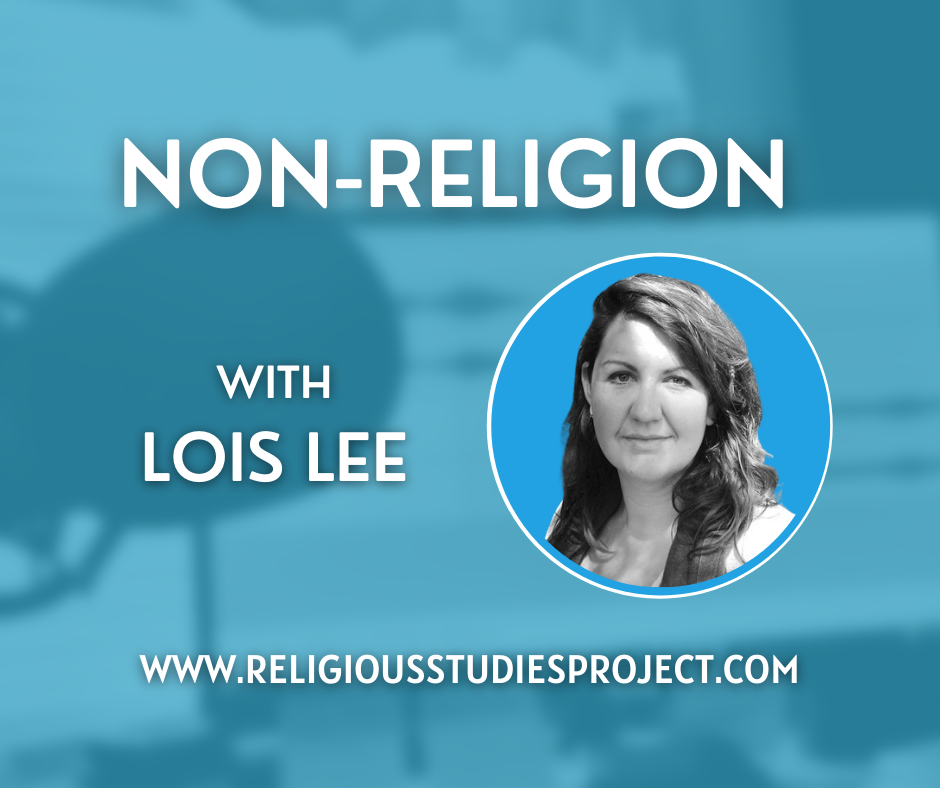 What is 'nonreligion'? Is it atheism? Is it secularism? Is it football? Today, Dr. Lois Lee, a leading scholar of nonreligion and the founding director of the NSRN, joins Chris and Ethan to discuss this emerging field of 'nonreligion' and critical methods for studying the 'nonreligious'. Tune in to learn more!

The two concepts of non-religion and secularity are intended to summarise all positions which are necessarily defined in reference to religion but which are considered to be other than religious. […This encapsulates] a range of perspectives and experiences, including the atheistic, agnostic, religiously indifferent or areligious, as well as some forms or aspects of secularism,  humanism and, indeed, religion itself. (Lee 2009)

It is fast becoming a tradition in ‘nonreligion’ research to acknowledge that Colin Campbell’s seminal call in Toward a Sociology of Irreligion (1971) for a widespread sociological analysis’ of ‘nonreligion’ had until very recently been ignored (Bullivant and Lee 2012). Although there has been a steady stream of output on secularisation, and more recently on atheism, these publications rarely dealt with ‘nonreligion’ as it is ‘actually lived, expressed, or experienced […]in the here and now’ (Zuckerman 2010, viii). One scholar who has been leading the way in theorising and empirically populating this emerging field is Lois Lee, the founding director of the Nonreligion and Secularity Research Network, who joins Chris and Ethan in this podcast, recorded in May 2012 in Edinburgh.

Dr Lois Lee is Associate Lecturer in Religious Studies and Sociology at the University of Kent. Her work deals with theories of thought and action in differentiated and highly mediated societies, and her empirical research has focused on British nonreligious and secularist cultures. She is recently completed her doctoral thesis at the University of Cambridge and is currently developing the thesis into a monograph, provisionally titled, Separating Sociologies: Religion, Nonreligion and Secularity in Society and Social Research. She was guest co-editor of a special issue of Journal of Contemporary Religion, entitled  ’Nonreligion and Secularity: New Empirical Perspectives’, with Stephen Bullivant (January 2012). She has publications in (or forthcoming in) the Annual Review of Sociology of Religion, Journal of Contemporary Religion, Studies in Ethnicity & Nationalism and Critique and Humanism, and will contribute to the forthcoming Oxford Handbook to Atheism (2013). Lois is founding director of the NSRN, the co-editor of its website, co-editor of the journal Secularism and Nonreligion (NSRN and ISSSC), and features editor for the LSE-based journal, Studies in Ethnicity & Nationalism (Wiley-Blackwell). She lectures and teaches the study of religion (and nonreligion), sociology of religion, social theory of modernity, introduction to sociology, and qualitative social research methods.

Lee’s basic definition of ‘nonreligion’ is ‘anything which is primarily defined by a relationship of difference to religion’ (Lee 2012, 131), yet related to this relatively simple definition are a host of conceptual, methodological and terminological issues. At an individual level, when they are given discrete options, many otherwise ‘non-religious’ individuals will inevitably self-categorise themselves using ‘religious’ labels (for a variety of different reasons, see Day 2011; Edgell, Gerteis, and Hartmann 2006). However, the labels that individuals utilise are rarely as important as the contexts in which they use them, their motivations for doing so, and the meanings attached to them. When permitted to select multiple (non-)religious identity terms, many welcome the opportunity to articulate multiple identities. Different identities may be enacted in different contexts (Cotter 2011b), and a superficial non-religiosity can mask beliefs and practices sometimes termed ‘spiritual’ by the individual in question. To complicate matters further, people are apt to utilise (non-)religious terminology in situations where their sacred values are (un)consciously called into question, yet for much of the time these sacred values and the associated terminology ‘lie dormant and, as such, invisible’ (Knott 2013).

Institutionally, there are many organisations which can be explicitly labelled as ‘non-religious’, each exhibiting a collection of distinct-yet-interrelated attitudes and emphases (see Pasquale 2010, 66–69; Cimino and Smith 2007, 420–422; Budd 1977, 266), and in which much of what actually happens on the ground is arguably mundane and/or secular. However, the non-religious tend not to join specifically non-religious groups (Bullivant 2008, 364), and it is therefore unclear how representative these groups are likely to be. Other public institutions – such as a museum, a hospital chaplaincy, or a ‘religious’ NGO –  can be similarly ambiguous. ‘Religious’ institutions are utilised by non-religious people for a variety of reasons (Day 2011), and if we attend to the materiality and embodiment of public and private social interactions it becomes clear that a sound, a smell, or the mere presence of another person, can change the sacred, profane or mundane nature of (non-)religious and secular experiences.

The ambiguities described in the previous paragraphs suggest that scholars attempting to engage with non-religion face particular terminological and methodological challenges. Terminologically, it is self-evident that the categories of ‘religion’ and ‘non-religion’ are ‘semantically parasitic categories’ (Fitzgerald 2007, 54). This relationship has led to a situation where the prevalent terminology used to refer to the non-religious in the social science of religion has often been ambiguous, imprecise, and even biased and derogatory (Cragun and Hammer 2011; Cotter 2011b; Pasquale 2007; Lee 2012). Methodologically, there is the attendant risk of constructing non-religion simply through the act of study. By asking questions specifically relating to (non-)religion, studies can exclude the possibility of (non-)religious indifference, whilst religion concurrently ‘serves as a “language” in which many people who may no longer be associated with any religious organisations still choose to express their strongest fears, sorrows, aspirations, joys and wishes’ (Beckford 1999, 25). The researcher must therefore be aware both of the limitations of the narrative interview, and of the different meanings attached to terms in different discourses (Stringer 2013). All of these issues and more are complicated by problems of locating potential research data for all but the most explicit forms of non-religion and by emergent problems in the assessment of religion-equivalent non-religious practices, and, indeed, the appropriateness of doing so (Cotter 2011a; Cotter, Aechtner, and Quack 2012). This interview with Lois Lee addresses these issues and more, and provides a valuable reflexive discussion on what ‘nonreligion’ is, and why we might be interested in studying it from a Religious Studies perspective.

The following quotation from Frank Pasquale serves as a suitable point of conclusion:

The closer people’s worldviews are probed – even among self-described secular or nonreligious individuals – the more difficult it is to neatly place many into the major categories that frame Western discourse on “theism” and “atheism” or “religion” or “irreligion” (2010, 63)

As we are all aware, study of ‘religion’ (and by definition, ‘nonreligion’) generally occurs within a Western, Christianised context which tends to assume a position of normative religiosity, and reify an academically constructed dichotomy between ‘religion’ and ‘nonreligion’. Whilst this interview (and many ongoing studies) focuses on one side of the ‘religion’-’nonreligion’ dichotomy, ultimately it can be seen as an attempt to ‘argue for the currently unfashionable side of [a] polar opposition, […] to unsettle the assumption that any polarity can properly describe a complex reality’ (Silverman 2007, 144).

Listener’s may also be interested in our previous interview with Callum Brown on Historical Approaches to Losing Religion, and with Linda Woodhead on the Secularisation Thesis.

A Word by Any Other Name: The Emergent Field of Non-religion and the Implications for Social Meaning

"As I write this response, I find myself in an inner struggle as a Social Scientist. In one sense Dr Lee’s podcast and my subsequent response beg a question of causation. For me the question has its origins in the psychological. Does atheism and/or agnosticism lead to secularization and by proxy non-religious systems of meaning? Or as a social movements continue to gain adherents, do we see a diffusion of new ideas."
PrevPrevious EpisodeDigital Religion
Next EpisodeAmerican MillennialismNext

How we can position the study of non-religion within the discipline of Religious Studies? In this episode, Chris Cotter is joined by Louise Connelly, Frans Jespers, Ethan Quillen, Steven Sutcliffe, and Teemu Taira to unpack the term 'non-religion'.

What do we talk about when we talk about religion? What do we recognize as essential and specific to any given faith, and why? In this lecture, I address these questions by drawing on fieldwork among humanists in Britain, paying particular attention to humanism’s relation to Christianity.