My first experience of Santo Daime occurred in 2005 during research for a book on the non-mainstream religious scene in Brazil (A. Dawson, 2007). Pretty much unprepared for the sensory feast of a Santo Daime ritual, I was visually struck by the colourful ‘uniforms’ and brightly decorated ceremonial space. The strongly rhythmical and fervently sung ‘hymns’ also made an impact, as did the powerful smell and bitter taste of the religious sacrament which practitioners call ‘Daime’. A psychoactive beverage more commonly known as ‘ayahuasca’, the sacrament of Daime and its psychotropic effects further added to the intense sensory stimulation which abides as an enduring memory of my earliest encounter with Santo Daime. Staged within the mountainous terrain of a national park hundreds of miles north of São Paulo, the ritual contents and format originally forged in the Amazon region of north-west Brazil did not seem particularly out of place. However, unlike the poor, mixed-race community which first elaborated Santo Daime as part of its semi-rural subsistence lifestyle, the ritual participants with whom I was celebrating were overwhelmingly drawn from Brazil’s predominantly white urban middle class. Whereas the uniforms, songs and sacrament were very much of the Amazon region, those wearing, singing and consuming the ceremonial accoutrements of Santo Daime certainly were not. By no means discordant, the juxtaposition of Amazonian origins and urban-professional appropriation nevertheless piqued my academic interest. (Dawson 2013, 1) 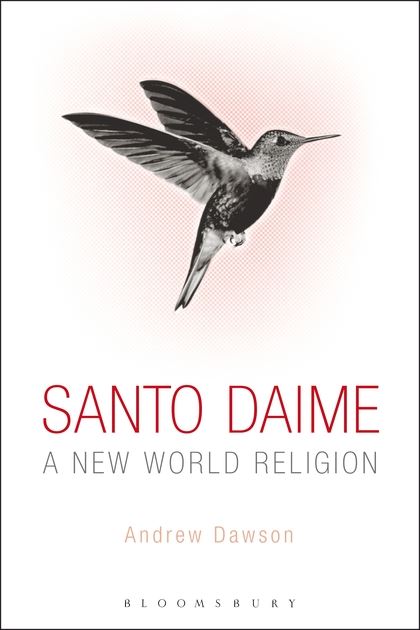 Upon receiving an email notification through the BASR mailing list about Andrew Dawson’s recently published monograph, Santo Daime: A New World Religion, the RSP’s academic interest was certainly piqued. Thus, towards the end of May 2013, Chris made the arduous journey from his office at one end of B Floor, County South, Lancaster University, to Dr Dawson’s at the other, to discuss this fascinating and engaging book, Santo Daime in general, the various ethical problems associated with conducting this kind of field research, the intentionally multifaceted subtitle ‘New World Religion’, and much more.

You can also download this interview, and subscribe to receive our weekly podcast, on iTunes. If you enjoyed it, please take a moment to rate us. And remember, you can use our Amazon.co.uk or Amazon.com links to support us at no additional cost when buying your important books etc. Remember… Christmas is on the way!

“If we want to discover what [wo]man amounts to, we can only find it in what [wo]men are: and what [wo]men are, above all other things, is various. It is in understanding that variousness – its range, its nature, its basis, and its implications – that we shall come to construct a concept of human nature that, more than a statistical shadow, and less than a primitivists dream, ...

"The assertion that an experience which takes place while under the influence of a drug should not be construed as having religious import implicitly makes a value-judgment about what true or valid religion can consist of, whereas an examination of how hermeneutic and discursive resources are drawn upon to develop a personal or communal account in which drugs and the experiences they elicit are ‘deemed religious’ (Taves 2009) is likely to provide significantly more analytical purchase."
PrevPrevious EpisodeBelief, Belonging, and Academic Careers
Next EpisodeD. Mitra Barua on Immigrant Buddhism in the WestNext

What counts as 'world religions' and how do we engage or promote this category in the academic study of religion. Join James Cox and David G. Robertson as they unpack this category.