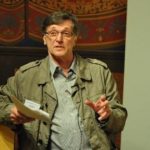 Our interview this week features Chris speaking to Professor Donald Wiebe from the Faculty of Divinity at Trinity College in the University of Toronto on the relationship between Theology and Religious Studies.

Ed. note. Out of necessity this interview was not recorded on our normal equipment, and we apologise for the poorer quality of the sound this week.

The relationship between Theology and Religious Studies  is not a simple one. David Ford writes that at its broadest, theology is thinking about questions raised by and about religions (2000:3). These questions are largely directed towards notions of transcendence (typically gods), incorporate doctrinal issues and are “essentially a second-order activity arising from ‘faith’ and interpreting faith” (Whaling, 1999:228-229). Essentially, theology is thinking about religion from within religion – although when most people refer to “Theology”, what they mean is “Christian Theology”.

It is generally accepted – at least as far as most academics are concerned – that there is a distinct difference between religious studies and theology. This is succinctly summarised by Ninian Smart’s statement that “historical and structural enquiries, such as sociology, phenomenology, etc., […] are the proper province of [the study of] Religion, and the use of such materials for Expressive ends […is] the doing of Theology” (in Wiebe, 1999:55).

As you shall see from this interview, however, things are much more complicated, and Professor Wiebe is particularly qualified to present his own take on the relationship between these two distinct disciplines. His primary areas of research interest are philosophy of the social sciences, epistemology, philosophy of religion, the history of the academic and scientific study of religion, and method and theory in the study of religion. He is the author of a number of books, including Religion and Truth: Towards and Alternative Paradigm for the Study of Religion (1981), The Irony of Theology and the Nature of Religious Thought (1991), and, of particular relevance to this interview, The Politics of Religious Studies: The Continuing Conflict with Theology in the Academy (1999). In 1985 Professor Wiebe, with Luther H. Martin and E. Thomas Lawson, founded the North American Association for the Study of Religion, which became affiliated to the IAHR in 1990; he twice served as President of that Association (1986-87, 1991-92).

This interview was recorded at the European Association for the Study of Religions‘ Annual Conference in Budapest in September 2011, where Professor Wiebe also presented a particularly relevant paper with his colleague Luther H. Martin, entitled “Religious Studies as a Scientific Discipline: The Persistence of a Delusion”. Out of necessity it was not recorded on our normal equipment, and we apologise for the poorer quality of the sound this week.

Jonathan Z Smith: “[R]eligion is an inextricably human phenomenon. […] Religious studies are [therefore] most appropriately described in relation to the Humanities and the Human Sciences, in relation to Anthropology rather than Theology. What we study when we study religion is one mode of constructing worlds of meaning, worlds within which men find themselves and in which they choose to dwell.” (1978, Map is Not Territory, 290)

Wiebe, Donald, 1999. The Politics of Religious Studies: The Continuing Conflict with Theology in the Academy. New York: St Martin’s Press.

The barrier of the Temple Garment both shapes and impedes the outward creation of the identity of the Mormon woman.

"No matter where we do our reading, we bring ourselves to the task," writes Dr. Allison L. Gray in this response to our interview with William Arnal on "Ancient Christian Origins"

Sufism is a paradox?

While the tendency to think of Sufism as a kind of individualized or more private form of Islam is quite prevalent, the representation of Sufism as a form of 'peaceful Islam' or as a 'solution' to the 'problem' of radical Islam is equally pervasive. In his interview with the Religious Studies Project, Milad Milani gives a thoughtful overview of the tradition of Sufism, answering big questions such as: what is Sufism, how did it emerge historically (see Milani 2013),...

Wiebe begins his interview by admitting that it may not be possible to clearly delineate religious studies and theology, an admirable concession which seems to lull the listener into the false belief that he is promulgating an understanding of the ‘dichotomy’ which understands the malleable nature of both academic disciplines and the relationship between them. Unfortunately, ...
PrevPrevious EpisodeInvented Religions
Next EpisodeAnimismNext

Of Demons, Saints and Heaven: Andean religious beliefs in Peru

In his interview with Sidney Castillo, Dr. Luis Millones discusses some of the traditions that have formed the basis for his research, particularly in the northern coast, northern highlands and south highlands of Peru. He mentions that, with the impact of colonization,...

Muslims, NGOs, and the future of democratic space in Myanmar

The critical situation of the Rohingyas has cast a shadow over Myanmar’s process of democratization and drawn attention to some aggressively un-civil sectors of this Buddhist majority country’s Muslim minority population. In this interview with Melissa Crouch, ...