The foundation of irreligious criticism is: Man makes religion, religion does not make man. Religion is indeed the self-consciousness and self-esteem of man who has either not yet won through to himself or has already lost himself again. But man is no abstract being squatting outside the world. Man is the world of man, state, society. This state and this society produce religion, which is an inverted consciousness of the world, because they are an inverted world. Religion is the general theory of this world, its encyclopedic compendium, its logic in popular form, its spiritual point d’honneur, its enthusiasm, its moral sanction, its solemn complement and its universal basis of consolation and justification. It is the fantastic realization of the human essence since the human essence has not acquired any true reality. The struggle against religion is therefore indirectly the struggle against that world whose spiritual aroma is religion.

Religious distress is at the same time the expression of real distress and the protest against real distress. Religion is the sigh of the oppressed creature, the heart of a heartless world, just as it is the spirit of a spiritless situation. It is the opium of the people.

This famous quotation from German political philosopher Karl Marx’s unfinished Critique of Hegel’s Philosophy of Right (1843) encapsulates his controversial and complex understanding of the social function of religion. It was a significant part of his theory of alienation – the worker was, in capitalist society, separated from their labour and its products; work had become outside of them, alien. Religion was part of the mechanism by which the bourgeois perpetuated this alienation and therefore the capitalist status quo. Life was unfair, but this was the price of entry into Heaven when you die. As Marx saw it, when the workers were no longer alienated from their work and society made equal, there would be no need for religion, and it would die away.

The theory, and in particular the decontextualised soundbyte, “Religion is the opium of the masses”, was practically a matter of faith among the left-leaning liberal intelligentsia of the 60s and 70s, but the popularity of Marxist analyses of religion (and society in general) lost capital during the 80s and early 90s with the fall of the USSR and the Berlin Wall. What place, then, do his theories have in the contemporary academy, given society’s reawakened concern with inequality? Marx’s theory anticipated both the work of Émile Durkheim, founder of sociology, and an emphasis on power relations which would later be picked up by post-structuralist theorists including Foucault and Bourdieu, all of whom have a profound.influence on contemporary studies of religion. 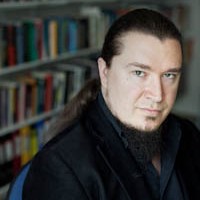 Titus Hjelm is Lecturer in Finnish Society and Culture at the School of Slavonic and East European Studies at University College, London. His doctoral dissertation, at the University of Helsinki, was on the construction of Satanism in the Finnish news media. His research interests are wide-ranging, however, and include the sociology of religion, news media, popular culture (particularly the Nordic heavy metal scene and vampire fiction), and social theory, including Marxist theories. His two most recent books are Perspectives on Social Constructionism (Palgrave Macmillan, 2010) and an edited volume titled Religion and Social Problems (Routledge, 2010). He is also bass guitar player for Thunderstone.

Apologies too for the background noise – we got locked out of our office.

Could the difficulties associated with the academic conceptualisation of "religion" be overcome by changing our focus instead to "the sacred"? Jay Demerath tells Chris why we should define religion substantively - that is, in terms of specific attributes like rituals, deities or dogmas - but the sacred in terms of the function it serves in the lives of individuals and cultures.
PrevPrevious EpisodeAriela Keysar on “What does ‘belief’ mean to Americans?”
Next EpisodeVernacular ReligionNext

Sociological research has followed two broad paradigms – qualitative and quantitative. Qualitative studies seek depth, typically based on interviews and observation with a relatively small pool of subjects. Quantitative studies, on the other hand, survey a larger pool – in some cases, such as the UK National Census, practically the entire population of a country – relying on mass methods such as questionnaires with a limited set of questions and responses.