Over the course of the last few decades religious violence has become an increasingly salient topic of public discourse and particularly in its global manifestations. In the social sciences these discourses focus primarily on explanations of violent acts that are driven by the socio-political contexts enveloping them.

Over the course of the last few decades religious violence has become an increasingly salient topic of public discourse and particularly in its global manifestations. In the social sciences these discourses focus primarily on explanations of violent acts that are driven by the socio-political contexts enveloping them. Mark Juergensmeyer argues that such explanations only tell part of the story, however, since some actions are motivated by a religious vision, like the vision of “cosmic war.” Talking to Per in this podcast Juergensmeyer explains how a “sociotheological approach” is particularly well suited to the task of understanding religious violence by engaging the worldviews of violent actors directly and taking their theological concerns as seriously as their political ideologies. 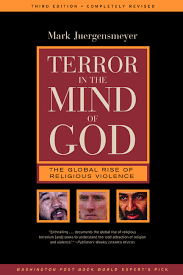 Mark Juergensmeyer is a former president of the American Academy of Religion and the current director of the Orfalea Center for Global and International Studies at the University of California, Santa Barbera where he also teaches sociology and religious studies. He is a prolific writer and speaker whose work deals with South Asian religion and politics, religious violence and global religion among other topics. Recent books include Terror in the Mind of God: The Global Rise of Religious Violence, Global Rebellion: Religious Challenges to the Secular State, and the just released The Oxford Handbook of Religion and Violence, which contains a chapter outlining, “A Sociotheological Approach to the Study of Religious Violence.”

The Fate of Earthly Things

In this interview, Molly Bassett begins by introducing us to the world of Middle America, the sources scholars use today to study this period and its cultures, and then describes the benefits and challenges of teaching with Meso-American materials. Her students learn not only to challenge the categories scholars use to describe religious ideas like "god," ...

Ninian Smart was a proponent of the idea that Religious Studies should be "poly-methodical"; but should Religious Studies as a discipline incorporate theories and methodologies from multiple other disciplines, such as sociology, anthropology or history? When RS departments have run on an interdisciplinary basis, have they been successful?
PrevPrevious EpisodeThe ‘Persistence’ and ‘Problem’ of Religion
Next EpisodeReligion and GlobalizationNext

Ariela Keysar on “What does ‘belief’ mean to Americans?”

'Belief' lies at the core of E.B. Tylor's canonical definition of religion as belief in 'spiritual beings'. However, in the last decades of the twentieth century the concept became unfashionable in the social sciences, with scholars from all parts of the world denouncing its centrality as a Western, Protestant bias which has limited application to other religions. Ariela Keysar disagrees...

Os serés matáves: Pentecostalism in the Prisons of Rio

For Brazil’s “killable people”, there are two prevalent ways to deal with the relative hell of prison - both involving allegiance and devotion. You can give your life to the gang or give your life to God. Only three types of people dare to venture into the heart of a Minas Gerais prison: the condemned, the pentecostal pastors leading the prison ministry, ...