Using Archaeology to Learn about Christian Diversity and Martyr Shrines

Sarah Griffis highlights how Morehouse demonstrates the central issue of studying diverse social groups in antiquity: "how do you get something new out of what’s already there before it? Whatever it is that’s new needs to be intelligible enough to be compelling and persuasive." 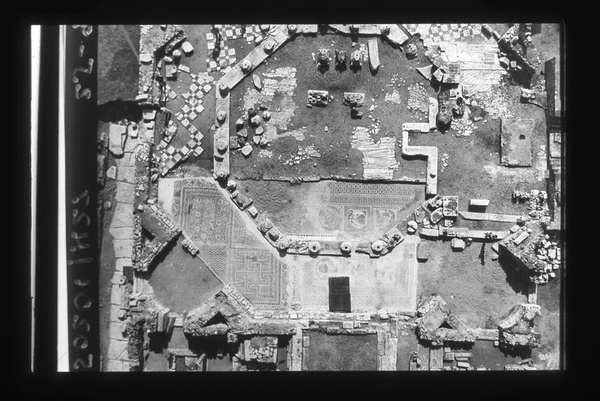 Sarah Griffis is a Visiting Assistant Professor of Religious Studies at Hamilton College in Clinton, New York. Her work focuses on early Christians’ relationship with the classical past. Most recently, she has attended to the crafting of Christian texts, especially martyr literature, as a practice of both forming distinctively Christian ideology and legibly inscribing this ideology in forms indebted to classical tradition. An exploration of Christian thinkers’ explicit invocation of this literary and performative past can be found in her article, “Christian Interaction with Greek Tragedy in the Second and Third Centuries,” in Classical Outlook.

Sarah Griffis is a Visiting Assistant Professor of Religious Studies at Hamilton College in Clinton, New York. Her work focuses on early Christians’ relationship with the classical past. Most recently, she has attended to the crafting of Christian texts, especially martyr literature, as a practice of both forming distinctively Christian ideology and legibly inscribing this ideology in forms indebted to classical tradition. An exploration of Christian thinkers’ explicit invocation of this literary and performative past can be found in her article, “Christian Interaction with Greek Tragedy in the Second and Third Centuries,” in Classical Outlook.

Using Archaeology to Learn about Christian Diversity and Martyr Shrines

Nathaniel Morehouse’s interview on early Christian diversity and martyr shrines in the fourth century was such a delight, and wove together multiple topics that interest me both in my research and in my teaching. I want to tie together two insights he offered: first, Morehouse remarked that shrines of martyrs can teach us about the lives of regular Christian worshippers. Second, early Christians in all of their own diversity were really comfortable in and familiar with a religious landscape that itself was incredibly diverse. I want to use one specific example as a way of building upon both of these really important themes that can help us think about Christianity in the fourth century, and by doing so I want to exercise a methodology that’s been really influential in my work and training: archaeology.

Morehouse used the helpful example of Rome in his interview, a city that offers us rich evidence of Christianity in its first few centuries and is associated with ritual practice around the remains of Peter and Paul. I want instead to use the example of Philippi, a small town in the ancient province of Macedonia—that’s in northeast Greece, pretty close to the western Turkish border. Philippi is well known to Christians because it’s a town the apostle Paul visited and we still have a letter addressed from Paul to the congregants there; it’s in the New Testament. It’s also the perfect site to explore the topics from Morehouse’s interview to which I’d like to add more data.

At Philippi the footprint of a fourth-century church called “the Octagon” was excavated. It’s named for its shape, which will become important in a moment.

The church is part of a complex whose prominent placement in the center of the town tells us it was busily trafficked and highly visible. What’s super interesting about this church is that throughout its multiple building phases it continued to incorporate the preexisting structure of a “pagan” heroon (pronounced “hero” [rhymes with “pharaoh”] + “on”): a shrine dedicated to a traditional Greek hero. This shrine was really old by the time the Christian church began to be built—it was probably built in the second or third century BCE, which means it had enjoyed a lengthy history as a site of cult worship by the time Christian structures started to spring up. And I don’t mean that this hero worship site and the Octagon were just built side by side—I mean that the south wall of the hero shrine was the north wall of this church. The church literally built the hero shrine into its material structure, and we know it was intentional because the first church onsite, a basilica, burned down, and even in rebuilding it, the heroon wall was retained as a wall of the church.

Here’s where we get to see the principles at work that Morehouse introduced, at one individual site: the merging of religious identity that Philippi’s archaeological remains puts on display illuminates the lives of ordinary Christian worshipers, and what it shows us about them is that these early Christians had no difficulty existing—materially even—right alongside non-Christians. This is because the towns in which Christianity first developed were simply incredibly religiously diverse. It’s just how things were. Some scholars are convinced that these two cults were celebrated side by side at the same time. And here’s where the octagon shape of the church becomes important. We know that the octagon shape is especially associated with martyria—that is, the same kind of hero-worship at a shrine, but now devoted to a Christian martyr. We don’t know whose it was (some scholars are convinced it was Paul’s!), but what the archaeology puts on display to us is an overlap, temporally and spatially, in worship of heroes, both Christian and non-Christian. Some scholars think the worship of Christian martyrs supplanted hero worship of an earlier time, but if that’s true, it was a gradual process. Certainly simultaneous side-by-side practice is plausible, and to bring a figure into the discussion whom Morehouse also referred to, Julian the Apostate remarked on the astonishing similarities between hero and martyr worship. What this teaches us is that while Christians were one internally diverse group among a large number of different religious groups living alongside one another in ancient cities, their practices around the remains of their beloved dead had much in common with those of their differently-affiliated neighbors. We can infer from this that the lives and practices of early Christian worshippers were really legible to non-Christians as well.

The general concept here is something all historians are concerned with, especially historians of the ancient world who often attend to a long stretch of history and its changes in empire, politics, and religion: how do you get something new out of what’s already there before it? Whatever it is that’s new needs to be intelligible enough to be compelling and persuasive. Christians, internally diverse groups on their own, would argue over how to relate to their past. At the same time they could be seen on the whole as a separate group in a larger landscape of incredible religious diversity. Philippi’s delightful and strange architectural remains help us to ponder this diversity through specific attention to the practice of hero worship.

For studying Philippi, Charalambos Bakirtzis’s chapter “Paul and Philippi” in Philippi at the Time of Paul and After his Death is crucial reading; so is Eduard Verhoef’s article “Syncretism in the Church of Philippi.” More broadly on archaeology as a way of learning about religious diversity in antiquity, especially around death-related practices, I’ve learned so much from my teacher, Laura Nasrallah, and my colleagues, especially Sarah Porter. If you want to learn more about what archaeological remains can teach us about the early Christianity we read about in texts like the New Testament, Nasrallah’s book Archaeology and the Letters of Paul is such an excellent starting place. Porter introduced me to a book that touches on the topic of gender and practices around martyrs’ remains, a topic Morehouse also briefly discussed: Nicola Denzey Lewis’ The Bone Gatherers: The Lost Worlds of Early Christian Women.