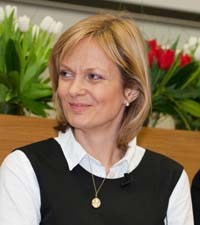 Linda Woodhead is Professor of Sociology of Religion in the Department of Politics, Philosophy and Religion at Lancaster University. She has published widely on the growth, decline and transformation of religions in modern times; in Christianity, in An Introduction to Christianity (CUP 2004) and A Very Short Introduction to Christianity (OUP 2004), and as co-editor of Religions in the Modern World (co-edited with Koko Kawanami and Chris Partridge). In The Spiritual Revolution (Blackwell 2005, with Paul Heelas) which grew out of the Kendal Project, she considered the significance of 'alternative' spirituality and reasons for its rapid growth since the 1980s. She is also particularly interested in issues of gender and has written several articles on the reasons for women's preponderance in spirituality, including a 'gendering' of the secularisation thesis.

Until 2013, Linda was Director of the £12m UK research programme, the AHRC/ESRC Religion and Society Programme. She is also the co-founder of the Westminster Faith Debates.