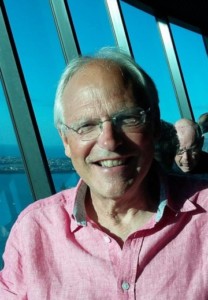 James Cox is Emeritus Professor of Religious Studies in the University of Edinburgh, Scotland and Adjunct Professor in the Religion and Society Research Cluster at Western Sydney University, Australia.  In 2006, he was awarded a Personal Chair in Religious Studies in the University of Edinburgh. He has held prior academic posts at Alaska Pacific University, the University of Zimbabwe and Westminster College, Oxford.  His monographs related to Indigenous Religions include From Primitive to Indigenous: The Academic Study of Indigenous Religions (2007), The Invention of God in Indigenous Societies (2014), and Restoring the Chain of Memory: T.G.H. Strehlow and the Repatriation of Australian Indigenous Knowledge (2018). Currently, he is working on an international project addressing issues dealing with the ownership of Indigenous Knowledge and the responsibility of academic researchers to Indigenous populations.

This RSP Remix answers the question "What is the world religions paradigm?" with an abridged version of our 2013 interview with James Cox.

The African Shaman: Some Qualifications

Research methods are at the crux of James Cox's response to Episode 334. " By combining the techniques of epoché and empathetic interpolation," Cox argues, "the researcher conveys respect for the beliefs, practices, and alternate therapies forming the African worldview without either sanctioning or refuting them."

The Legacy of Edward Tylor - Roundtable

This roundtable recorded at the annual BASR conference at the University of Chester 2017 brought together a group of scholars interested in different perspectives on the legacy of Tylor. Topics discussed included his impact on indigenous societies, the debates over animism,

By defining Indigenous Religions as focused primarily on ancestors and as rooted in location, I have restricted the term in a way that then opens up wide permutations of ancestral and localised traditions as they are affected by modernity, globalisation, travel and mass communication, including indigenous people living in diaspora...

After the World Religions Paradigm...?

In this week's podcast, We discussed some of the problems with the World Religion paradigm, most notably its colonial heritage and Christocentrism. Given its dominance in the public perception of "Religion", however, can we as teachers get away from it? Is there a pedagogical approach which focusses on issues of power and domination, and challenges, rather than reinforces, ...

What counts as 'world religions' and how do we engage or promote this category in the academic study of religion. Join James Cox and David G. Robertson as they unpack this category.

Editors' Picks 2: The Phenomenology of Religion

The second of our Editors' Picks "repodcasts", and this time Jonathan has chosen our interview with James Cox on the Phenomenology of Religion. It was, incidentally, also our very first podcast, originally broadcast on the 14th of January, 2012. Jonathan also wrote the response to this interview, entitled “What is Phenomenology?“.

The Phenomenology of Religion