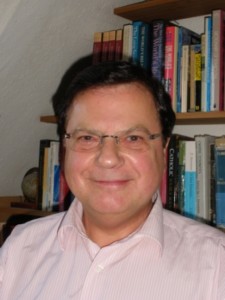 George is a long-term friend of the Religious Studies Project and is Honorary Research Fellow at York St John University and at the University of Birmingham, having been Head of Religious Studies at the University of Wolverhampton from 2001 until 2008. He has written extensively on new religious movements, especially Jehovah’s Witnesses. Recent publications include Historical Dictionary of Jehovah’s Witnesses (2008), The Bloomsbury Companion to New Religious Movements (co-edited with Benjamin E. Zeller, 2014), and Jehovah’s Witnesses: Continuity and Change (2016). George is Co-Vice Chair of Inform (Information Network on Religious Movements), based at the LSE, and founded by Eileen Barker in 1988. George is also on various editorial boards and panels, and is currently co-editing an anthology entitled The Insider-Outsider Debate, together with Stephen Gregg. He is also editing an anthology for the Routledge/Inform series, entitled Minority Religions in Europe and the Middle East, which is in its final stages. George was editor of the BASR Bulletin from 2002 to 2006 and was made an Honorary Member of BASR in 2009.

This 2017 mid-year special's game "Scrape My Barrel"—which has absolutely no connection to the popular BBC gameshow "Call My Bluff"—features two teams of religious studies scholars pitted against each other in a battle of definitions, pedantry, creativity, deception, performance and ‘wit’. Tune in to find out whether the 'established' scholars (George Chryssides, Dawn Llewellyn, and Paul-François Tremlett) or the ‘up-and-coming’ baristas... sorry, RS scholars (Vivian Asimos, Liam Sutherland, and Amy Whitehead) win bragging rights this year!

Ex-member testimony can be a difficult to deal with. Such testimony tends to receive privileged treatment in anti-cult literature, while some academics are prone to be sceptical, even suggesting ex-member testimony is worthless due to the danger of adaption and fiction.

The Insider/Outsider problem, relating to where scholars position themselves relating to the subject matter (whatever that may be), is one of the most perennial problems in the academic study of religion. Does one have to be a member of a community for your testimony about that community to be valid? Or does your membership of the community invalidate your objectivity?