Supernatural horror’s depiction of religion takes place note only within fantastic spaces but can also depict the uncanny elements of religious belief within an otherwise recognizable “heimlich” space. 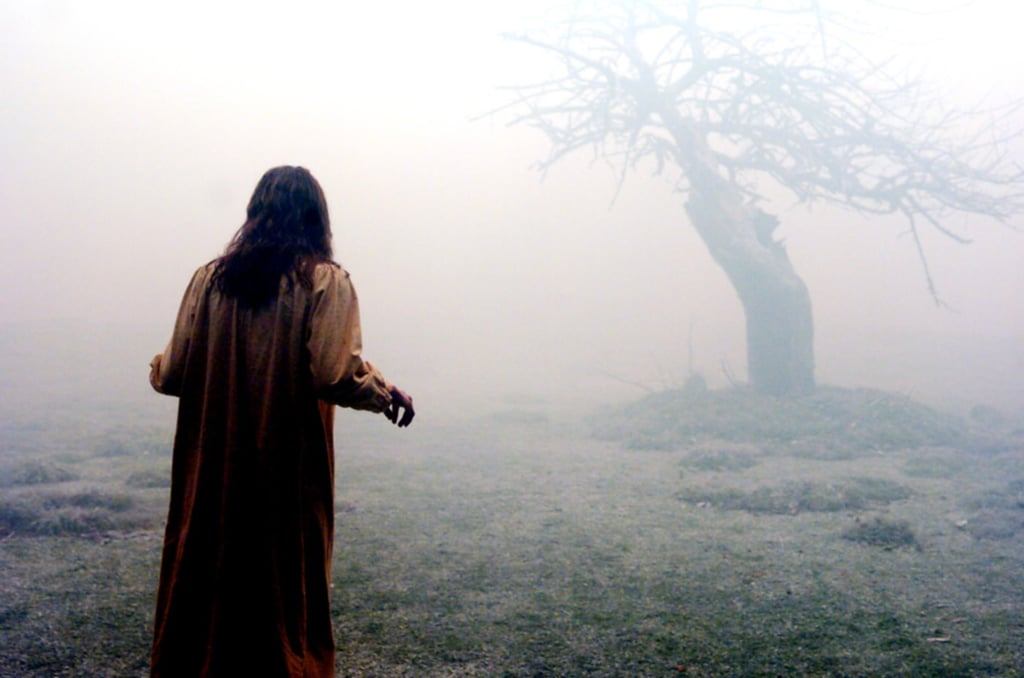 Though often marginalized as a popular pursuit, the genre of supernatural horror has an important place in American history and culture and, in particular, reflects the American relationship with religion. In his current scholarship about Stephen King, Douglas Cowan highlights the ways in which popular culture engages with the “properly human questions” that have traditionally been associated with theology, questions about life and death, good and evil.  Indeed, supernatural horror not only portrays the specific “unnatural narratives” found in religious scripture, but also engages with Cowan’s properly human questions in ways that reflect specific scriptural and theological writings. In supernatural horror film and television, elements of Christian religious observance are often used to signal the fantastic, Tzevetan Todorov’s word for the “hesitation experienced by a person who knows only the laws of nature, confronting an apparently supernatural event.” [1] Horror in particular focuses on the area of the fantastic known as the “uncanny”, Sigmund Freud’s “unheimlich” or “unhomely”,  “the opposite of what is familiar”[2], but without the appeal of the unfamiliar, invoking instead secrecy, strangeness, and the occult, the hidden, that which cannot be trusted.[3]  Religious and scriptural narratives are, needless to say, filled with fantastical, supernatural and uncanny events; and the theological texts that explain religious beliefs also make reference to the fantastic and the uncanny. Because of their ubiquity in American culture, Christian beliefs and scriptural narratives are both familiar and strange, “heimlich” and “unheimlich”, making them perfect fodder for horror narratives.  Horror’s engagement with specifically religious texts, both scripture and theology, is evidenced in many recent films and television series.

Among the most popular scriptural narratives reflected in horror are those to do with angels, demons and Satan. In seasons four and five of the television series Supernatural, [4] the narrative concerns the War in Heaven, a Christian concept, briefly mentioned in the New Testament Book of Revelation and fleshed out by Biblical commentators and scholars in the early Christian and medieval periods, as well as in John Milton’s Paradise Lost. Supernatural sets up parallels between the heroic Winchester brothers and the angelic “brotherhood,” especially through the archangel Michael and the fallen angel Lucifer, Milton’s name for Satan used in some translations of Isaiah 14:12  (“How art thou fallen from heaven, O Lucifer, son of the morning! how art thou cut down to the ground, which didst weaken the nations!” (KJV) ). In the Bible, the events of the Fall of Satan and the Apocalypse are not presented in a linear or necessarily literal fashion but reconstructed by early commentators (and later by Milton) from a number of Biblical passages. Ezekiel 28:12, Jude 1:6, 2 Peter 2:4, and Revelation 12:9* are also understood by Christian commentators as references to Satan’s rebellion against God and the angels’ subsequent ejection from heaven at the hands of the Archangel Michael.  Revelation 20 then envisions another battle, an apocalyptic one, in which Michael and the good angels fight Satan in order to bring about the Second Coming of Christ.

Supernatural’s fourth and fifth season narrative arc posits that the literal apocalypse is now upon us. Sam (Jared Padalecki) and Dean (Jensen Ackles), have been groomed since birth to be the vessels of brothers Lucifer (Mark Pellegrino) and Michael (Matthew Cohen 5:13, Jake Abel 5:22) for the final battle. Now in its 14th season, Supernatural continues to engage with Judeo-Christian religious narratives and eschatology, incorporating concepts such as Purgatory, the Leviathan of the Book of Revelation, the character of Lilith, and, most recently, God’s sister Amara, also known as the Darkness, a personification of the pre-Creation darkness in the Genesis story.

As these later seasons of Supernatural show, the engagement with religious texts goes beyond simply reproducing specific narratives. Many recent films and television series have used their understanding of scripture and theology to question religious assumptions. Again dealing with angels and demons, and released ten years apart, the films The Prophecy (1995) and Constantine (2005) posit a narrow distinction between the angelic and the demonic and satanic, giving us not just expressly evil “fallen” angels but also supposedly “good” angels who do evil deeds even while seeing themselves as performing God’s will. This depiction reflects Christian scriptural and theological texts in which angels are seen as beings of pure spirit meant to carry out God’s will, even when it leads to destruction.  In these films, good angels behave monstrously despite, and indeed because of, their professed love for God – as well as their entrenched belief in their own unalterable goodness. By contrast, the fallen angel Lucifer, or Satan,  is portrayed as the more honest and rational of the angels, as a sometime ally of humans and as the character most likely to follow God’s rules. At the same time, this filmic Satan’s power is limited in that it always depends on the consent of human beings, again reflecting theological concerns. In Constantine and The Prophecy, we see the progenitors of the ‘Satan as hero’ trope, originating with Milton and now familiar from television shows such as Lucifer.

Supernatural horror’s depiction of religion takes place note only within fantastic spaces but can also depict the uncanny elements of religious belief within an otherwise recognizable “heimlich” space. Early scenes of The Exorcist and Rosemary’s Baby establish the character’s ordinary lives taking place in fully evoked and familiar locations – Washington DC’s Georgetown area and Manhattan respectively.  These will soon be transformed into fantastic uncanny spaces with the intrusion, and reality within the narrative, of the more arcane elements of religious tradition and belief. These depictions of Satan and demonic possession often portray the experience of supernatural evil through the eyes of a skeptic.  Indeed, possession films contain two narratives: the liberation of the possessed person from the demon’s power; and the skeptic’s eventual acceptance of the fact of supernatural evil (at least within the world of the film) and thus the powerlessness of reason and science to defeat the Devil. Depicted from the point of view of agnostic lawyer Erin Bruner (Laura Linney), The Exorcism of Emily Rose (2005) emphasizes this notion by advertising the film’s connection to actual events.

Still other horror narratives approach skepticism through the argument between faith and reason, and the attempts to reconcile them, that found voice in the work of Thomas Aquinas among many others. This argument – both properly human and specifically religious —  is thematically and narratively central to The X Files television series and films and can be seen specifically in skeptic Dana Scully’s (Gillian Anderson) evolution from nonbeliever to character of faith, even as she holds on to her scientific skepticism.[5] Scully’s reawakening to religious belief is hinted at after her abduction in season two, begins in earnest during the investigation of a series of religiously motivated killings in season three, and continues throughout her subsequent battle with cancer and the loss of her daughter and is tested and to some degree resolved in the most recent film in series, The X-Files: I Want to Believe (2008). In almost all these episodes, narrative reference is made to elements of Scully’s Catholic upbringing, including the sacrament of reconciliation, the lives of the saints, and angels and the afterlife. Scully’s gradual acceptance that ‘the truth is out there’ – both religious/spiritual truth and the truths about the paranormal insisted upon by her partner Fox Mulder (David Duchovny) – is portrayed at least in part a result of her return to Catholicism.

On the other hand, reason is narratively absent from the recent horror film The Witch: A New England Folktale, which depicts a family of 17th Century Puritan settlers besieged and eventually destroyed by the machinations of Satan, who – along with the witch of the title — are portrayed as at least possibly real within the context of the film.  Throughout The Witch, characters engage in prayer as well as in theological discussions having to do with the faith, damnation, confession and forgiveness. Moreover, The Witch engages specifically with religious subjects not only in its storyline but in its dialogue, parts of which are taken directly from 17th century documents.

Above, Anya Taylor-Joy from The Witch.

Although this article has focused mainly on horror’s engagement with Christian and to a certain extent Judeo-Christian narratives and arguments, these filmic and televisual narratives are only a few of those that engage directly with profound human concerns through reference to specific religious texts. Arguments can and have been made for and against the sincerity of this engagement, as well as its theological accuracy (at least in some cases) but these films and television series remain evidence of the continued resonance of age old religious ideas as well as the intellectual and spiritual curiosity inherent in the genre of supernatural horror.

* The Biblical Book of Revelation is also called The Apocalypse, particularly in Catholic versions of the Bible, but the more common term, Revelation, is used here.

[4] Hansen, Regina. “Deconstructing the Apocalypse? Supernatural’s Postmodern Appropriation of Angelic Hierarchies”, Eds. George, Susan and Hansen, Regina, Supernatural, Humanity and the Soul: On the Highway to Hell and Back, New York, Palgrave, 2014, 13-26.