If neither of these concepts, physical or mental continuity between reincarnations, are theologically incorrect, it’s hard to make the case that they are borne out of some more fundamental agent-recognition cognitive structures. Foremost, I want to commend Dr. Claire White on her research on the cognitive science of reincarnation beliefs. Examining how humans cognitively recognize agents based on the continuity... 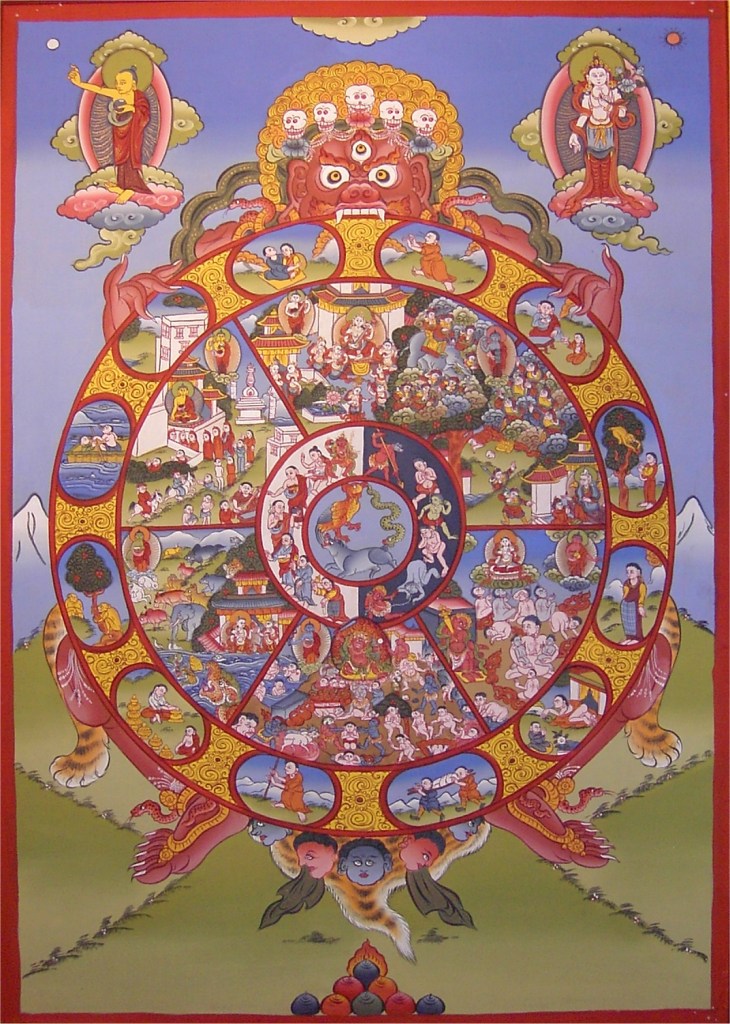 Jed is a doctoral student in Religious Studies at University of California, Santa Barbara. Particularly, he is interested in how Buddhist attempts to negotiate epistemology and ontology may have important ramifications on modern day debates about consilience. His studies explore how cognitive structures discovered with the help of cognitive science can help bridge scientific ontology with epistemological discoveries found by Western philosophers. Because similar debates arose in the Tibetan Buddhist literature, Jed believes the fruit of those debates can be helpful in bridging this theoretical gap.

Jed is a doctoral student in Religious Studies at University of California, Santa Barbara. Particularly, he is interested in how Buddhist attempts to negotiate epistemology and ontology may have important ramifications on modern day debates about consilience. His studies explore how cognitive structures discovered with the help of cognitive science can help bridge scientific ontology with epistemological discoveries found by Western philosophers. Because similar debates arose in the Tibetan Buddhist literature, Jed believes the fruit of those debates can be helpful in bridging this theoretical gap.

Foremost, I want to commend Dr. Claire White on her research on the cognitive science of reincarnation beliefs. Examining how humans cognitively recognize agents based on the continuity of certain attributes is an ingenious way to explore the criteria people intuitively construct for the continuity of agents across lifetimes. It solves the difficult problem of operationalizing belief in reincarnation to make it available for scientific study. While I applaud the project and its initial hypothesis, some of the methodology seems to reflect an incomplete understanding of the religious doctrine it is attempting to link with fundamental cognitive processes.

Dr. White identifies the continuity of physical traits and memories as telltales by which the continuity of an agent between lives is typically identified. From her research, Dr. White shows that if participants are asked how they would determine someone is a deceased’s reincarnation, they overwhelmingly would look for shared physical characteristics (e.g. a birth mark) between the two, as well as shared memories, e.g. the reincarnation retaining a memory of an experience of the deceased. Dr. White then attempts to show that mental and physical continuity are actually intuitive cognitive processes that help us identify agents in the world, and so they, in turn, inform how we conceptualize reincarnation. She makes this case through a notion of theological incorrectness. The notion of theological incorrectness is a well-established tool in the cognitive science of religion literature which helps to differentiate intuitive (i.e. innate) cognitive processes from culturally learned beliefs. The idea is that when someone is asked to reason about a theological concept (what Dr. White in the interview calls a “reason task”), they are likely to use intuitive cognitive notions about the world even if those notions diverge from the indoctrinated theology that the person otherwise claims to believe. Appealing to the presence of theologically incorrect intuitions in individual reasoning about theological concepts shows that something other than just a cultural construct is operative in that reasoning, pointing to more fundamental cognitive structures.

The use of theological incorrectness as a criterion for the operation of an intuitive cognitive mechanism thus depends on the existence of a divergence between the reasoning of the participant and the formal theological reasoning of the tradition to which they belong. If there is no divergence, it is just as likely that the participant is reasoning from a culturally constructed concept as from some intuitive cognitive structure.

But, I don’t think Dr. White has shown that continuity of memory or physical traits as criteria for reincarnation does actually diverge from the theological system. In the case of Buddhism, she cites the Dalai Lama who is recognized as a reincarnation by remembering objects from his past life. She says this criteria is theologically incorrect from the perspective of the Buddhist doctrine of no-self. If the self is impermanent, how could someone carry a memory from one life to the next? The doctrine of no-self, however, does not just govern the transition between lifetimes. All Buddhist schools argue that a person changes from moment to moment, endlessly, and thus has no stable self. If memory continuity between lifetimes is problematic for the doctrine of no-self, then so is memory within one life, let alone between. However, there is no reason to think this is the case. The Buddhist doctrine of no-self is actually none too different than the cognitive science (CS) view of self. CS rejects the notion of a permanent homunculus pulling the strings inside the brain. The experience of a self is made of functioning neural components processing ever changing electro-chemical signals. This is sufficiently a no-self conception in the Buddhist sense. If CS can have a no-self view and explain memory, there is no reason to assume a priori that memory continuity is inconsistent with a Buddhist standpoint of no-self. In fact, I would argue, all Buddhist systems have thorough analyses about how memories are transferred between lives despite there being no-self. To say that memory transfer is theologically incorrect just demonstrates not being acquainted with the theology.

If neither of these concepts, physical or mental continuity, are theologically incorrect, it’s hard to make the case that they are borne out of some more fundamental agent-recognition cognitive structures. Because of the research design, I am even more suspect that the convergence Dr. White has shown is the result of a shared conceptual understanding of reincarnation rather than some intuitive structure. Dr. White said that she asked participants to reason about “reincarnation” without any religious language, so as not to prime their answers. “Reincarnation,” even in another guise, however, is already a religious concept, so I’m unclear how this isn’t already a sort of priming. Furthermore, there is good reason to think that each of the three studies she mentions are drawing on groups that have similar religious notions of “reincarnation.” The U.K. has had long cultural exchange with India, Jains themselves have conceptions of reincarnation drawn from an Upanishadic Indian milieu, and the American New Age draws largely on the Theosophists, who themselves also developed their religiosity out of this milieu. The convergence on continuity of memory and physical traits as criteria for reincarnation could be as much explained by a shared Indian notion of reincarnation than by some fundamental cognitive process. These studies do not demonstrate a true cross-cultural slice.

Lastly, Dr. White presents her upcoming research problem: why is it that upper class whites have adopted the notion of reincarnation but with a positive valence? She argues that in traditional reincarnationist doctrine, rebirth is to be escaped, not embraced. This question again shows an incomplete understanding of these traditions. In Buddhism, for example, it was only the very elite, probably a very small minority of monks, that were concerned with escaping rebirth. The vast majority of Buddhists are focused on what’s called the “lower scope,” attaining a better rebirth. The irony here is that White is trying to identify a cultural difference between American whites and traditional reincarnationist where there may actually be a shared cognitive structure, perhaps an intuition that the mind continues after death. Whereas earlier I argued that she is confusing cultural structures for cognitive ones, here she may be doing the reverse.

In sum, I think a lot of these problems could be rectified with a more thorough understanding of the theological positions about the phenomena under investigation. We cannot hope to identify theological incorrectness with an incomplete understanding of theology itself. Even if participants profess a different theology “on the ground” than the party line, investigating the relationship between the professed theology and its source requires a deep understanding of theology in general. Perhaps this demonstrates a good opportunity for collaborative research toward consilience. Just as the humanities can broaden understanding in their domain through the inclusion of cognitive science, the cognitive scientist has much to gain in collaborating with the religious studies scholar who has thoroughly investigated the doctrinal level of the phenomena under investigation.