The First Rule of Adjuncting is… 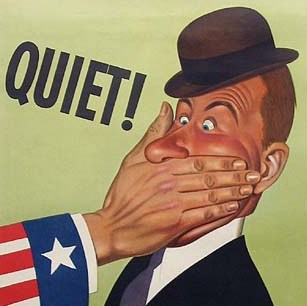 Kate Daley-Bailey received her A.B. (2001) and M.A. (2004) degrees in Religion from the University of Georgia. She has taught Religion courses at the collegiate level for the last ten years at Georgia State University, Georgia Perimeter College, and the University of Georgia. Daley-Bailey’s primary research interests are Religion, Literature, and the Arts, Theory and Methods, and Religion in Popular Culture. A regular contributor to the online magazine, Religion Nerd, she also, sporadically, writes posts for the Bulletin for the Study of Religion blog. Daley-Bailey recently presented her research on the construction of ‘human nature’ in world religion textbooks at the Annual meeting of the American Academy of Religion. As of this summer, she left adjunct teaching and has taken a full-time academic advisor position at the University of Georgia.

Kate Daley-Bailey received her A.B. (2001) and M.A. (2004) degrees in Religion from the University of Georgia. She has taught Religion courses at the collegiate level for the last ten years at Georgia State University, Georgia Perimeter College, and the University of Georgia. Daley-Bailey’s primary research interests are Religion, Literature, and the Arts, Theory and Methods, and Religion in Popular Culture. A regular contributor to the online magazine, Religion Nerd, she also, sporadically, writes posts for the Bulletin for the Study of Religion blog. Daley-Bailey recently presented her research on the construction of ‘human nature’ in world religion textbooks at the Annual meeting of the American Academy of Religion. As of this summer, she left adjunct teaching and has taken a full-time academic advisor position at the University of Georgia.

The First Rule of Adjuncting is…

The first rule of adjuncting is you don’t talk about adjuncting.[1]

The second rule of adjuncting is… you don’t talk about adjuncting!

If you have seen the film Fight Club, a visually stunning piece based on Chuck Palhnuik’s book by the same title which savagely critiques modern consumerism, you know that I am making a link here between this film and the role of the adjunct in American higher education. In the film, this underground fraternal club revolves around cage-fighting style matches between two men in abandoned warehouses. These brutal bouts act as therapy for these men who feel emasculated by modern consumer culture. What does that have to do with adjuncting? Nothing and everything.

If you have read my two pieces on the Bulletin for the Study of Religion blog, then you know I have recently come out of the closet as an adjunct. You may not know what an adjunct is. Here is a blurb where I explain the adjunct plight in higher education.

“An adjunct is a part-time knowledge worker who teaches 76% of all college courses in the US. We are contract workers (picking up jobs by the semester or year), transient populations (going where the jobs are), we rarely get benefits, are rarely hired in full-time capacity (because this would require we receive benefits), and we often don’t know if we will have work from semester to semester. Many of us have PhDs; some of us, like myself, only have a MA degree. Many of us have written for esteemed journals, published alongside tenured professors, and even written our own books.”

The closest equivalent in the U.K. is perhaps the fixed term temporary lecturer who primarily teaches. This is not to be confused with the more esteemed lecturer position which is more open-ended, fairly stable, and allows for both teaching and research. It seems there is a great deal of confusion regarding nomenclature even within similar systems. In the U.S., students and parents often have no idea how an adjunct (limited term, lowly paid, MA or PhD, instructor with few research opportunities) is different from other faculty… such as full professors (not limited term, well paid, PhD, who usually teaches and does research the rest of the time). Students only see what we do in the classroom… often they assume that those teaching their classes are not part of this underclass, if they even are aware such an underclass exists. Adjuncts don’t usually complain about their situation because they are already living month to month… and they can’t risk getting fired. This allows departments to pay them less and less. The tide is shifting though. Today, adjuncts are fighting for benefits, better wages, and representation in the university. In many small community colleges, adjuncts make up the majority of the faculty and work in less than ideal conditions (no benefits, low wage, no offices or shared offices, and no way to get out). In these cases, the 76% number rings true… where adjuncts teach a majority of the classes. In more prestigious state schools, like where I taught the last two years, about 17% are adjunct (this number is based only on part-time faculty). The count of annual contracted adjuncts is much harder to ascertain. I am sure you can imagine why, no college wants to advertise their use of this contingent labor. Some thinkers warn that the continued corporatization of the American academy is systematically undermining the values of higher education. Even Congress is worried.

So now that you know we exist and that you know that I was one (I taught 52 courses in 10 years at 3 different Georgia universities and colleges) I will explain why you might not have known that I was an adjunct.

Simple…I didn’t want you to know.

Why would I hide my identity as an adjunct? 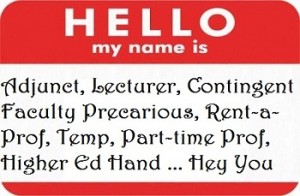 1. Fear: Speaking out makes your employers look bad. The first rule of adjuncting is that you don’t talk about adjuncting. The second rule of adjuncting is that you don’t talk about adjuncting! Why? Because if you talk about being underpaid, having no health insurance or benefits, no representation or recourse in administration, your department will be shamed by this disclosure (as they should be) and there will be retribution. I, like other adjuncts, who are disclosing what has happened to them, fear losing our current jobs and we fear that speaking up will make us social and professional pariah. We fear retribution. We also know that by disclosing this information we are burning bridges… I most certainly cannot ask for a letter of recommendation from a department which I have critiqued for unethical employment practices.

2. Shame: Speaking out makes you look bad. I never introduced myself as an adjunct because adjuncting is seen as the dying lands for academic stragglers. It is a job which slowly squeezes out the undesirables from academia. This is a way of culling the herd in the academic world. To say you are an adjunct is to risk being viewed in this negative light. If you are an adjunct, full-time professors want to know why you are an adjunct. They want to know what is wrong with you. If you are a perpetual adjunct, you must be damaged goods. Academia is a lot like high school… who you know, who you sit with, work with, present with… is indicative of your own academic status. Many academics only want to associate with other academics that can raise their scholarly stock. Associating with an adjunct might make your scholarly stock plummet.

So why would I speak out? Why say anything, if it is in my best interest to be silent?

It is no longer in my best interest to be silent. I tried that route and it didn’t work. I have decided to leave adjunct teaching. After all that work, I have finally had it. I had my Towanda moment. I like to call it my Breaking Bad moment… minus the whole becoming a homicidal drug lord part. Once I saw that my department was now hiring annual contracted ‘lecturers’ (PhDs who will teach full-time for up to seven years before a possibility of promotion to senior lecturers), I realized that now that departments could get PhDs to teach classes for pennies on the dollar, they would not need me. Oh they would continue to hire me on a part-time basis semester to semester when these lecturers leave two weeks before the semester starts for a better job. I would still not get benefits. I still wouldn’t be able to even cobble together a living by teaching, tutoring/ etc. at various state schools. I would still need to get a signed letter every single semester from my department so I could check out books from the school library. 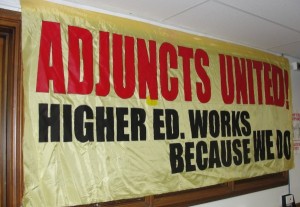 I may be leaving adjunct teaching for a living wage and benefits but I am not leaving academia. I love higher education but I can no longer pretend to be blind to the exploitation in my midst, to the exploitation happening to me. I love to teach, write, and research about religion but the cost of this part-time living is too high. I am personable, resilient, skilled, published, and highly educated… and now fully employed. Most adjuncts are so crippled, emotionally, finically, and physically… that by asking them to fight back you have only given them another job… another job for which they won’t be paid, a job which will likely get them fired and shunned.

I will still speak for adjuncts.

I am breaking the first rule and the second rule of adjuncting.

[1] *editors note: ‘Adjunct’ is a term used in America to denote a college professor who typically has the same and/or greater teaching responsibilities as a tenured professor at a university, but lacks anything even approaching the job security, benefits and stipend of a tenured professor. As Kate has mentioned, 76% of all college courses in the US are taught by adjuncts. Even many PhD’s are adjuncts. As the number of tenured teaching positions in academia continues to shrink, it is likely that most wishing to at least ‘earn a living wage’ will either have to find jobs outside academia altogether, or accept being a contingent laborer who not only teaches but has to compete with the very students they teach for jobs at a local pub for minimum wage – just to make ends meet. You should care about adjuncts for many reasons, but as tenure positions appear more like pipe dreams it’s likely that, if an academic career is your dream, you yourself may be in a similar position one day trying to make ends meet.