Many of my participants felt that familiarity with Christianity permitted them to be critical in a way that they could not with other religious traditions. This podcast coincides with Linda Woodhead’s recent Croall Lectures, aimed at interrogating the question: Is Britain still a Christian country? Drawing on her own qualitative research and recent surveys in the UK, 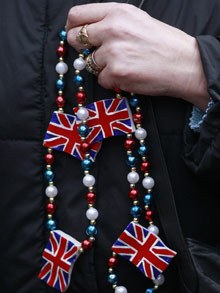 Katie Aston is Associate Lecturer in the Anthropology of Religion and Ethnographies of South Asia at Goldsmiths University. She recently submitted her PhD on the topic of nonreligious and secular material cultures and ritual in the UK. Aston is also Postgraduate and Early Careers Liaison Officer for the Sociology of Religion (Socrel) research group, as part of the British Sociological Association in the UK (BSA). She is also Editor for the Nonreligion and Secularities Research Network [NSRN] blog. Her research interests span material culture, art, cartoons, secularism, atheism, humanism and ritual practices, within the disciplines of Sociology, Cultural Studies and Anthropology.

Katie Aston is Associate Lecturer in the Anthropology of Religion and Ethnographies of South Asia at Goldsmiths University. She recently submitted her PhD on the topic of nonreligious and secular material cultures and ritual in the UK. Aston is also Postgraduate and Early Careers Liaison Officer for the Sociology of Religion (Socrel) research group, as part of the British Sociological Association in the UK (BSA). She is also Editor for the Nonreligion and Secularities Research Network [NSRN] blog. Her research interests span material culture, art, cartoons, secularism, atheism, humanism and ritual practices, within the disciplines of Sociology, Cultural Studies and Anthropology.

This podcast coincides with Linda Woodhead’s recent Croall Lectures, aimed at interrogating the question: Is Britain still a Christian country? Drawing on her own qualitative research and recent surveys in the UK, and from the nearly 80 projects funded by the Religion and Society programme, Woodhead is extremely well placed to examine this broad, nicely impossible question. I decided in the end to do two things, first to give a summary of some of the key points and second, to stick with what I know of this topic – drawing on my own research with (secular) humanists, based in the UK.

There has been much debate generated about the Christian status in Britain, not least following the comments of David Cameron in 2014 – who stated that Britain was a Christian country. Cameron had made his comments in a letter published in the Church Times on 16th April 2014[1] and his target audience should be borne in mind. He wrote:

I believe we should be more confident about our status as a Christian country, more ambitious about expanding the role of faith-based organisations, and, frankly, more evangelical about a faith that compels us to get out there and make a difference to people’s lives (Cameron, 2014).

Here (as elsewhere) Cameron emphasises that such a confidence in Christianity will help people get out there and do something. He also emphasises that: “Christian values of responsibility, hard work, charity, compassion, humility, and love are shared by people of every faith and none” (ibid.).

In this podcast, Linda Woodhead takes up this debate from a sociological perspective, drawing on her experience as the overseer of the AHRC/ESRC funded Religion and Society programme which commissioned 75 UK based research projects over a five year period (2007-2012). In response to the question ‘Is Britain a Christian country?’, Woodhead’s response is a qualified ‘yes’. This means, Britain is not Christian in every way; numbers of people attending Church are certainly falling as are the number of people who self-identify as Christian[2]. She also states that Britain will certainly not be Christian forever if current trends continue, and, further, argues that Britain is not straightforwardly secular and a rise in ‘nones’ (those ticking ‘no religion’ on the Census) does not equal a rise in atheist or new atheist discourse. Many people continue to believe in a God (although not necessarily the Trinity) or consider themselves ‘spiritual’. But, in sum she argues that: “the Bible has helped to give Britain a set of values and morals which make Britain what it is today.”

Over the last four years, I have been working on an ethnography of nonreligious[3] groups and individuals in the UK. I was resident archivist and volunteer for the Rationalist Association (publishers of the New Humanist magazine), and through these activities I was able to meet many, many nonreligious individuals. I also interviewed and observed humanist celebrants in action across the UK and met couple’s marrying in humanist ceremonies. Woodhead points out in this interview, the ‘nones’ (those who ticked no religion on the census) are a broad category, who do not easily conform to atheism per se nor should they be understood as self-identifying Christians.

My own research confirms, as Woodhead suggests, that the ‘none’ category is in no way monolithic nor should it be equated with ‘atheism’ per se. I rarely met people who wholeheartedly sympathised with new atheists or who were hardline secularists. In the course of my work it also become clear that many situate their nonreligious identity in relation to a Christian heritage, either as a result of personal experience or of education. This familiarity emerged in a number of ways. One such example is in regards to religious criticism; many of my participants felt that familiarity with Christianity permitted them to be critical in a way that they could not with other religious traditions. In an interview with Peter, a 28 year old writer and doctoral student, we came onto the topic of the Danish Cartoons in which he made the following comments:

‘[W]ell I think it was more, Christianity I [am] up for taking the piss out of, because I always take the perspective that, and I’ve heard comedians point this out, Stewart Lee and Dara Ó Briain, Christianity’s kind of ours to take the piss out of. I went to church, I got dragged to the Church of England every Sunday, so we get, so I could get into the right school, whereas I’ve always felt that something like Islam [for example] is tied into racial minorities [and is thus off limits].’ [London, April, 2013]

I was particularly interested in the explicit reference to the Church of England in relation to “other religions.” This certainly raises a number of questions for me. Does Cameron mean all denominations of Christianity? Or just Anglicanism? Moreover, what does it really mean to state that we are Christian anyhow? Woodhead illuminates some of these points more clearly – that it is in institutions and in a sense of ‘cultural Christianity’.

Certainly, by self-identifying with Christianity, Peter situates himself very clearly inside both nonreligious and Christian groups, at least nominally. Abby Day brings some qualitative description to the category of ‘Christianity’ in her research ‘Believing in Belonging’ (2006). The non-faithful are categorised by Day as ‘nominalist’; that is, ethnic, natal and aspirational. This group are: ‘not merely unchurched and neither are they indifferent to Christianity: it functions to reinforce familial, ethnic and social connections.’ (2006: 126). Day’s work is useful in demonstrating how despite being anti-religious or not-religious, Christianity can continue to provide a reference point. The choice to call oneself ‘Christian’ whilst not ‘practicing’ can be understood as ‘cultural’ Christianity (Demerath, 2000: 127) or a quasi-ethnic category (Voas and Bruce, 2004; Voas and Day, 2007: 3). Yet despite familiarity my own participants do not personally identify as Christian and, as Woodhead points out, there should be caution used in labelling anyone ‘Christian’ who does not do so for themselves. Thus, I am not suggesting that my participants are ‘nominally’ Christian, simply that their attitude to religions was inflected by their experiences of it.

What such examples demonstrate is a negotiation of this term ‘Christianity’. Whilst many of my participants were aware of their own ‘habitual Christianity’, they were also at pains to break the habit[4].

I would be very interested to hear of other research addressing these issues. My own research – as I state – was within smaller scale populations and other researchers will be able to illuminate these debates at the macro-level, more clearly than I can. What I will state in summary is that central to this question – ‘Is Britain is a Christian country?’ – is a tension between issues of privilege and privatisation. Moreover, the debate rests on that tricky dichotomy between religious institution (and power) and people’s personal religious experiences and identities. As Woodhead stated in her article ‘How Religious Identity has Changed’ [in the UK]: ‘for a majority today, being religious is just a part of life and identity, not what defines them’ (2013). To say that Britain is a Christian country, as per Cameron’s speech, is therefore problematic not so much because the historical and (fragmented) contemporary trends it speaks to are contestable. It is problematic because it is totalising. Further, as Day points out, people who are otherwise ‘not religious’ state that they are Christian and give reasons of upbringing, culture or national identity. On a micro scale, this might resonate, and many, including my own nonreligious, secular participants may share this sense of ‘cultural Christianity’. However, despite any protestations from the PM, when a politician makes such a statement, there is a magnification of natal, national and cultural themes, and it is perhaps understandable that this creates anxieties about the political agenda implied by such bold statements – whether real or otherwise.

DAY, A. (2006). Believing in Belonging: a Case Study from Yorkshire. Unpublished PhD

DAY, A. (2011). Believing in belonging: Belief and social identity in the modern world. Oxford University Press.

ENGELKE, M. (2012) ‘In Spite of Christianity: humanism and its others in contemporary Britain’ Talk given at the NSRN annual conference.

WOODHEAD, L. (2012) ‘How Religious Identity has Changed’ published on Pandemonium.

[1] This follows remarks from other conservative MPs, including Baroness Warsi, who argued in 2011 that Britain should become more Christian.

[3] Non religion is understood as different to the ‘secular’ and defined as defined as: ‘any position, perspective or practice which is primarily defined by, or in relation to, religion, but which is nevertheless considered to be other than religious (Lee, 2011).

[4] In my forthcoming thesis, I discuss the great length humanists and other nonreligious people went to, negotiating the boundaries between what is ‘culturally’ Christian and what was not (see also Engelke, 2014); the equation of moral values and Christianity was a particular sticking point. More space would also have allowed me to comment on the British Humanist Association’s Census campaign and letter to the Prime Minister, both relevant to this topic.