Epistemological Sacrifice Zones and the Decolonization of Religion

Decolonization requires changing the politics of academia's knowledge production, argues Tyler M. Tully in this response to Episode 337: Decolonizing the Study of Religion with Malory Nye. 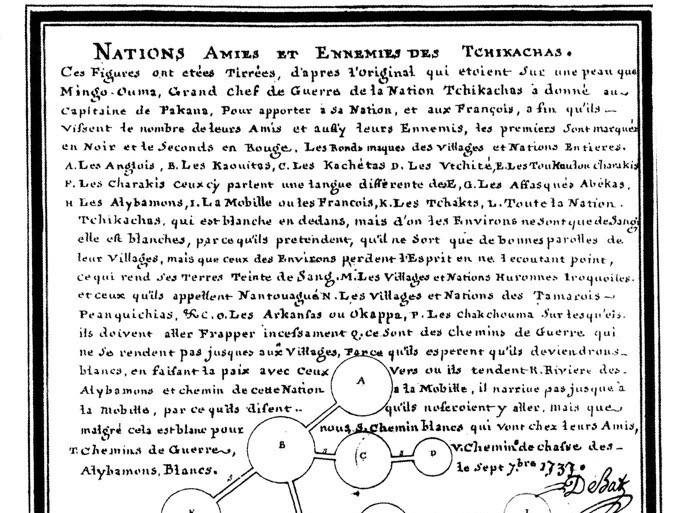 Tyler M. Tully is a doctoral candidate in Religion and the Arthur Peacocke Graduate Scholar in Science and Theology at Exeter College, Oxford, whose teaching and research engages intersecting entanglements between liberal-humanism and U.S. settler-colonialism, Indigenous and Feminist materialisms, critical race, affect and political ecology.

Tyler M. Tully is a doctoral candidate in Religion and the Arthur Peacocke Graduate Scholar in Science and Theology at Exeter College, Oxford, whose teaching and research engages intersecting entanglements between liberal-humanism and U.S. settler-colonialism, Indigenous and Feminist materialisms, critical race, affect and political ecology.

Epistemological Sacrifice Zones and the Decolonization of Religion

Epistemological Sacrifice Zones and the Decolonization of Religion by Tyler M. Tully

A response to Episode 337: “Decolonizing the Study of Religion” with Malory Nye by Christopher R. Cotter

The invitation to decolonize the academic study of religion that Malory Nye extends in his interview with Chris Cotter is both necessary and complex in that it asks us to acknowledge the field’s formation in, as, and through implementations of colonial power—which, as the most recent round of Black Lives Matter protests is at pains to teach us, is also about the implementation of race/ist power. Nye’s response further asks us to account for how these colonial attachments materialize going forward. 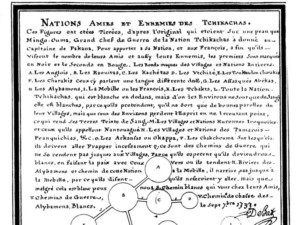 Like their Choctaw and Creek neighbors to the south, the Chickasaws understood themselves as being birthed out from the sacred maternal navel of Nanih Waiya, a Mississippian era mound with a platform enclosure spanning one square mile in what is now central Mississippi. The sun circle motif at the center of this 1737 map represents the central council fire of the Chickasaw Nation and reflects how they saw themselves in relation to the sun and thus also the divine spirit. While the circles on the periphery loosely reflect the Chickasaw’s neighbors, their function portrays levels of social association (such as trade, kinship ties, alliances, etc.) rather than physical proximity.

I am grateful to Nye for his example in facilitating these collaborative conversations, and I appreciate his admonition that this is less about improving the discipline than it is about taking responsibility for it. Rather than reaching an end goal or point of arrival, Nye wants religionists to consider what this “legacy means” and asks “how this discipline can become more critically aware of its past and more rigorously able to define itself beyond the structures of power and exploitation that gave rise to it” (Nye 2019a, 8-9). Ostensible responses to these questions would incorporate critical analyses of a field still largely organized around colonial cartographies, whose research projects, assumptions, and norms continue to ennoble Eurowestern, or white supremacy.

Following critical race and Indigenous studies scholars Eve Tuck (Unangax^/ Aleut) and K. Wayne Yang who remind us that “decolonization is not a metaphor” (Tuck & Yang 2012), Nye affirms that decolonization is “a matter of life and death” for peoples still living under colonial projects and not merely colonial legacies (Byrd & Rothberg 2011). Interpreting Tuck and Yang to mean decolonization in the “political, social, and legal” sense, however, Nye differentiates the former against what he sees as decolonizing knowledge and education systems (Nye 2019a, 8). While Nye concedes that this inevitably involves some degree of overlap with the political sphere, he sees the two as somewhat separate and focuses attention on decolonizing religion. Given this emphasis on epistemologies, Nye’s invitation to co-think our material and discursive attachments to what bell hooks famously described as “capitalist imperialist white supremacist (cis-hetero)patriarchy” is not unlike similar discussions occurring elsewhere in the academy (hooks 1992).

What these discussions suggest is that colonialism—as constitutive of modernity, and indeed as a producer of the modern world system—sacrifices not just Indigenous peoples, but also (and coterminously) their geographies of knowledge, or what I’m calling epistemological sacrifice zones. If epistemological sacrifice zones are Native peoples and their traditional knowledges and irreducible kinship relations rooted in place (Aikenhead et al 2007; Corntassell et al 2014; Simpson 2014; Watts 2013) that are involuntarily immolated for the benefit of Eurowestern knowledge production as I am arguing, then they are not unlike what environmental humanities scholar Rob Nixon refers to as “unimagined communities” (Nixon 2010). But where Nixon means “communities whose vigorously unimagined condition became indispensable to the maintenance of a highly selective discourse of national development,” I want to instead center these communities on their own terms and thus avoid what Chickasaw decolonial thinker Jodi Byrd calls confusing an “effect for a cause” (Byrd 2014).

Epistemological sacrifice zones are made hyper-visible during an apocalypse—whether that crisis is the ongoing genocide of Black and Indigenous peoples, or the state response to the novel coronavirus, which are attain the same ends. As crises cohere over intervals of time, they illuminate epistemic landscapes while intensifying disparities of power. COVID-19, for example, enlarges existing inequities, such as the domestic labor of home-schooling children, the gendered dimensions of knowledge production in higher ed, or the ‘digital divide’ between white/non-white, urban/rural, wealthy/poor populations—depending on which “ethico-onto-epistemological” cuts one makes (Barad 2007).

However, not all crises are commensurable, and those spanning over longer periods of time and space are often more difficult to perceive for those not negatively affected by them. In this way, it can be helpful to think of colonialism, not as an event confined to the past, but rather a transmutative set of civilizing projects whose “logics of elimination” and replacement remain largely invisible to white settler-colonial peoples (Wolfe 2006).

But ongoing dynamics like these are always hyper-real for Natives and descendants of enslaved Africans in what is currently called the United States of America. A recently published exposé in High Country News, for example, reveals how the U. S. government deceived and coerced approximately 250 tribes to seize 11,000,000 acres of land in the making of America’s public universities. These institutions of higher education, some of which were built by enslaved people, also maintain campus police forces with longstanding histories of racialized terror against Black and Indigenous students. Because the Morrill Land-Grant Act, which established these institutions requires the tracking of monies raised from university lands in perpetuity, researchers have been able to calculate their exact value at almost $500,000,000 when adjusting for inflation. The enormity of wealth stolen from these still extant tribes—the amount of which does not include endowment interest, building and land improvements, athletics income, or returns on intellectual property generation—seems especially poignant given the significant disparities in spending and funding exposed by COVID-19, which overwhelmingly affects Native and Black populations in disproportionate ways, to say nothing of university reparations owed to Black students and faculty also.

If colonialism’s projects are context-specific (even as its reach remains global), then white North American scholars must be especially vigilant in discussions around decolonizing education systems given the irreducible entanglements between Native dispossession and university infrastructures built by enslaved Africans. Like Black peoples whose lives are circumscribed by the afterlife of slavery (Sharpe 2016), Native peoples also still exist in spite of colonialism and its afterlives. The genocide of Natives and the ongoing theft of their lands and resources combined with the hyper-visible onslaught of police brutality against Black Americans (matters of “life and death”) work to unsettle settler-colonial divisions between the socio-political and the epistemic.

In exposing these disparities and terrestrial defalcations as they affect the original peoples of Turtle Island and the descendants of enslaved Africans (who have continually experienced successive waves of crises since European invasion), I hope to lift up exactly what’s at stake in discussions around the material and epistemological invocations of decolonization—which in the end are coterminous for colonized people still living in North America. These crises involve land and they involve persons, but they also involve politics of knowledge production that make religious studies—and the humanities—possible.

While Mignolo et al’s collective on Modernity/Coloniality remains perhaps the most popular iteration of “decolonial theory” in academe, decolonial discourse as it relates to knowledge involves a much larger set of conversations in the Americas, Africa, and the Caribbean, where Indigenous and Black peoples unlink from the hegemonic values, disciplines, and methods of Eurowestern knowledge production (Wynter 1994; Diop 1974; Sefa Dei 2019; Grosfoguel 2011; Mbembe 2015). Decoloniality can thus be seen as an intentional movement away from race/ist colonial hegemony via the processes of epistemic disobedience, reclamation, and reconstitution—not reform. Bolivian feminist and Indigenous activist Silvia Rivera Cusicanqui, for example, describes decoloniality as form “sweeping counterhegemonic strategies” that draw their inspiration from the past towards new Indigenous futurities (2012, 95-96). As Cusicanqui and many others point out (Cheah 2006; Pappas 2017; Noxolo 2017; Esson et al 2017), adopting decolonial theory as a fashionable methodology “without altering anything of the relations of force in the ‘palaces’ of empire” reproduces the same racialized coloniality it seeks to undo (Cusicanqui, 98).

Nye agrees that decolonizing religion means much more than merely expanding one’s reading list. He wants us to employ practical ways of relating religion’s role in the formation of colonial knowledge-complexes and to account for the discipline’s contrapuntal relations with race and racialization (Nye 2019). Multiple iterations of decolonial theory stress that knowledge generation is never non-political or value-neutral. If scholars are serious about decolonizing religious studies—and I hope we do take Nye’s invitation seriously—then this would at least mean taking responsibility for how universities not only traffic in but depend upon ongoing violence against Black and Native bodies of knowledge.

Mbembe, A. (2015). Decolonizing knowledge and the question of the archive. Lecture. May 2, 2015 at the Wits Institute for Social and Economic Research.