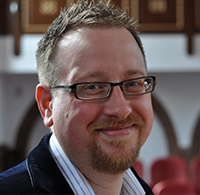 Stephen Gregg is Senior Lecturer in Religious Studies at the University of Wolverhampton, and the Hon. Secretary of the British Association for the Study of Religions. His background is in nineteenth-century Hindu philosophy, but in recent years he has specialised in minority religious movements, publically-projected religious identity, and method and theory in the Study of Religion. He teaches a wide range of religious traditions to undergraduates, and has always had an interest in student fieldwork pedagogies. Recent and forthcoming books include Jesus Beyond Christianity (Oxford University Press, 2010) with Greg Barker, Engaging with Living Religion (Routledge, 2015) with Lynne Scholefield, A Universal Advaita: Swami Vivekananda and Non-Hindu Traditions(Routledge, 2019), and The Bloomsbury Handbook on Studying Christians (Bloomsbury, 2019) and The Insider/Outsider Debate: New Approaches in the Study of Religion (Equinox, 2019) both with George D. Chryssides. Recent chapters and articles include work on Scientology, The International Raelian Movement, Apostasy in New Religious Movements, and fieldwork methodologies for NRM researchers.

He is currently working on transgressive and troubling religious actions and conceptions of religious belonging.

Cults and NRMs: An RSP Remix, Part I

Tune in for Part I of our RSP Remix episodes on Cults and New Religious Movements!

It’s that time of year again where the RSP continues to combat the Christian-hegemony by bringing you an as-yet-undefined festive special! Hosted by Jonathan Tuckett and supported by (the invisible) Sammy Bishop, this year we play The Deadline, a quiz in which four aspiring academics must avoid their supervisor, quiz-master and champion of champions Carole Cusack, by answering some fiendishly difficult questions. If at any point though, Carole gets more answers correct than they do they will be eliminated from the game (and possibly asked to leave academia).

New Directions in the Study of Scientology

Scientology seems almost exclusively to be considered fair game (pun intended) for ridicule and criticism among New Religious Movements, and this may have much to tell us about the theoretical models scholars are using, and the institutional factors at play in the legitimisation of particular traditions in the academic and popular discourse. We discuss insider scholarship and the control of information; the Free Zone and the Church; strategic use of the category 'religion'; and how we see scholarship developing in the post-Hubbard era

Here are some traditions that make this time of the year special. End-of-year listicles, the "War on Christmas" debate, animations of elves dancing with your family's heads pasted on... and of course, the RSP "Christmas" Special!