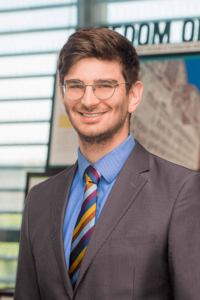 Benjamin P. Marcus is the Religious Literacy Specialist with the Religious Freedom Center of the Freedom Forum Institute, where he examines the intersection of education, religious literacy, and identity formation in the United States.

He has developed religious literacy programs for public schools, universities, businesses, U.S. government organizations, and private foundations, and he has delivered presentations on religion at universities and nonprofits in the U.S. and abroad. He has worked closely with the U.S. State Department, Interfaith Youth Core, the Foundation for Religious Literacy, and the Cambridge Inter-Faith Programme in the United Kingdom.

In February 2018, Marcus was accepted as a Fulbright Specialist for a period of three years. As a Specialist, he will share his expertise on religion and education with select host institutions abroad.

Marcus chaired the writing group for the Religious Studies Companion Document to the C3 Framework, a nationally recognized set of guidelines used by state and school district curriculum experts for social studies standards and curriculum development. He is a contributing author in the Oxford Handbook on Religion and American Education, where he writes about the importance of religious literacy education. In 2015 he served as executive editor of the White Paper of the Sub-Working Group on Religion and Conflict Mitigation of the State Department’s Religion and Foreign Policy Working Group.

Authorities and the Past | Discourse! June 2022 (with video)

Amid mass protests against police brutality and systemic racism ongoing in the United States, RSP contributor Ben Marcus speaks with Andre Willis and Carleigh Beriont about race and religion in this month's Discourse episode.

Separating Religion and Government...But What Is Religion?: A Look at the US Supreme Court

Americans generally affirm the importance of separating "church" and "state." But what does church--or religion--mean? Hear two leading religious freedom lawyers discuss the meaning of religious freedom in key #SCOTUS cases, including one before the Court this term.

When Islam Is Not a Religion

Asma Uddin is the author of When Islam Is Not a Religion: Inside America's Fight for Religious Freedom. In this book, Uddin examines an alarming trend to redefine Islam as a political ideology, not a religion. In our conversation, we track the history of this movement to redefine Islam and its implications for the rights of Muslims. We discuss the widespread presumption among American progressives that courts tend to protect religious freedom for Christians, but not for Muslims, and we examine particular stories that support and problematize that narrative. In particular, Uddin provides vivid examples of how American courts have reacted to arguments that Islam is not a religion.

The religious landscape of the United States is changing dramatically. Americans must consider what it means to govern a nation of religious minorities. We interview Dr. Robert P. Jones, the founding CEO of the Public Religion Research Institute. Jones discusses findings from PRRI's national surveys on religion and public life, many of which are represented in the American Values Atlas. The data collected by PRRI reveal a number of surprising trends related to religion and its intersection with politics, voting patterns, age, race, immigration, and secularism in the United States. A few key findings highlighted in PRRI's 2016 report on America's changing religious identity and covered in this podcast: (1) white Christians now account for fewer than half of the public, (2) white evangelical Protestants are in decline, (3) non-Christian religious groups are growing, and (4) atheists and agnostics account for a minority of all religiously unaffiliated. We discuss the implications of these findings and more, and we briefly review the research methodologies utilized by PRRI.

In this podcast, we speak with Dr. Katayoun Kishi, who oversaw the ninth in a series of reports by Pew Research Center analyzing the extent to which governments and societies around the world impinge on religious beliefs and practices. We discuss the findings of the report as well as methodology for collecting and analyzing data. Dr. Kishi summarizes findings for different regions of the world--including the Americas, Europe, and the Middle East and North Africa--and she explains long-term trends evident from Pew's reports.