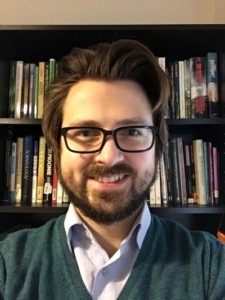 Aled J. Ll. Thomas is a PhD candidate at the Open University, UK. His thesis focuses upon the auditing process of Scientology, the transition it has made from psychiatric therapy to religious praxis, and its nuanced nature in contemporary Scientologies. He holds an MA in the Study of Religions: Religious Experience at the University of Wales: Trinity Saint David, during which he researched non-Scientologist perceptions and media representations of L. Ron Hubbard’s auditing technology, in addition to presentations of Western and Eastern religious experiences in popular culture. Aled has delivered papers on his research at several conferences in the UK and Belgium, including ‘”The End of the World is at Hand!” Religious Experience and Mental Illness in The Adventures of Tintin’ and ‘Scientology Beyond the Church: The Practice of Auditing in the Free Zone’.

Current projects include a forthcoming chapter, ‘Scientology Inside Out: Religious Belonging in the Free Zone’ (with Stephen E. Gregg), for ‘The Insider/Outsider Debate: New Perspectives in the Study of Religion’ (edited by George D. Chryssides and Stephen E. Gregg).

BASR 2019: The State of the Discipline

Vivian Asimos and Theodora Wildcroft took the opportunity to ask the delegates of BASR 2019 what inspired them about the conference theme, their opinion about major trends in the discipline, and how they were personally feeling about REF 2021.

New Directions in the Study of Scientology

Scientology seems almost exclusively to be considered fair game (pun intended) for ridicule and criticism among New Religious Movements, and this may have much to tell us about the theoretical models scholars are using, and the institutional factors at play in the legitimisation of particular traditions in the academic and popular discourse. We discuss insider scholarship and the control of information; the Free Zone and the Church; strategic use of the category 'religion'; and how we see scholarship developing in the post-Hubbard era

In his interview with the RSP, George Chryssides considers a prominent methodological challenge for scholars of New Religious Movements (NRMs) – how to approach the narratives of former members of NRMs in an academic context. Ex-member narratives can cover a variety of issues relating to NRMs, ranging from reasons why certain members joined and left the movement, to intricate details involving esoteric practices that are unknown to outsiders.

ISKCON And When New Religions Aren't So New Anymore

Kim Knott provides an overview of the Hare Krishna movement in Britain, which celebrates its 50th anniversary this year.