What is Right With Pagan Studies?

For all our talk of religion being a human endeavor, we are unaccountably unaccustomed to thinking of it as one; we treat it as an abstract phenomenon that can be subjected to a passably “objective” study, like thermodynamics or photosynthesis.Ethan Doyle White’s interview with the RSP is a fascinating follow-on to While Taira seeks a new paradigm of religious studies that does not require definition of “religion,” ... 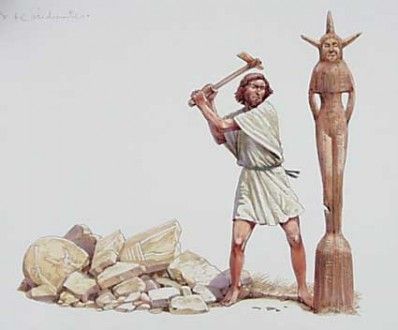 What is Right With Pagan Studies?

Ethan Doyle White’s interview with the RSP is a fascinating follow-on to Teemu Taira’s. While Taira seeks a new paradigm of religious studies that does not require definition of “religion,” White has repeatedly expressed frustration with the inability of Pagan studies to define “Paganism,” writing that the “problem with Pagan Studies hinges on its inability to coherently explain precisely what ‘contemporary Paganism’ is. The field of Pagan Studies has gone on for two decades, all the while managing to circumnavigate this contentious issue, but I do not believe that it can do so indefinitely, considering the great importance this question has for the very existence of the field” (2012). How is it that the future of religious studies hinges on ceasing to define “religion,” while the future of Pagan studies hangs on starting to define “Paganism?”

It is tempting to say that this curious contradiction has arisen because Pagan studies is disproportionately staffed by practicing Pagans (Davidsen, 194–5) who would benefit tremendously from a definition, since constructing the object of their study—which causes so much anxiety in religious studies—is precisely their objective. This is the concern that prompted Markus Altena Davidsen (2012) to call for stricter efforts to corral Pagan studies back into methodological line with religious studies.

I applauded White’s response to Davidsen for taking what he describes in the interview as a “balanced, mixed view,” recognizing the validity of dual insider/outsider status in anthropological methodology and noting that “there are independent [openly Pagan] scholars … who have written excellent, balanced historical and biographical accounts… To derogatorily label them ‘religionists’ and accuse them of being too favorable to Paganism, as the Davidsen approach would lead us to do, would be doing scholarship a real disservice” (2012). I think White is absolutely right, but stops too short, for when he writes that he “cannot accept … the accusation that those who adhere to a particular religious belief are intrinsically unable to analyse that belief critically,” (ibid.) he, in a certain measure, reinforces Davidsen’s basic claim that the only valid approach to the study of a religion is a detached critical naturalism. In short, his response to Davidsen is to affirm that religious practitioners can be objective, too.

It is this notion of detached, naturalistic criticism that needs to be criticized, however. I would pay good money to see Davidsen walk into a women’s studies department and declare that its work can only be carried out by men, because women bring too many “insider concerns and perspectives,” or inform a queer studies faculty that queer instructors should be replaced by straight ones, because it is academically unseemly to have them “actively promoting the sexual orientations in question.” I would pay an equal sum, however, to see White defend the same departments on the grounds that they can certainly set aside their identities and, as it were, pretend to be straight cis people long enough to do “balanced” scholarship.

If this strikes us as a ridiculous example, that is because no other field in the humanities is held to the same requirements of detached objectivity demanded in religious studies. No one raises an eyebrow when an accomplished painter teaches art history, or even when a former head of state assumes a post in political science. Far from a compromise of objectivity, this is seen as a valuable leveraging of applied expertise. For all our talk of religion being a human endeavor, we are unaccountably unaccustomed to thinking of it as one; we treat it as an abstract phenomenon that can be subjected to a passably “objective” study, like thermodynamics or photosynthesis. Human endeavors, however, are humanistic—to be elaborated as practices rather than dissected as occurrences. The attempt to engage religious studies as a science ends Davidsen up in the absurd position of objecting to appointing recognized experts as teachers—as though being a successful novelist might compromise one’s integrity as an English professor (although we might be equally leery of letting them drone on about their own work).

Recognizing this absurdity, White refuses to see the “religionists” drummed out, but remains sympathetic to Davidsen’s broader concerns about Pagan worldview creeping into academic description. I find this concern misplaced, however, because the purity of observation and description to which an “insider” account is contrasted has only ever been a faux objectivity. Colonialist scholars took as their standard what most educated Europeans believed, and then proceeded to judge “primitive religions” against Christianity. Can we honestly claim to be different when Davidsen, in the very opening of his critique (p. 183) asks “how we might do better in promoting a naturalist and theoretically oriented approach to studying religion?” Once again, our field is simply using the majority belief of educated Europeans, which is now naturalism, as the obvious yardstick of human judgement. If anyone doubts this, let him once watch the faces of a conference audience when a presenter says that his work in religion builds on Gramsci, and then when another says that her work builds on Guénon.

Pagans often, as White notes in the interview, claim continuities with ancient peoples and kinship with indigenous ones. Perhaps the most credible of these claims is to a worldview that rejects the separation of the sacred and the secular. To insist upon that separation by disallowing methodologies and epistemologies rooted in religious belief, either in the very strong terms of Davidsen or in the much softer terms of White, is, in practice, a colonialist imposition, which, when carried out in a key space of Paganism’s own self-definition (as Pagan studies has de facto become), amounts to an erasure of identity. When White says that we “need to stop accepting Pagan ideas of what Paganism actually is, because they are often idealized and not always analytically useful to those of us who are scholars,” I cannot help but hear an echo of the old assertions that we need to stop accepting, say, Indian ideas of what Indian religion is, because we have the true model of religiosity. For all our pretensions otherwise, we still have an orthodoxy made up of educated European beliefs that invalidates its opponents by depriving them of the terms to name themselves or to articulate their own experience.

Maybe Pagan Studies isn’t infiltrated by religionists, like Davidsen alleges, or overburdened with theological elements that need to be “shaken off,” as White suggests, but instead maybe our whole academic enterprise in the study of religion is, as Russell McCutcheon recently suggested, too big a tent, as the domination of our schools of theology by the Abrahamic religions forces a growing non-Abrahamic theological scholarship to seek refuge in secular departments not designed to accommodate it. The peculiarities of Pagan studies, then, might call our attention to the need of a department to house the emerging discipline of trans-religious theology—a department that could perform the functions of a school of theology ecumenically, providing discursive space for a passionate elaboration of religion as a human endeavor, instead of trying to dispassionately dissect it as a social phenomenon. There the “religionists” would be kept at a distance that Davidsen may find acceptable, their work clearly demarcated from that of the naturalistic, social scientific scholarship that he believes to be the only path forward. White, however, would still be able to find just down the hall those “religionist” scholars whose contributions he values for bringing into the academy the experiences of those who have lived what he aims to study (this is the “deep pluralism” called for by Ezzy [2015]). Pagan scholars, for their part, would have discursive space to continue their work of self-representation and theological exploration, which Panin (2015) suggests might be an unavoidable development out of Pagan studies anyway and, in the same stroke, we would open our theological discussion not just to Pagans, but also to Hindus, Buddhists, and many others who have been marginalized in the Abrahamic spaces in which theology has been academically acceptable hitherto, enriching religious studies by deepening and broadening its most important academic partner in dialogue.

Panin, Stanislav. “Discussions on Pagan Theology in the Academia and in the Pagan Community,” Mediterranean Journal of Social Sciences 6.3 (2015).