77th Annual Meeting of the Association for the Sociology of Religion (ASR), 20-22 August 2015, in Chicago, Illinois. Conference report for The Religious Studies Project by Amanda Schutz, PhD student in the School of Sociology, University of Arizona. The theme of this year’s annual ASR meeting was a familiar one among social science conferences: understanding change. In her presidential address, “Complex Religion: 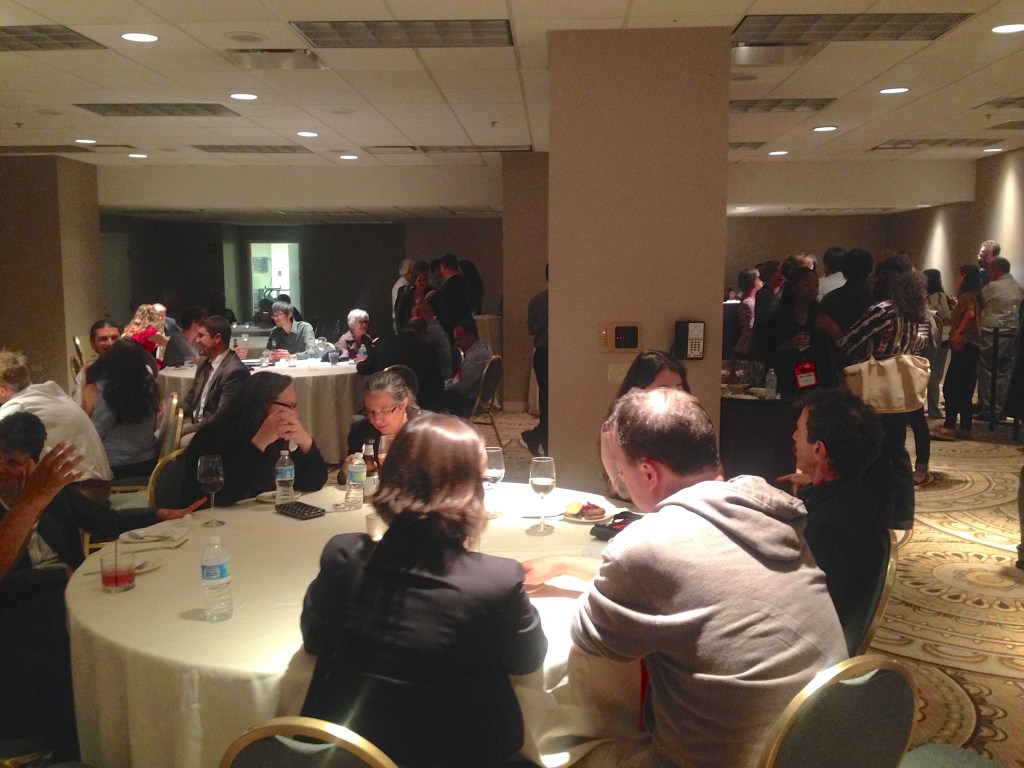 Amanda is a PhD candidate in sociology at the University of Arizona. Her research is motivated by interests in identity, deviance, social movements, and organizations. Her dissertation focuses on nonbelievers' involvement in nonreligious organizations, the variation among such organizations, and the benefits they provide their members. Amanda is also an assistant editor of the Nonreligion and Secularity Research Network's blog (http://nsrn.net), Nonreligion & Secularity (http://blog.nsrn.net). To learn more about Amanda, visit her webpage at the UA School of Sociology (http://sociology.arizona.edu/user/amanda-schutz) or contact her by email: amschutz@email.arizona.edu.

Amanda is a PhD candidate in sociology at the University of Arizona. Her research is motivated by interests in identity, deviance, social movements, and organizations. Her dissertation focuses on nonbelievers' involvement in nonreligious organizations, the variation among such organizations, and the benefits they provide their members. Amanda is also an assistant editor of the Nonreligion and Secularity Research Network's blog (http://nsrn.net), Nonreligion & Secularity (http://blog.nsrn.net). To learn more about Amanda, visit her webpage at the UA School of Sociology (http://sociology.arizona.edu/user/amanda-schutz) or contact her by email: amschutz@email.arizona.edu.

77th Annual Meeting of the Association for the Sociology of Religion (ASR), 20-22 August 2015, in Chicago, Illinois. Conference report for The Religious Studies Project by Amanda Schutz, PhD student in the School of Sociology, University of Arizona.

The theme of this year’s annual ASR meeting was a familiar one among social science conferences: understanding change. In her presidential address, “Complex Religion: Interrogating Assumptions of Independence in the Study of Religion,” ASR president Melissa Wilde urged sociologists to consider religion a variable of paramount importance, alongside commonly examined ones like race, class, and gender. She stressed that religion remains one of society’s most significant “self-sorting mechanisms” and marveled at its persistent relevance in helping us make sense of the social world. Wilde admitted she chose the theme “Understanding Religious Change” early on in her tenure as ASR president; but as the conference drew nearer, she became “struck by the ways it doesn’t change at all.” Indeed, listening to the many presentations, an alternative conference theme could have easily followed the old adage, “the more things change, the more they stay the same.”

These two ideas—religious change and religion’s stability—are not as conflicting as they appear on the surface. Sociologists often embrace this contradiction of simultaneous progress and stasis. We set out to explain cases that are worthy of sociological inquiry precisely because they challenge working assumptions in some respect. Yet at the same time, we rely on the stability of patterns and trends to lend credence to new ideas: we set out to prove that what we suspect is happening isn’t just white noise, coincidence, or spurious, but something real and consistent. Sociologists attempt to explain new social occurrences (change) with reliable, reproducible data (stability). Several presentations at the ASR annual meeting demonstrated this alternative conference theme; three of them are discussed here.[i]

One of the most prominent recent changes in the American religious landscape is the rise of the “nones,” or those who claim no particular religious affiliation. Richard Cimino and Christopher Smith explore the emergence of a more visible and actualized form of nonreligion in their recent book Atheist Awakening: Secular Activism and Community in America. Ryan Cragun, Warren Goldstein, and Jesse Smith participated in an Author Meets Critics session devoted to this book. While these critics pointed out that some of the organizational history was inaccurate, nonreligious labels (e.g., atheist, agnostic, humanist, secularist) are not interchangeable, and the book would have benefited from more direct engagement with social movement literature, the overall reception was warm. As atheists as a collective continue to grow and organize, their place in the social world—and the religious world—is worth examining.

However, as “atheist” becomes an increasingly legitimate and salient social identity and atheists organize into groups that increasingly resemble typical social movements, atheism, in many ways, resembles religion. Indeed, Cimino (who was unaccompanied by his co-author) pointed out that atheists often use religious metaphors, practice secular rituals, and may even refer to their gatherings as “atheist church.” This might not be surprising, as some have argued religious terminology is the best we currently have to describe nonreligious beliefs, practices, and ideologies. The Q&A following the panel ended with a short but lively discussion on whether atheism actually is a religion. The argument goes: if an ideology becomes dogmatic and questioning prevailing wisdom is not tolerated, that ideology has morphed into something akin to religion. In other words, if atheists believe without a doubt that god(s) does not exist, they are, in fact, religious atheists. However, the extent to which atheists as a whole accept such a proposition is debatable.

Another presentation added important details to this discussion of nones, and also demonstrated that reinforcement of the status quo can sometimes accompany change. In his presentation “The Dechurching of America: Why People are Increasingly ‘Done’ with the Church…but not with God” (based on work co-authored with Ashleigh Hope), Josh Packard admitted that the trend toward disaffiliation has been impossible for scholars of religion to ignore, and many have discussed at length how and why people lose their faith. (It is also important to note that next year’s ASR conference theme will explore varieties of nonreligion, continuing these conversations in greater depth.)

However, scholars of religion are quick to point out that “no affiliation” is not synonymous with “no belief,” and that the nones are comprised largely of those who still retain some level of religious or spiritual belief, despite disengagement from organized religion. Packard quoted several respondents emphasizing that although they have left the church, they have not abandoned their faith. Indeed, this movement away from institutionalized religion is becoming a popular area of study, as researchers are looking more closely at the various combinations of believing and belonging, which include groups like the spiritual-but-not-religious (SBNRs) and cultural Christians (e.g. Orestes “Pat” Hastings, who received this year’s McNamara Student Paper Award and presented “Not A Lonely Crowd? Social Connectedness, Religious Attendance, and the Spiritual But Not Religious”).

A third presentation demonstrating this alternative theme, titled “The Rhetoric of Obedience: Gender, Religion, and Family Life in a Modernizing Indonesian City,” took place during the Presidential Panel on religion and gender. Rachel Rinaldo discussed how the rhetoric of submission among Muslim couples is more complex than we might expect. While men remain the head of the family, whose primary obligation is supporting wife and children, it is not unusual for wives work outside the home—though they often must ask permission of their husbands. There are inconsistencies in this worldview, Rinaldo adds: yes, women are by and large considered equal to men, but their utmost responsibility is the home, where they are expected to obey their husbands.

However, Rinaldo points out that as women become more involved in public life, public and private spheres becomes more discrete; consequently, as women become more visibly independent and their roles more varied, the rhetoric of submission in the home becomes stronger. The workplace may be an “escape” where women are increasingly welcomed (or at least tolerated), but the household is the “last bastion” of women; it is not as affected by social change as the public sphere. And if women need to be reminded to obey, Rinaldo suggests, that means there must be contexts where they’re not. Because the culture of many Muslim societies is changing, if people still wish to continue traditions privately, they must use religion as a justification of such arrangements—not culture.

Though conference themes are intended to encompass the largest possible range of presentations, the meeting included many panels with varying relevance to the theme of religious change. This included panels dedicated to the intersection of religion with topics like health, the environment, gender, sexuality, violence, and politics. This year’s meeting also introduced the ASR’s first attempt at a Graduate Student Mentoring Lunch, which saw a handful of senior scholars discussing their areas of expertise with graduate students. Rhys Williams, a former ASR president, expressed that graduate students today are forging connections with others in outside departments much more than they have in the past, confirming that conferences like ASR have become an integral part in the development of scholars’ early careers.

You can see the program for the 77th Annual Meeting of the Association for the Sociology of Religion in its entirety here. Next year’s annual meeting will take place 19-21 August 2016 in Seattle, Washington, and the theme will be “Exploring Diversity: Varieties of Religion and Nonreligion.”

[i] Discussion of presentations is based on those sessions I was able to attend. Also, as a researcher of nonreligion myself, I was prone to see these presentations as particularly exemplifying the theme of religious change.