Transnational Gurus and the Making of a Modern Devotional Public

Through virtual extensions of her material presence, Amma has transformed herself into a non-sectarian religious “brand,” competing for devotees in a growing soteriological marketplace. 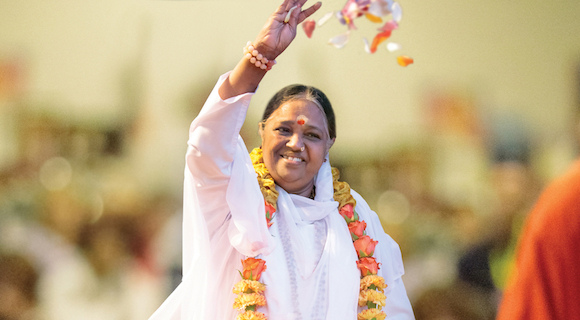 The Hugging Guru: Amma and Transnationalism

In this interview conducted at the 2018 EASR conference in Bern, Marianne Qvortrup Fibiger speaks to Sammy Bishop about Amma, a guru who has become world famous for her healing hugs - apparently giving more than 33 million hugs over the past 30 years. They discuss the ways in which different audiences can interpret Amma's message, and how she reconnects Hindus in diaspora with their traditions.

Transnational Gurus and the Making of a Modern Devotional Public

During the reception following the first South Asian performance I attended after moving to Denver, I met several members of the Denver Tamil community. Towards the end of my conversation with a woman from a village outside Chennai, she began to tell me about her devotion to Amma. She began by asking, “Do you follow Amma?” And without waiting for my response, she volunteered, “We are all Amma devotees here. We just went to see her in Las Vegas.” I knew that she came from a conservative Brahmin background; so, it was surprising to see her enthusiasm when she spoke about Amma. Curious to know more, I asked her how she became interested in Amma. She quickly turned to her daughter and asked her to share her first experience of meeting Amma. There was wonder and joy in her daughter’s voice as she told me of her plans to go see Amma again. This exchange was illuminating as I was unaware of Amma’s popularity in the broader South Indian Tamil community. Before listening to this podcast, it had seemed somewhat baffling that Amma would appear in Las Vegas. Dr. Marianne Qvortrup Fibiger explains how Amma’s embrace of her position as a transnational and “translocal” guru makes the broad reach of platforms such as Las Vegas fitting for her message.

The phenomenon of buying and selling spirituality has always been a part of public religious praxis. With transnational spirituality comes a neoliberal underpinning in which identities and cultural icons can become brands in which people can invest. Listening to Dr. Marianne Fibiger speak about Amma and her remarkable relationship with a broad community of devotees, I was struck by Amma’s uncanny ability to “market” her message to various groups. Fibiger describes this process as “hearing with different ears.” She references a devotee who remarks that Amma is “truly a saint,” in order to show how Amma has become “transnational” through a sort of Christianizing of her status as divine. It also appears to show Amma’s skills at making herself appealing to both local and universal communities. In many ways, Amma’s “universalism” dovetails with the efforts of early transnational yogis such Swami Vivekananda, Aurobindo, and BKS Iyengar. They are able to repackage yoga as a universal health and wellness practice that does not require scriptural knowledge. Through a disciplined, embodied, practice, one would gain spiritual enlightenment. For Amma, hugging functions as both an act of love and darshan (seeing/experiencing the divine), helping to fashion a sort of humanistic theology (Lucia, 6).

Fibiger’s interview underscores the sheer numbers of Amma devotees as well as their varied backgrounds. The material presence of Amma is buttressed by a robust virtual one. Her website and social media presence are indicative of a savvy marketing platform. Her physical presence lends authenticity to her online brand. My response considers how transnational gurus such as Amma have learned to navigate a global neoliberal marketplace in order to sell their ideas. Amma, similar to conservative Indian public figure Ramdev, appears to have a keen understanding of her audience and how to disseminate her message and broaden her appeal. While Ramdev uses patanjaliayurved.net to market products building his name as brand, Amma’s website centers on building her brand by hawking her message. On https://amma.org/ the visitor is greeted by a smiling Amma with open arms, her tour dates emblazoned across her image. Linking a devotional picture of Amma with her next tour presents her persona and message as important and valuable commodities in high demand. Just below her image on the home page, the visitor will see four links detailing what Amma is doing now, how to donate, and information on Amrita Yoga (her signature practice). Here, the main facets of Amma’s brand emerge: charity, accessibility, and a doctrine to follow. The bottom of the home page has a brief introduction that describes Amma as a transnational spiritual teacher. Statements such as “she never asked anyone to change their religion” and “her entire life has been dedicated to alleviating the pain of the poor, and those suffering physically and emotionally” are designed to cement a vision of Amma as the accessible divine.

While her Facebook pages are largely centered on events and appearances, Amma uses her Twitter handle (@Amritanandamayi) to promote her message and build her brand as the “Hugging Guru.” The social media communities that form around Amma (e.g. unofficial “Amma” social media accounts) reinforce the transnational character of her message. These disparate groups of devotees form virtual networks through which Amma’s message disseminates. This devotional network further boosts the reach of Amma’s message and platform for charitable donation. Amma also has a series of apps (Amrita Apps). These apps provide links to her social media, news of her appearances as well as chants for sādhana (daily practice) and seva (service) opportunities. In these ways, Amma becomes a “full-service” spiritual guide, larger than just her person and her hugs. She also has several books and a few periodicals along with Amrita TV which continuously connect her devotees to her message (Lucia, 6). Through these virtual extensions of her material presence, Amma has transformed herself into a non-sectarian religious “brand,” competing for devotees in a growing soteriological marketplace. 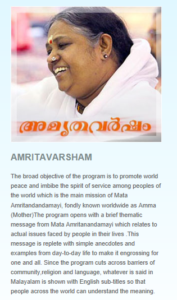 Above, advertisements for one of the several shows on Amrita TV that features Amma. The network offers a variety of wholesome programming, including comedies and dramas, not just devotional programming. This program, Amritavarsham, aims to “promote world peace and imbibe the spirit of service among peoples of the world.” It opens with a brief message from Amma in which she shares “simple anecdotes and examples from day-to-day life to make it engrossing for one and all.” English subtitles are provided “so that people across the world can understand the meaning.”

Marianne Quvortrup Fibiger’s research on Amma highlights an important aspect of public religion: the making of a devotional public. Near the beginning of the interview, she calls Amma “a trans-local, transnational, global guru of today.” She then describes Amma’s appeal to her diverse community of devotees as rooted in her “authenticity,” which allows her to be a “traditional bhakti guru” as well as have “universal appeal.” Fibiger’s also points out the unsettling imagery of a large public darshan (40,000+) with Europeans in the front row in white and everyone else behind them, though she notes that these events were often a place for Hindus to reconnect with their faith. These communal gatherings of devotion provide a good example of the delicate balancing act Amma performs between the universal and local aspects of devotion. Transnational gurus like Amma must repackage religious praxis in the language of human connection in order to appeal to a diverse and broad constituency. In doing so, Amma and her message help build a public devotional community held together by commitment to abstract values such as love and spiritual harmony that are achieved through practices and teachings rooted in specific traditions. I think Fibiger’s comments on translation and understanding of religion are particularly interesting in this context. She suggests that transnational gurus like Amma can function, in a way, as translators of traditions, producing “bridges of understanding.” The questions that follow are: What is the content of this “understanding”?  And for whom is it understood?  Fibiger’s discussion near the end of the interview regarding her project on East and West spirituality underscores the ways in which these questions produce the boundaries within which these emerging spiritual identities are being forged and negotiated.