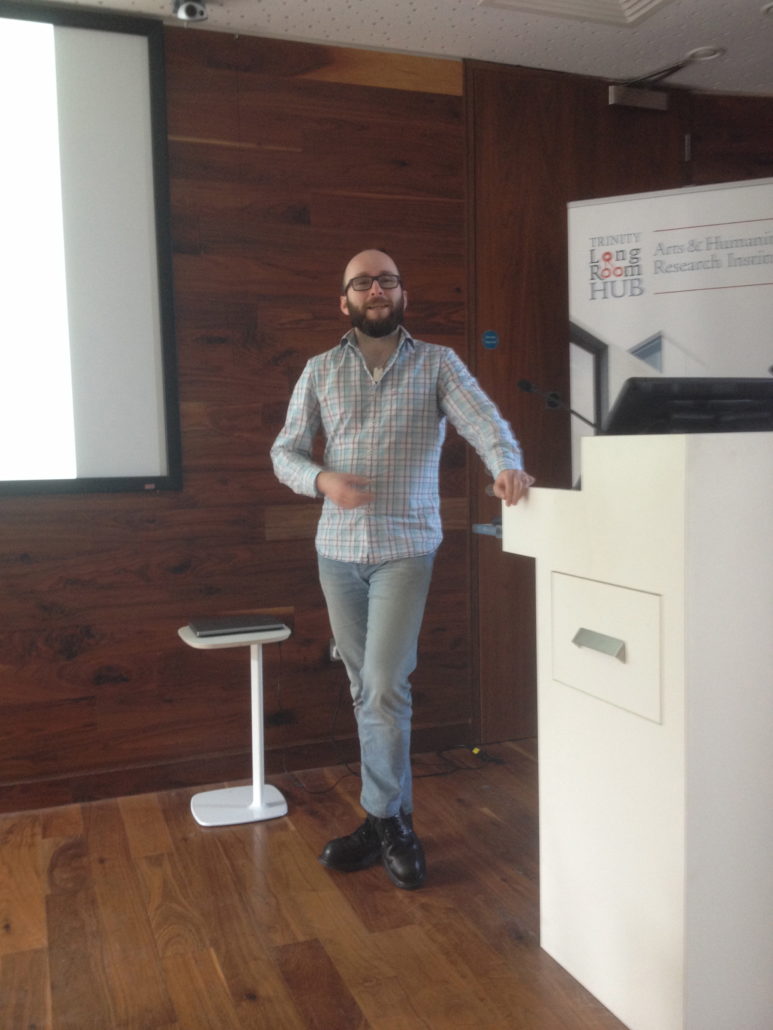 Eoin O'Mahony is an assistant lecturer in the Dept of Geography at St Patrick's College / DCU in Dublin. A sociologist by training, he completed a PhD in geography in 2014. The thesis, completed at Maynooth University, was concerned with the places of the secular and the sacred in Ireland. His research interests are varied including derelict spaces in Dublin city, the politics of warehouse worship space and housing policy. He is hoping to single-handedly break the hegemony of precarious academic labour by tweeting at @ownohmanny.

Eoin O'Mahony is an assistant lecturer in the Dept of Geography at St Patrick's College / DCU in Dublin. A sociologist by training, he completed a PhD in geography in 2014. The thesis, completed at Maynooth University, was concerned with the places of the secular and the sacred in Ireland.

His research interests are varied including derelict spaces in Dublin city, the politics of warehouse worship space and housing policy. He is hoping to single-handedly break the hegemony of precarious academic labour by tweeting at @ownohmanny.

The fourth annual conference of the Irish Society for the Academic Study of Religions took place at Trinity College Dublin on May 11th. It was organised in association with the Trinity Long Room Hub Art & Humanities Institute and sponsored by the Department of Religions & Theology, TCD. This year, it took a novel turn. In place of an event over two or three days, it was in the form of a research slam, a format set to test the garrulous nature of the academic. This was to take account of the IAHR Congress in Erfurt later this summer. Following an opening address from the outgoing president of the Association, Dr. Patrick Claffey, the slam began in earnest. The Society has a relatively small number of members but we had twelve presentations, seven minutes and one carefully monitored countdown clock.

Chris Heinhold (University of Chester) told us about his theory-building approach to investigating modern British Shia identity. Chris is about to embark on intensive fieldwork but has already noted how being part of a diaspora is performative. As a researcher and migrant himself, he has made attempts to build a flexible theory based on data collection. How culture is remembered and mythologised formed the centre of the contribution by Deirdre Nuttall (independent researcher). The stories we tell ourselves influence the way we act and the story of Ireland has been told largely through Roman Catholic action. She has found that the lives of a working class Protestant minority are largely absent from the folklore archives. Early attempts at nation building in Ireland reinforced a Catholic retelling of the myths at the expense of a shrinking Protestant minority.

In further tales of cultural erasure, Jenny Butler (University College Cork) told us about Irish fairy beliefs. She is trying to address the academic deficit in this subject. In most academic studies of Irish culture, the focus is on fairy beliefs as “explaining away” rather than as an animistic worldview; for example, there is a focus on folk stories in which fairies are blamed mostly for the ill-effects of human interaction with nature and fairies were often said to be the cause of infant loss or disability and even bad harvests. Her dialogical and anthropological approach is making an attempt to plait strands of research that currently run in parallel.

Lawrence Cox (Maynooth University) brought us on a lyrical journey of the lives of Buddhist monks from Ireland to Asia. He narrated these accounts through the letters sent by these monks in a poetic stroll through space and time. Tadhg Foley (NUI Galway) told us about the wanderings of Max Arthur McAuliffe. McAuliffe’s efforts to avoid responsibility for his progeny was bested only by his commitment to translating Sikh holy texts. Christopher Cotter (Lancaster University) brought us on a technical journey across continents. Christopher walked us through the process by which the Religious Studies Project manages content and podcasts across time zones and continents using online collaborative software.

Ireland’s missionary past was recalled in a presentation by (UCC’s) Yuwu Shan. His new research on the Columban missions to China over the course of 150 years shows us that globalisation is not necessarily a recent phenomenon. Through the archive available to him in Dalgan Park, the Columban order’s world headquarters based in Kildare, Ireland, Shan brought their long history in China to life. He is working with photographs and other material to reconstruct the efforts of the holy order navigating turbulent political revolution. Colette Colfer (WIT) and I outlined our initial data from a new project mapping the warehouse worship spaces of Dublin and Waterford, two very different cities. Our work is focused on the ways that warehouses form community around Pentecostal churches and mosques, often defying a visible centrality usually reserved for religious space in Ireland, a majority Catholic country. We are planning a lot more fieldwork. Alexandra Greiser (Trinity College Dublin) told us about transhumanism and how it may be developing into a new universalism through a scientific discourse. This forms part of a larger project she is working on that will take a comparative perspective and a possible account of multiple modernities. Bringing the universal to the local, Vlad Kmec (UCD) told us about his research on the formation of religious identity among migrants to Ireland. He is conducting focus groups with young people and adults among the Czech and Polish communities to examine the functional and substantive roles of religion in migrant lives.

Olivia Wilkinson (TCD) is interested in the role of faith based organisations in disaster relief efforts. She has conducted extensive participatory methods in her fieldwork in the Philippines as a way to examine what is counted as faith based in the post-Haiyan aid process. What gets prioritised and, perhaps more importantly, what does not is of central concern to her research. James Kapaló (UCC) told us about a relatively new network called the Marginalised and Endangered Worldviews Study Centre. Its main work is to build comparative perspectives on these endangered of marginalised worldviews and their cultural expressions. The projects here are engaged forms of research and encouraging of a counter-hegemonical perspective for these forms of knowledge. Some were running to the seven minute bell, others seemed to have timed it perfectly to 6 minutes and 57 seconds.

Our slamming over, Brian Bocking (outgoing secretary) recalled for us how far the academic study of religions in Ireland had come in a few short years. Brian has been instrumental in founding and developing the ISASR, as well as the Department of Study of Religions at UCC (the only department of its kind in Ireland) and in his short lecture, summarised for us why the academic study of religions remains vital. He drew a crucial distinction using an analogy between astrology and astronomy. For astrologers, a cosmological system of belief in the power of star alignment forms the basis for earthly action. Among astronomers, the gathering of evidence about the composition of star systems helps us to understand our place in the universe. Both are concerned with the stars but equally both observe from a position of relative powerlessness over their object of study. The academic study of religions, in this way, is just as bound by tradition and human agency as their confessional co-researchers in Theology.

The day’s proceedings were rounded off with a book launch. The book, Muslims in Ireland: Past and Present (Edinburgh UP), is the first complete study of a little known Muslim presence in Europe. Two of its five editors, Oliver Scharbrodt (Univ. of Chester, formerly UCC) and Tuula Sakaranaho (Univ. of Helsinki) spoke about the purpose of the book, its meaning to the academic study of religions in Ireland. Its remaining editors, Adil Hussain Khan (Loyola University, New Orleans), Vivian Ibrahim (Univ. of Mississippi) and Yafa Shanneik (Univ. of Chester, formerly UCC) were acknowledged. Edinburgh University Press sponsored the reception that followed and the Silk Road Café provided wonderful food. The conference as a whole points to a secure future for the small and yet vital academic study of religions in a country with a long tradition of theological investigation. It is not that one pushes the other out of the light of investigation. Rather, it is the academy investing itself with a way to specify the meaning, location and features of religious culture.