The Interstices of Science and Religion

Having exiled the supernatural, science finds itself left with the task of writing a modern genesis, or a liturgy for a secular age. Science and religion are not ancient concepts. What we think of as inherently scientific today may have carried theological overtones in times past; what we conceive of as religious may have likewise found support in scientific circles. Both categories have emerged through complex and contradictory histories: 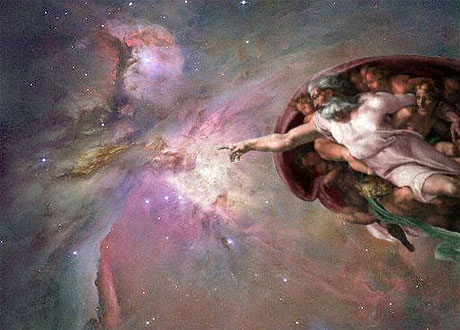 Lewis West is a graduate student at Harvard Divinity School and managing editor of Cosmologics: A Magazine of Science, Religion, and Culture. His background is in South Asian Studies; his current work concerns religion in interwar America and Europe. He grew up outside of Philadelphia. You can reach him at: lhw135@mail.harvard.edu.

Lewis West is a graduate student at Harvard Divinity School and managing editor of Cosmologics: A Magazine of Science, Religion, and Culture. His background is in South Asian Studies; his current work concerns religion in interwar America and Europe. He grew up outside of Philadelphia. You can reach him at: lhw135@mail.harvard.edu.

The Interstices of Science and Religion

Science and religion are not ancient concepts. What we think of as inherently scientific today may have carried theological overtones in times past; what we conceive of as religious may have likewise found support in scientific circles. Both categories have emerged through complex and contradictory histories: not only have the ideas and practices associated with each shifted continually, but the very existence of the categories themselves is of relatively recent vintage.

In his interview with the RSP, Peter Harrison sketches out the basics of this historical argument. It’s an essential framework and one that Harrison has explained in far more detail elsewhere. And while we might hope for future elaboration in certain areas—perhaps a look at science as something constituted not only within “Europe” but on the borderlands and at points of encounter[1]—Harrison’s narrative offers a refreshing take on an issue too often staged as a tale of religious decline or scientific triumph.

Yet, though Harrison’s explanation of how science and religion emerged in the West as discrete categories is both rigorous and relevant—public conversation has yet to adopt a similar lens—I personally find the connections he begins to make at the end of the interview equally stimulating, if only perhaps because of their more speculative nature. Harrison takes on, among other things, the emphasis on big history in popular science and education. This is, for him, science attempting to fill the mythical and ethical gaps left after the decline of religion. Having exiled the supernatural, science finds itself left with the task of writing a modern genesis, or a liturgy for a secular age.

In the final installment of his 2010 Gifford Lectures, Harrison picks up on a similar theme. He wonders if science, having at last rid itself of its religious origins and influences, might need once again an infusion of spiritual energy. Without a continued interaction with religion, science lacks the motivating power to command much enthusiasm. Now, it’s easy to read this as a retelling of Einstein’s assertion that “science without religion is lame, religion without science is blind.” However, within the context of Harrison’s historical model—which rejects the type of essentializing statements that flaw Einstein’s commentary—the suggestion that science need turn to religion, however, reflects the sterility that comes from a hermetic discipline, one entirely closed off to the vital power of diverse conversations. In response to this, science, along with “big history,” works to author a new set of myths.

In that same lecture, Harrison talks about various members of the New Atheist movement. He reads several quotes: the language is technocratic, enthusiastic, and utopian. In a way, it blurs the lines between scientific and religious speech. Similar to the desire for new, logical creation myths, these visions of a future enriched by technological power seem almost eschatological. Yet while they do testify to a scientific turn to religious sources of ethical authority, they also, surprisingly, fit into what we might see as a tradition of scientific messianism and technological piety.

We might even understand this mingling of scientific and religious language as born at the start of the industrial age. Andrew Ure, a Scottish businessman and doctor, understood the place of Christianity and of the machine as extremely similar.[2] Religion and mechanization both shape the workers into a single force, a body undivided and unified. Here, however, we find not the unification of the mystical body of Christ, but rather the forging of a new entity imagined in both technical and theological registers.

More recent writers and artists have experienced the ambiguity between religious and scientific language in similar ways. Fritz Lang’s 1927 film Metropolis, for example, represents a document deeply imbued with themes at once theological and scientific. The protagonist, feverish, has multiple visions: the machine that powers the vast city becomes the demon Moloch, the agent of the oppressive state becomes a preacher, the statues that line the city’s cathedral become death. The automaton that wreaks havoc on the city is a prophet and a temptress; the safe haven of the rich is a technological Eden. This is in no way a simple theological critique of scientific production. It’s a window onto an anguished cosmology in which the bounds of science and religion are not fixed, and the anxieties of modern power continue to haunt and to frighten.[3]

A decade or so later, Simone Weil’s work pointed to a similar interaction. When she examines the factory, her language is predictably theological. But when she turns again to faith, she finds that the necessity of God is a “blind mechanism” and the indifference of the world is—metallic.[4] Not only does the power of scientific production take on a religious coloring; the experience of belief itself begins to change under the influence of mass production.

These three—a businessman, a director, and a writer—of course represent highly disparate and perhaps isolated figures. Moreover they each speak in conversation with a specific historical moment. Yet they also point to something deeper: a persistent collapsing of theological and mechanical language, an inability to adhere to these separate spheres. When Harrison notes the tendency of “big history” to resemble myth, when the New Atheists talk of the coming millennium, perhaps they reflect not only the ethical problem of secularized science, but also a tradition of writing and speaking that has continually stumbled as the modern categories of science and religion have hardened. Harrison’s narrative elegantly explains much of the contemporary “conflict” between science and religion. But it also points us towards new histories of the spaces in between these two reifications. It encourages us to look to how these categories were experienced, how they overlapped, and how they collapsed in moments of turmoil and danger. It gives us the foundation to explore not only the processes through which modern categories have come to be, but also to appreciate the figures who confound such processes and instead struggle to interpret the world through lenses at once intensely scientific and deeply theological.

[1] I’m thinking of, for example, the critique David Scott lays out in his comments on the study of Hegel and history. See David Scott, “Antinomies of Slavery, Enlightenment, and Universal History,” Small Axe 33.13.3 (November 2010): 152-162.