Gods and Demons, Scholars and Lawyers: Brief Reflections on American Religion and Law

Some religion scholars got into studying the law through studying New Religious Movements (NRMs) or minority religions, as they tend to be treated differently under the law. Talking to lawyers is a real skill, and is very good at it. In the subfield of traditional American church-state studies, legal historians, lawyers, lobbyists, and religion scholars convene for conservation and debate, mostly about First Amendment jurisprudence. 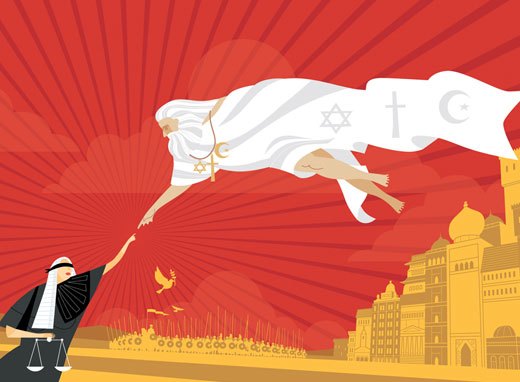 Charles McCrary
Charlie McCrary is a PhD candidate in American religious history at Florida State University. His dissertation is a history of "sincerely held religious belief." He blogs at Religion in American History and Religion Bulletin. He is on Twitter @CharlesMcCrary.

Charlie McCrary is a PhD candidate in American religious history at Florida State University. His dissertation is a history of "sincerely held religious belief." He blogs at Religion in American History and Religion Bulletin. He is on Twitter @CharlesMcCrary.

In this interview with Brad Stoddard, Professor Eric Mazur discusses a variety of issues relating to religion and law in the USA, such as the evolving state of First Amendment jurisprudence, the Religious Freedom Restoration Act, dominant trends in the study of religion and American law.

Gods and Demons, Scholars and Lawyers: Brief Reflections on American Religion and Law

Talking to lawyers is a real skill, and Eric Mazur is very good at it. In the subfield of traditional American church-state studies, legal historians, lawyers, lobbyists, and religion scholars convene for conservation and debate, mostly about First Amendment jurisprudence. As Mazur explains in his RSP interview, that conversation has in recent years lost its place, at least at the American Academy of Religion, and so he has revived it with a Religion and Law discussion group, which has met concurrently with AAR for each of the last two years (full disclosure: I have participated in both meetings). These conversations—at the AAR meetings and in the field more generally—are lively, rigorous, and fascinating, but sometimes frustrating. Unlike many other fields, the range of topics is actually quite small but the variety of approaches is wide. This self-imposed limitation was, according to Mazur, a primary reason for forming the discussion group. This is a group of people who come from very different backgrounds and perspectives—and with different goals—but can talk about the same things, namely, court cases dealing with the First Amendment’s establishment clause and free exercise clause. This is the opposite of many subfield groups, who are organized by a method (ethnography, for example) and use that same method on vastly different data sets. Here, we have a quite small shared data set but diverse methods. Everyone can speak at length, using shorthand, about certain acts, cases, decisions, and dissents, and everyone in the room can follow it. But why these people care, and, more practically, what they’re trying to do, can result in some talking-past each other. Few people are as good as Mazur at bridging these interests and assembling the components for a productive exchange.

The interview includes a number of interesting exchanges, as Mazur describes the state of the field, the advent of the discussion group, and his own career. I was particularly interested in Mazur’s answer to the question about why there is an increasing interest in religion and law. He noted that some religion scholars got into studying the law through studying New Religious Movements (NRMs) or minority religions, as they tend to be treated differently under the law. One of Mazur’s books, here.) This focus does bring out a possible tension between two approaches. Are we studying the law, the Supreme Court decisions, and legal language, etc., or are we studying religious groups and how their practices and beliefs shape and are shaped by law? Of course, it can be both, but the different emphases can evince different goals among scholars. Mazur highlighted the tension between those who have a “normative notion” of religious freedom and those who do not (at least not so explicitly.) On the normative side are not just lawyers, but also theologians, philosophers, lobbyists, and even clergy members. Others take a more descriptive/analytical approach, seeing the law as an institution with effects on American (religious) life and thus worth studying in historical or sociological ways.

In my view, there are two ways that the field of religion and law should expand. First, I think that “law” has been taken to mean primarily the First Amendment’s religion clauses, and there are many other interactions between religious communities and the law worth studying. Mazur mentions this briefly in the interview. Religion scholars would do well to learn about tax law or tort law or intellectual property. Law is not simply religious freedom. And, furthermore, religious freedom means a lot more than First Amendment law. The discourse of freedom, the various states of freedom and un-freedom under which subjects live, and the processes by which freedom is manufactured and protected are all topics that could be taken up by scholars of religion and law. Second, delimiting our area of focus to the United States can miss the international context for American religious law. On one hand, the limited scope makes sense, since American law does apply, for the most part, to America. However, American religious freedom, understood as a human right, is being naturalized and exported. This has tremendous ramifications for foreign policy, religious nationalism, and diplomacy. Constitutional scholars who focus on religion largely have ignored these important developments.

That being said, I think there is a place for the type of “traditional” constitutional conversations Mazur has advocated and facilitated. As I stated above, it is enjoyable and somewhat rare to have a room (or some non-physical space) full of people who speak the same language, who know what Reynolds and Schempp and Boerne v. Flores and RFRA mean. It can lead to productive and detailed conversations. Historians and other scholars contribute to public understanding, but they also can be involved in shaping the law, through an amicus brief or as an expert witness, for example. Many religion scholars (though of course not all) are wary to do anything that smacks of “advocacy.” However, if we are writing about contemporary laws and their impact on religious communities, or about the logic structuring certain laws and cases, our work can have effects even if we do not intend them. So, why not be intentional about it in the first place? Or at least be willing to engage in conversation, if not outright “political” action? If we are going to engage in this type of public work, we need a common language to speak. Working with academics can be an unpleasant experience, and our analytical goals can distract from the winning cases or lobbying for particular causes. But, if lawyers and scholars are going to talk to each other, it has to be at least somewhat on the lawyers’ terms.