In this response Mandy McMichael highlights the advantages of interpretative frame used by Chelsea Belanger in her interview on Christian beauty Pageants. "Noting the tendency of the few scholars who do study pageants to default to the Miss America Pageant," McMichael explains, "Belanger asks listeners to consider the diversity of pageant systems in America as a subject in need of study. She thus steps outside the Miss America spotlight and into its far-reaching shadow to consider how religion functions in other pageant systems in the United States." 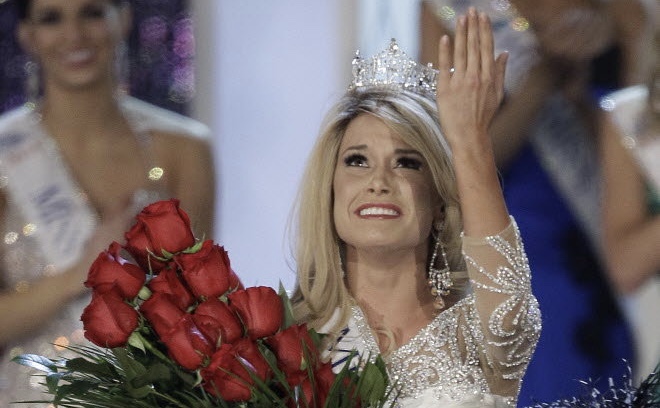 Christian Beauty Pageants: Beauty is in the eye of the creator

Written by Mandy McMichael in response to a podcast by Chelsea Belanger and Kristeen Black.

The oldest – and arguably most well-known – pageant in America is the Miss America pageant. Founded in 1921 as a way to extend the summer season in the resort town of Atlantic City, New Jersey, Miss America has endured scandals, protests, and changing hemlines to remain America’s “ideal.” It should come as no surprise that just as most of America’s presidential candidates have claimed Christianity, so have the women chasing the crown to be America’s queen.

Journalists, bloggers, and even the Christian Broadcasting Network have noted the prominence of Christian involvement in the pageant. Some have questioned Christian pageant participation while others have celebrated it. The “type” of Christian woman who competes is as diverse as the nation she is hoping to represent: Protestants and Catholics, mainlines and evangelicals, and even Pentecostals have had their time in the spotlight in the pageant’s almost 100-year history. Christianity functions in the Miss America Pageant, as in politics, in a myriad of ways.

While the Miss America Pageant has increasingly garnered serious scholarly attention, including a groundbreaking work by Sarah Banet-Weiser in 1999, fewer scholars have explored the relationship between Christianity and the pageant. Still, even on the question of religion, some scholarship exists. Most notably, Charles Reagan Wilson and Karen Tice have both investigated the link between Christianity and pageant. Their work informed my own research to understand the religious history of the Miss America Pageant.

Southern historian Charles Reagan Wilson focused on the confluence of southern beauty culture and pageants, explaining that any potential conflicts between southern religion and pageants “have somehow been bridged, and to understand this accommodation one must see the beauty queen in the South as an embodiment of the southern civil religion”.

In her study of campus pageants, Karen Tice, Professor of Gender and Women’s Studies at the University of Kentucky, devoted an entire chapter of Queens of Academe: Beauty Pageantry, Student Bodies, and College Life to attempting to unravel some of these connections and explore their implications. “Numerous beauty contestants in both campus and national pageants routinely and unabashedly display zeal for Jesus and assertively use their tiaras and titles to embody and spread evangelical Christian convictions, body theologies, and self-enhancement homilies while combining them with secularized grammars of class and body makeovers,” she noted.

Cheryl Prewitt, Miss America 1980, saw God’s hand in her Miss America win. “Could trying for the title of Miss America be what God wanted me to do with my life” she questioned, “that is, if my purpose was to use the position as a means of witnessing for Him on a world-wide scale? The more I thought and prayed about it, the more certain I became that it was”. Both Wilson and Tice point to national winners like Prewitt, a Pentecostal Christian from Mississippi, as evidence for their claims. Wilson noted, “In Prewitt’s persona, the beauty queen had become an icon of religious edification” while Tice asserted that Prewitt offered “another noteworthy example of a Miss America who has successfully merged pageants and preaching”. They observed that contestants testified to their faith in the midst of the secular pageant and showed how that language bore out in the public sphere.

My own work on Christianity in the Miss America Pageant considers how church and contestant used the pageant to form faith and identity and how the pageant used church and contestant to remain relevant in a society increasingly suspicious of pageants. This proved a mutually beneficial relationship for church and pageant. In many respects, the role of religion in the pageant defies explanation. Or, rather, evidence does not suggest one all-encompassing answer. Like most instances where sacred and secular meet, the relationship between faith and pageants is not a simple one.

While my work, and indeed much of the scholarship on pageants, focuses primarily on the Miss America Pageant, Miss America is not the only beauty contest competing for the spotlight. Pageants are big business in America with titles ranging from Miss Rodeo America to Miss National Peanut Festival and contests available for all ages from infants to senior citizens.

Thus, the role of religion in pageants is begging for further scholarly treatment.

Chelsea Belanger’s research promises to contribute to this ongoing discussion. Belanger, a graduate student at the University of Central Florida, is using Christian Smith’s subcultural identity theory to explore how religion functions in beauty pageants. Noting the tendency of the few scholars who do study pageants to default to the Miss America Pageant, Belanger asks listeners to consider the diversity of pageant systems in America as a subject in need of study. She thus steps outside the Miss America spotlight and into its far-reaching shadow to consider how religion functions in other pageant systems in the United States.

More specifically, Belanger approaches her research wanting to understand “why women choose to compete in beauty pageants” and “how religion is displayed” in them. She plans to ask former contestants and winners from a variety of pageants, “Were there ways in which they used their religion through that experience?” I found Belanger’s desire to look at Christian pageants in addition to studying the presence of Christians in secular pageants particularly noteworthy. The two pageants she named as potential interlocutors were Miss USA and Miss Christian America, and I think that such comparative work will prove fruitful toward discovering and articulating the allure and power of the beauty pageant in American culture.

Another “Christian” pageant system that could inform Belanger’s research is Pure International Pageants. Indeed, this organization may prove a better conversation partner than the Miss Christian America Pageant. Even though Pure International Pageants does not require its competitors to be Christian, it claims to be “a Faith Inspired organization founded on Christian, Biblical principles” and does require all participants to “respect our Christian values.” Its website provides a more extensive archive than that of Miss Christian America. In addition to detailing the pageant’s history, sponsors, and mission, the Pure International Pageants website provides competition information, including dates and deadlines for pageants, information that I was unable to find on Miss Christian America’s website. Such information would allow Belanger to observe some of the pageants in person in addition to reading about their structure and format.

Some questions that her current research trajectory raised for me include: why do Christians need their own pageants when secular pageants are flooded with Christian participants? If some Christians are opposed to secular pageants, why do they still find a pageant model valuable? What are some of the negative side effects of pageant participation experienced by winners and losers alike? Finally, what lessons are implicitly or explicitly being taught to Christian women by turning being a “godly woman” into a competition?

The potential contributions of Belanger’s work are many. By looking beyond Miss America, her research promises to illumine the diversity of pageant culture in America. Her exploration of religion’s role in pageants, including how idealized gender roles are promoted in and through pageants, will add to ongoing conversations about Christian participation in beauty pageants, highlighting the fact that pageants offer complex sites of religious ritual worthy of academic study.

Sarah Banet-Weiser. The Most Beautiful Girl in the World: Beauty Pageants and National Identity. Los Angeles: University of California Press, 1999.