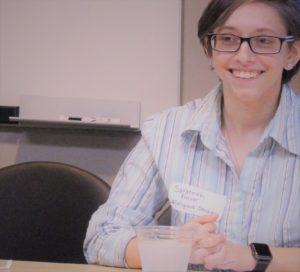 Savannah H. Finver is a doctoral student in Comparative Studies, with an emphasis in religious studies, at Ohio State University. Working primarily through discourse analysis, she examines how the category of religion is made manifest in and through U.S. legal discourse in the form of legislation and court documents, as well as how these legal documents and decisions are contested and expressed by organizations and practitioners. Relying on scholarship emerging out of fields/disciplines such as religious studies, political science, history, cultural studies, and legal studies, she aims to trace the context in which “religion” became a category in need of protection in the U.S., how this protection became encoded in U.S. law, and the ways in which it manifests (and the socio-political implications thereof) in various ways across different groups and subjects.

Savannah works as a Features Editor and interviewer for The Religious Studies Project. She has also appeared in a few of the monthly Discourse! episodes. You can learn more about Savannah and her work here.

Tune in for our new Discourse! episode with Carmen Becker, Susannah Crockford, and Savannah Finver as they discuss legal issues of rights, abortion, protests, and more!

In this episode, Dr. Méadhbh McIvor joins Savannah Finver to discuss her recent book Representing God: Christian Legal Activism in Contemporary England. Dr. McIvor provides our listeners with the background for her project; the method of ethnography, as well as its challenges and implications for the study of religion; and how the belief in a certain kind of afterlife impacts the kinds of legal and political activism that her interlocutors are willing to engage in.

In this January episode of our current events podcast, Discourse!, Savannah Finver speaks with Candace Mixon and Suzanne Newcombe as the team wrestles with the QAnon Shaman and the January 6th attack on the U.S. Presidential election certification, pandemic anti-vaccine misinformation campaigns, and growing evidence of the "conspirituality."

Kitchens and Constructions of Religious Subjectivity in Black Atlantic Traditions

In this episode we discuss Elizabeth Perez's award-winning book *Religion in the Kitchen: Cooking, Talking, and the Making of Black Atlantic Traditions*. Listen in to learn more about how religious subjectivity is constructed around the process of preparing ritual meals in the Lucumí tradition.

In April’s episode of Discourse!, Chris Cotter, Chris Silver and Susannah Finver place the current global situation relating to coronavirus front and centre in their discussion.