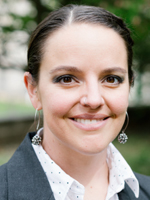 Sarah Imhoff is Associate Professor of Religious Studies at Indiana University Bloomington. Her research asks questions about how bodies and their attributes, such as gender, race, and ability, shaped and are shaped by religion. Underwriting many of my research projects are questions about how embodiment makes religious meaning, and how religious discourse makes bodies. In her first book, Masculinity and the Making of American Judaism, she argues that American Jewish men in the early twentieth century were gendered differently from American norms, and that this masculinity helped acculturated Jews argue for the value of an American Judaism.

Her work has appeared in the Journal of Religion, Religion and American Culture, American Jewish History, Religious Studies Review, Jewish Social Studies, and other academic journals and edited volumes. She is also co-editor of the journal American Religion with Cooper Harriss.