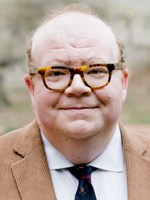 What are the limits of scripture as a performative concept? In this response to this season's episode with Richard Newton, M. Cooper Harriss examines Newton's hybrid understanding of scripture as a forceful and malleable process of signification.