In partnership with the details of the other four lectures – by Grace Davie, Callum Brown, Jonathan Lanman and Monika Wohlrab-Sahr –  and details of the relationship between the Religious Studies Project and the NSRN.

This podcast in particular is a lecture delivered by Humeira Iqtidar entitled “Secularization and Non-religion in Non-Western Contexts“. This was one of the keynote lectures at the NSRN’s 2012 Conference at Goldsmiths, University of London, in July 2012. 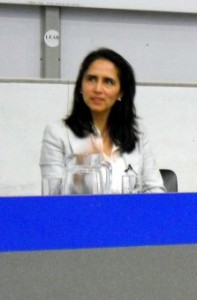 Dr Humeira Iqtidar is Lecturer in the Politics of South Asia at King’s College London, and her research is concerned with exploring the contours of social and political theory particularly in the South Asian context. She is interested in the shifting demarcations of state and market, society and economy, secularism and secularization. Currently her research has two key strands. One explores ideas and practices related to tolerance within the Pakistani context. The other engages with the relationship between liberalization and piety in both UK and Pakistan. Her recent books include Secularising Islamists? Jamaat-e-Islami and Jamaat-ud-Dawa in Pakistan, published by University of Chicago Press in 2011, and also in 2011, a 4 volume collection with Routledge, edited with David Lehmann, entitled Fundamentalism and Charismatic Movements.