In partnership with the details of the other four lectures – by Monika Wohlrab-Sahr, Callum Brown, Jonathan Lanman and Humeira Iqtidar – and details of the relationship between the Religious Studies Project and the NSRN.

This podcast in particular is a lecture delivered by Grace Davie entitled “Belief and Unbelief: Two Sides of a Coin”. This was one of the keynote lectures at the NSRN’s 2012 Conference at Goldsmiths, University of London, in July 2012. 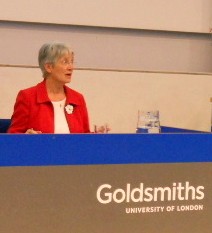 Grace Davie is professor emeritus at the University of Exeter, UK and has held high-profile academic positions in Paris and Uppsala.  She has published a number of key texts in the sociology of religion, including Religion in Britain since 1945 (Blackwell 1994), Religion in Modern Europe (OUP 2000), Europe: the Exceptional Case (DLT 2002) and The Sociology of Religion (Sage 2007/2013). She is the co-author of Religious America, Secular Europe? (Ashgate 2008), and co-editor of Predicting Religion (Ashgate 2003). More recently, she has served as co-director on two European wide collaborative projects on religion and welfare entitled Welfare and Religion in a European Perspective, 2003-06 and Welfare and Values in Europe, 2006-09. Both are central to the understanding of modern Europe and develop – both empirically and theoretically – ideas about inclusion and exclusion, and have contributed to her recent two volume co-edited collection, 2011, entitled Welfare and Religion in 21st Century Europe.

In addition, Grace has published an article with the same title as this lecture in the open-access journal The Changing Nature of Religion.