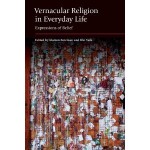 This book is a valuable contribution to the task of increasing scholarly awareness of the need to attend to the variety of local practices that are accepted as ‘religious’ but which have tended to be overlooked when investigating religion in terms of ‘world’ religions.

Vernacular Religion is in part an outcome of the ‘Vernacular Religion – Vernacular Genres’ symposium convened by Veikko Anttonen and Ülo Valk at the University of Tartu in Estonia as part of the 15th congress of the International Society for Folk Narrative Research in July 2005. A number of papers from that conference form the basis of the ten of the contributions in this volume, to which have been added a further eight invited articles. The east European origins of this work are evident in the contributions, and this alone is part of their value, in making available English-language material from Scandinavia, the Baltic countries and elsewhere in eastern Europe (including north-western Russia); additional contributions from England and Argentina, together with one drawing upon traditions in Newfoundland and New Zealand, illustrate the value of contemporary ethnography for the study of religion.

Although the title of the book might suggest yet another work privileging ‘belief’, the editors are at pains to emphasise the extent to which the contributions in this collection explore belief as an articulation of practice; in this way, the authors illustrate the extent to which ‘folk’, ‘popular’, ‘local’ and ‘primitive’ or ‘unsophisticated’ traditions of practice fully deserve their place in the study of religion. This approach has the further benefit of amplifying scholarly understanding of the nature of belief among religious practitioners, partly by enabling access to dialogues between normative versions of religious traditions and locally lived and maintained versions of those traditions, which often express worldviews incorporating pre-existent or other additional elements. In this way, the authors suggest that scholars of religion do not necessarily err when they investigate beliefs but that we will almost certainly do so if we privilege certain beliefs over others, or fail to attend to what ‘believers’ actually do in developing our accounts of those traditions we choose to term religious. This is expressly a collection in which ‘the authors deal with beliefs expressed in a variety of local, historical, textual, virtual and performative contexts’. (3)

Inevitably, therefore, this is also a volume that surveys religious traditions across genres: the reader is offered studies of the construction of time and space, the construction of identity through narrative, the subversive potential of alternative healing practices, and of personal supernatural experiences incorporated by practitioner-believers into ‘orthodox’ religion. Dream encounters with the dead, personal relationships with Christian saints, and the nature of relationships with ‘other than human’ beings (including ghosts and the places they inhabit or through which they can be encountered) are also explored, together with examples illustrating the ways in which such personal relationships form the basis of relational networks, providing various forms of social cohesion and, therefore, individual belonging. The final three contributions offer wider theoretical reflections on vernacular religion, helping to set the earlier articles in context rather than leaving them as unconnected examples.

It is perhaps in the nature of this particular dialogue within religious studies that the thoughts offered in the Introduction and the three closing contributions do more to raise factors to be aware of, and to suggest possible approaches, than they do to offer solutions as to how we might handle and analyse the mass of material our heightened collective awareness challenges us to deal with. This alone is an indication that this book is a further contribution to an ongoing (and relatively new) dialogue within religious studies: like many of the dialogues it explores, this collection is courteously, but deliberately, disruptive. Read it if you are looking for new questions to ask, rather than for easy answers.