NATURALISM AND OUR KNOWLEDGE OF REALITY: TESTING RELIGIOUS TRUTH CLAIMS 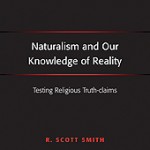 Reviewing Scott Smiths’ new book is really a case of reviewing two separate books, one titled Naturalism and Our Knowledge of Reality and the other Testing Religious Truth-claims, which is no good way to start a review. Nevertheless the book exhibits a clear and highly uneven split between these two titles in which topics of the second title do not appear in any shape or form in topics of the first.

Beginning with Naturalism and Our Knowledge of Reality Scott Smith’s book is a look at certain naturalistic philosophies that have come to underpin much of our current approaches to the social sciences, particularly cognitive sciences. In the introduction we are told of naturalism’s dominance of the fact-value dichotomy, a phrase that occurs infrequently throughout the rest of the book, and worse naturalism despite being one of the key concepts of the book is defined in a footnote: ‘I take philosophical naturalism to be a thesis that reality consists solely of the physical, spatiotemporal world; thus there are no supernatural or non-natural entities or beings’ (pg.1). Scott Smith’s concern is to show how various naturalistic philosophies cannot give us knowledge of reality. And there are a hefty number of names with which Scott Smith contends: D.M. Armstrong, Fred Dretkse, Michael Tye, William Lycan, John Searle, David Papineau, Daniel Dennett, Paul and Patricia Churchland, John Pollock, and Jaegwon Kim. Each, it is argued, presents a naturalistic philosophy meant to give us knowledge of reality which in fact fails to do so.

If this seems like an overwhelming list of names for a two hundred fifty page book (less if you discount the pages dedicated to Testing Religious Truth-claims) then you’d be correct. I will admit to only a certain degree of familiarity with some of these figures but it is clear that Scott Smith gives little time to fleshing out their ideas. Many of these naturalistic philosophies are complicated endeavours and require an understanding of the findings of cognitive studies in the past few years to grasp how some of these arguments work. Yet for some reason Dretske, Tye, and Lycan are all treated in a single chapter at blistering speed. While the other philosophers under scrutiny get a chapter to themselves this one chapter makes it apparent that Scott Smith is rushing through these ideas such that when he comes to criticise them his own arguments have more of a feel of assertions.

Perhaps the greatest flaw of Naturalism and Our Knowledge of Reality is that it isn’t written by Errin D. Clark. Principally it is a good idea to let a Phd student write a chapter for a book but in this case it does Scott Smith no favours. Clark’s chapter on the Churchlands is not only better reasoned, he gives them a much more detailed and fairer hearing, it is also better written. Clark’s chapter is well laid out and it is easy to follow the progression of point to point as he explicates the Churchlands’ philosophy before finally giving his own critique. The overall impression is one of more coherency and a fairer analysis than anything Scott Smith provides. I hazard that had the whole book been written by Clark it would be significantly better.

This brings me to why I have reviewed two books. From the title and the introduction it is suggested that Scott Smith’s book is a look at the way in which these naturalistic philosophies might be applied to religious truth-claims. Yet no such effort is made throughout the nine chapters in which he deals with naturalism. In fact I struggled to even find mention of religion anywhere in this part of the text. It reads more as an introduction to and critique of naturalism, and a poor one at that. The only serviceable chapter is Clark’s which is hardly reason enough to buy the book. For those who want an introduction to naturalism or the philosophy behind cognitive science there are better introductions out there. Religion does, however, make a return in the final chapter for Testing Religious Truth-claims.

Scott Smith having assumed that he has categorically disproven the worth of naturalism for knowing reality in the previous chapters then asks the logical question of how do we know reality. We are informed that because there are nonphysical entities that match up with physical ones, my thought about a red car matches up to the red car out there, we require ‘an order of being that has explanatory power, but is different from all other things which we naturally expect an explanation’ (pg.204). We are informed that because humans not only survive but thrive also, this is a clear indicator that we were designed by a being that is different from us. Clearly it is religion that can justify our knowledge of reality but this poses another question, which religion? Again Scott Smith provides the answer by presenting three criteria for figuring out which monotheistic religion does this: the historical accuracy of its claims, that the God of this religion is shown to care for us, and the coherence of their moral claims.

The whole chapter is a thinly veiled Christian apologetic dressed in a philosophical discussion about naturalism. This is not how we might test religious truth-claims’ knowledge of reality but how Christianity confirms our knowledge of reality. As a Religious Studies text Scott Smith’s book has no place; this is not a book about religion, it is a religious book. It is a mistake to read this book as anything other than a Christian philosophical response to the outside challenge of Naturalism. Thus for anyone studying how Christians respond to certain external pressures then this book is probably a good primary source from which to draw from. As an academic text within Religious Studies however this book has no value.