CHURCH GROWTH IN BRITAIN: 1980 TO THE PRESENT 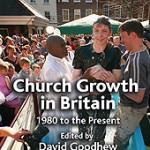 In recent years, the secularization thesis has come under sustained attack from a wide variety of sectors within the study of religion. Much of this critique has come in the form of reframing our understandings of religion by focusing upon contemporary forms of spirituality, new religious movements, digital religion, the sacred, vernacular religion, material religion, and more. However, it is very rare to find a book which purports to ‘provide a forceful critique of the notion of secularization’ by focusing upon the attendance and membership of Christian churches – the very thing which formed the empirical basis of the secularization thesis. I was intrigued…

Church Growth in Britain, edited by David Goodhew, is a uniformly well-written book which forms part of the Ashgate Contemporary Ecclesiology Series, and contains twelve chapters focusing upon mainstream and new churches in England, with Northern Ireland, Wales, and Scotland being treated in their own separate section with one chapter each. According to Goodhew’s introduction, ‘it is likely that over 5,000 new churches have been started in Britain in the 30 years since 1980’ with particular growth ‘in areas of migration, population growth and economic dynamism’ (7-8). Every chapter does an excellent job of nuancing this picture and contributing to Goodhew’s case that  ‘[i]t is impossible to account for the expansion of the new churches by merely attributing it to the decline of other churches’ and that ‘[t]he rise of the new churches represents one of the most significant developments in the Christian Church over the past 50 years.’ (From Margins to Mainstream…, 186, 192)

However significant this development might be for the Christian Church, the volume is hampered by an overstatement of this significance. For example, whilst the new churches in Colin Marsh’s study might well represent  ‘a large and potentially dominant aspect of Birmingham’s Christian community’ (The Diversification of English Christianity…, 204), do they really present ‘a forceful critique of the notion of secularization’? Kenneth Roxburgh’s chapter title – Growth Amidst Decline – makes my point better than I can. There is no denying that the growth of mainstream and new churches in Britain is incredibly significant, and It is refreshing to see scholars turning their attention back to these churches (widely ignored as scholars seek out the exotic and unfamiliar). However,  whilst adding much of value to the debate, this volume cannot simply wish away the observable decline in belief, practice, and affiliation which is taking place at a national level.

Ultimately, my criticism can be traced to a uncritical account of secularization, which is almost uniformly understood throughout the book in its wholesale ‘hegemonic meta-narrative’ form (Goodhew, 17), drawing heavily upon the work of Steve Bruce and Callum Brown. To take a representative example, Paul Chambers castigates ‘most academics’ , who are apparently unduly ‘concerned with focussing on statistical measures of religious belief and church membership’ (Economic Factors…, 233), whilst he himself utilizes dubious census results based on ‘identification’ with Christianity, to make the totally unrelated claim that ‘religious belief […] remains buoyant’ (221), seemingly not appreciating that secularization predicted precisely this move from public institutional religion to private individualized ‘beliefs’ .

In pointing out these misrepresentations, I am merely playing devil’s advocate. There are many more positive things which can be said about the collection, and Goodhew is well aware that his focus on growth is unbalanced ‘not because that is all there is to say, but because growth has been so widely ignored’ (254). Firstly, the in-depth accounts of local expressions of growth do provide a timely reminder of the limitations of a simplistic reading of the secularization thesis, and act as a call for a widespread scholarly return to focusing upon more mainstream religious groups in their historically hegemonic contexts. Secondly, the book shines a light on constituencies that force us to rethink traditional understandings of ‘British’ religion. The city of London consistently maintains much higher levels of church attendance than the rest of the UK (John Wolffe and Bob Jackson, Anglican Resurgence) and, according to Alana Harris ‘[w]hile London is home to 11% of all Christian churches in England, it accounts for 20% of the nation’s churchgoers and caters for 57% of all worshippers in their 20s.’ (Devout East Enders, 44). Such figures, whilst fascinating in themselves, raise interesting questions about the religiosity of national and international migrants, who consistently challenge standard models of believing and belonging in the UK (Richard Burgess, African Pentecostal Growth). Finally, the book reminds scholars of the potential impact of their work in the real world. In this case, academic discourse on the secularization thesis has undeniably played a role in how many Christian communities in Britain see themselves, to the extent that an’ influential Church of England report, Mission-Shaped Church’ (2004), was ‘predicated on C[allum] Brown’s analysis in The Death of Christian Britain‘ (Goodhew, 10fn21). This illustrates the potential for scholarly theories to, in some cases,  become self-fulfilling prophesies when released into the real world.

Ultimately, this collection has been brought together to offer ‘churches, church leaders, and theologians the intellectual space in which they could […] let go of the eschatology of decline that the secularization thesis has instilled and replace it with an alternative eschatology’ (Goodhew, 21). In doing so, it regularly reads like a Christian version of the ‘Oscars’ – celebrating those clergy and individuals who have managed to foster growing congregations. However, despite this theological underpinning, this inexpensive, well-written collection does exactly what it sets out to do, providing engaging and in-depth accounts of a neglected phenomenon that adds further nuance to our understanding of religion and secularization in contemporary Britain.