A CRITICAL INTRODUCTION TO THE STUDY OF RELIGION 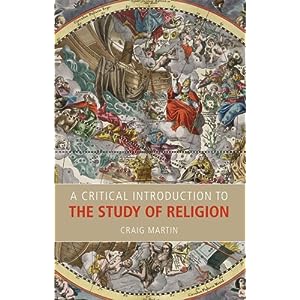 A Critical Introduction to the Study of Religion by Craig Martin, Assistant Professor of Religious Studies at St. Thomas Aquinas College, New York and editor of the Bulletin for the Study of Religion, is essentially an introduction to critical theory as applied to the study of religion, aimed at an undergraduate level. Critical theory, or the “socio-functional” approach, as Martin puts it (xiii) seeks to expose the assumptions which a given group takes for granted. As Russell McCutcheon, Tim Fitzgerald and others have persuasively argued, “religion” is a powerful tool in the naturalisation of socio-epistemological norms, which RS scholars may even be an essential part of, by positing “religion” as an existing thing which is “obviously” somehow apart from “culture”. Along the way, Martin does a good job of succinctly introducing the theories of scholars like Durkheim, Mary Douglas, Peter Berger, Bourdieu, Foucault, etc, and of explaining terms like projection, legitimisation, mystification and naturalisation. The chapter on habitus alone, which is as clear a description as I have seen yet, is worth the cover price on its own.

The tone is a bit chatty for my liking, but is certainly readable, and Martin has a real flair for paring the material down to the essentials without losing the clarity of his central arguments. The section on the difficulty of defining “religion” is a good example, and would make a useful introductory reading. I didn’t always agree with his examples, however,  such as when he compares the category “religion” to the category “sea creature”. “Sea creature” may indeed be broader than “fish”, but is still clearly definable, unlike “religion” (5). Some too may find that too many of the examples are drawn from Christianity, something which Martin is open about; I, personally, do not. RS is often, and particularly so in the UK, seen as study of “the other religions”, but this beggars our analytical purpose. If RS does not de-mystify the entanglement of religion and society in our own culture, than it is nothing more than “The Comparison on the Other religions”. In the US, where RS is less entangled with Theology, scholars like Craig Martin and Dale Martin and presumably other people with Martin as their surname are doing good work using Christianity or Biblical Studies as a way into broader themes in RS. Not only that, but I think personally that using Christianity in this kind of work is more productive when teaching in the US or UK; it is harder to see these processes in one’s own culture than in others’, but much more enlightening, particularly for undergraduates.

What is particularly interesting about this book, though, is that it offers a potential alternative “Introduction to Religious Studies” (Religion 101 for our American listeners) course than the “here are the world religions” approach that concerns many of us. Indeed, this is how Martin himself uses the book. As such, it is perhaps a book which will be of interest for teachers, rather than the general RS reader. Most importantly, it suggests that the need for a change in approach has been felt, and responded to.