Vestal Nike and the Corporate Profit/Prophet

The vacuum created by the blatant abuses of power by suddenly illegitimate authorities has exposed the spiritual needs of starving Americans, from sea to shining sea. 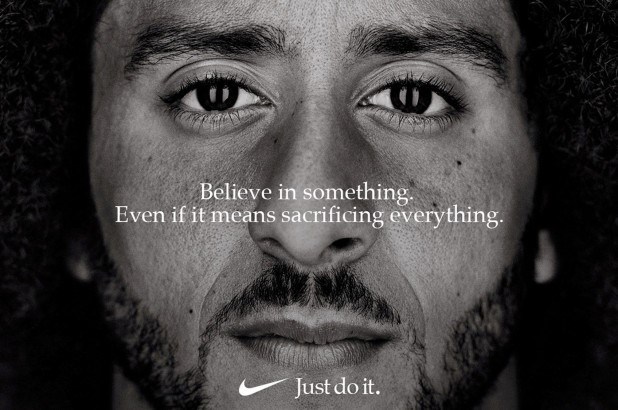 Mark Meehan (PhD, University of South Carolina) is associate professor of business at Rivier University in Nashua, New Hampshire. He teaches global studies courses, with research and teaching interests in traditional Islamic philosophy and art and cultural engagement. He has traveled to more than 50 countries to consult, teach, and lead student groups. He is the former board chair of the International Arts Movement.

Mark Meehan (PhD, University of South Carolina) is associate professor of business at Rivier University in Nashua, New Hampshire. He teaches global studies courses, with research and teaching interests in traditional Islamic philosophy and art and cultural engagement. He has traveled to more than 50 countries to consult, teach, and lead student groups. He is the former board chair of the International Arts Movement.

Vestal Nike and the Corporate Profit/Prophet

Above, an ad from Nike’s 2018 “Just Do It” campaign featuring Colin Kaepernick.

By Mark Meehan
Responding to Religion as a Tactic of Governance, Interview with Naomi Goldenberg by David Robertson

He stares at you across a monochromatic abyss, calm, quiet, and serene. His eyes are dark and gentle, black wells holding no judgement but kindly offering peace.

His smile is just below the surface, an ethnic Mona Lisa. Seeing you seems to be pushing a grin to break the surface of his bearded face. He is deeply content and he wants you to join him. Just below his eyes, across a slightly crooked nose, lays a simple, softly pleading message of meaning to a nation void of belief: “Believe in something. Even if it means sacrificing everything.”

The new American Jesus comes to us from an omni-present deity named for a born-again Roman Goddess. Nike, whose most notable victories are now limited to the Olympics and an occasional US Open, has given voice to a prophet by the name of Kaepernick.

Like most prophets, he caused quite a stir. Some quickly denied his authority, willing to sacrifice offerings on an altar of fire to repudiate his message. Others shouted “Amen,” lining up at temples in generic suburban malls and gentrified city streets to offer their own sacrifice, wearing the sacred swoosh sign of their new prophet as public testimony to their belief.

I kept seeing the face of Kaepernick as I listened to the fascinating podcast of David Robertson interviewing Naomi Goldenberg in Belfast, Scotland. Goldberg reminded us that “there is no religion in the Bible,” pointing toward the historically seamless integration of “faith” within a culture and its various forms of governance. She went on to note the danger posed by those who isolate and use “religion” today as a validating tool for their actions. Policy and practice by authorities can be draped in an authenticating cloak of mythic clout, creating momentum for a range of agendas.

Back in 1697, William Congreve wrote that “hell hath no fury like a woman scorned,” but I suspect the righteous wrath of a religious Republican is far more dangerous to me today.

As an American, I live in a society rife with what Goldenberg calls “religion as strategy.” Specific powers leverage “vestal elements” to hide, obscure, and somehow legitimize their actions. Conservative Christians have started to deploy every Evangelical’s favorite Biblical book, Isaiah, to help them reconcile Donald Trump’s propensity to brag about grabbing women by the genitals. “Evangelical thinker Lance Wallnau figured it out: Trump is a ‘modern-day Cyrus,’ an ancient Persian king chosen by God to ‘navigate in chaos,’” writes Tara Isabella Burton in Vox. Sure, Trump might grab an occasional woman, he might be a rancid racist, he might even spew blatant smears toward all who oppose him, but that never stopped God before!

Wallnau is the same man who proclaimed on Periscope that ““I’m just fed up with the fact that believers have to operate like the Jewish people did.” He said, “They all knew Jesus was the Messiah but nobody actually identified with him for fear of being put out of the synagogue. I mean, Donald Trump is that for me; you’ve got 50 million people that voted for him and you wouldn’t know where they are.” Naomi Goldberg couldn’t have put it more clearly as she talked about the use of “vestal states to mystify and legitimatize.” Wallnau, who claims an earned doctorate from a defunct diploma mill, understood the deeply rooted need for faith and authority and becomes the “Legitimizer in Chief” for American Evangelicals.

At the same time, another bastion of faith, the American wing of the Roman Catholic Church, is making daily headlines for its own abuses of religious power. Back in 2014, CBS News reported that “The Vatican revealed that over the past decade, it has defrocked 848 priests who raped or molested children and sanctioned another 2,572 with lesser penalties, providing the first ever breakdown of how it handled the more than 3,400 cases of abuse reported to the Holy See since 2004.” The Washington Post noted in August that “More than 300 Catholic priests across Pennsylvania sexually abused children over seven decades, protected by a hierarchy of church leaders who covered it up, according to a sweeping grand jury report released Tuesday. The investigation, one of the broadest inquiries into church sex abuse in U.S. history, identified 1,000 children who were victims, but reported that there probably are thousands more.”

So, with one arm of American Christianity lying in bed with Trump and another in the headlines for a rampant sexual abuse scandal that was systematically suppressed by Church leaders, where do Americans turn? Apparently, to Nike. The vacuum created by the blatant abuses of power by suddenly illegitimate authorities has exposed the spiritual needs of starving Americans, from sea to shining sea.

But of course, there is a catch. As Nike filled the spiritual void, another prophetic power, whose authority creates both staggering wealth and profound poverty, spoke. After the release of the ad, Nike’s stock soared. As Nike stepped into the vacuum of values with the message to “sacrifice everything,” the company netted a cool $6 billion in company value as the stock surged 36% on the year. Sacrifice, indeed.

Of course, our President resisted. As Goldberg noted in her talk, “Governments are always a little edgy, sensitive to takeover.” Trump wasn’t going to let Nike move in too easily, tweeting his dissent as Nike jumped on his religious bandwagon. On September 5th, the American President declared, “Just like the NFL, whose ratings have gone WAY DOWN, Nike is getting absolutely killed with anger and boycotts. I wonder if they had any idea that it would be this way? As far as the NFL is concerned, I just find it hard to watch, and always will, until they stand for the FLAG!” Sensitive? You bet. 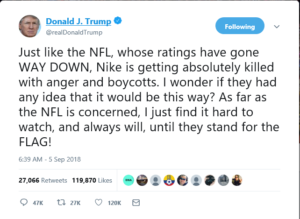 Goldberg ended her talk with a call to action, a plea to make Religious Studies meaningful again by applying what is being done in classrooms and academic journals to real world issues. She challenged scholars to call out those who manipulate the power of religion for their own purposes. Americans are desperate for meaning, and their need marks them as easy targets for bullying on a playground of politics and capitalism. There is something redemptive in Nike’s ad, but we have to do what Goldberg challenged us to do: call out the abuse, even if it opens the door for another bully.