The Winter of (Neo)Conservative Discontent

Looking back on the last 60 years, we can see clearly "the influence of the Catholic neoconservatives throughout the Americas and the world," writes Jesse Russell in this response to our October 21st podcast with Jerry Espinoza Rivera. 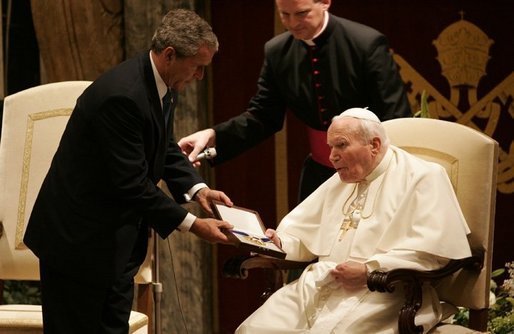 Jesse B.B. Russell is the author of a number of articles on twentieth-century Catholic political thought as well as works on the poetry of Edmund Spenser. He is assistant Professor of English at Georgia Southwestern State University.

Jesse B.B. Russell is the author of a number of articles on twentieth-century Catholic political thought as well as works on the poetry of Edmund Spenser. He is assistant Professor of English at Georgia Southwestern State University.

The Winter of (Neo)Conservative Discontent

In an important recent interview on The Religious Studies Project website, Professor Jerry Espinoza Rivera of the University of Costa Rica provides a valuable analysis of the strange political trend sweeping not only Latin America but much of the world.

Professor Rivera’s analysis further deserves the complement of a discussion of some of the historical background of the neoconservative movement, which I will herein provide in some small measure.

Neoconservatism must be most properly understood as a fundamentally North American phenomenon in as much as it has its origins in the United States and, moreover, in as much as it advocates a distinctly American agenda.  As is commonly known, the intellectual core of neoconservatism was built around Russian-Jewish emigres to the United States, such as Irving Kristol and Norman Podhoretz, who while initially embracing Trotskyism, spurned the Soviet Union after Stalin and later Brezhnev’s anti-Semitic turn. These thinkers (and others) through media outlets such as Commentary Magazine and National Review,  helped to shape how the American right would confront the New Left during the searing culture wars that erupted in the United States in the late 1960s.

However, as much, or perhaps even more than the New Left, the neoconservatives waged war against the Old Right in America. If the Old Right was strongly Protestant Christian, the neoconservatives embraced what they termed “Judeo-Christian” values. While the old American right was ethnocentric and viewed America as fundamentally a white country composed primarily of ethnic Northern European people, the neoconservatives, while engaging in racialist “dog whistles”—Norman Podhoretz was the author of a 1963 Commentary essay, “My Negro Problem—and Ours”—primarily viewed America as a country into which all the people of the world could become a part as long as they assimilated to a vaguely defined “Western Civilization.” Perhaps most importantly, embolden by the slogan, “America First,” the Old American Right was protectionist in economic matters and isolationist in regard to foreign wars. The neoconservatives, however, although having to wait until 2003 for an American president to accept their agenda wholesale, advocated for “free markets” as well as the transformation of much of the world via American cultural capital and American military might.

In the late 1970s, as the impending Reagan Revolution gathered steam, the older generation of neoconservatives were joined by a number of Christian journalists, many of whom, such as Michael Novak and then Lutheran pastor Richard John Neuhaus, had been leftwing activists involved in the Civil Rights movement as well as Vietnam War protests. Others, such as George Weigel, who boasts of his relationship with the older generation of neoconservatives in his 2017 memoir, Lessons in Hope: My Unexpected Life with St. John Paul II, were up and coming Catholic theologians.

With a host of books and essays produced in the 1980s, these thinkers were tasked with what Neuhaus called in his 1984 watershed work The Naked Public Square, “the New Religious Right,” which contrary to the old ethnocentric, triumphalist, and anti-modern tendencies, of, ironically, both Fundamentalist Protestantism and traditionalist Roman Catholicism, would embrace much of modernity while retaining a loosely defined Christian creed combined with American patriotism and unconditional support of capitalism and American cultural and military expansion throughout the world.

The Catholic neoconservatives—Neuhaus would embrace the faith and become ordained a priest in the 1990s—saw much success in their work, as many Catholics did embrace the Republican Party and began to drift away from the left-leaning tenor of the American Catholic Church under the reign of the late Cardinal Bernardin during the 1980s as well as 1990s.

As a result, the Catholic neoconservatives turned their sights on liberation theology, a Latin American movement that utilized some concepts and language from various Marxist schools and which was making inroads not only in South and Central America. Michael Novak crafted two important books dedicated to combating liberation theology Will It Liberate? Questions about Liberation Theology (1986) as well as This Hemisphere of Liberty: A Philosophy of the Americas (1990). More than morality or even theology, these works dealt primarily with economics.

The United States had (and, to this day, has) treated Central and South America as well as the Caribbean as the US’s “backyard.” Thus, the incursion of anti-capitalist ideology into the diverse lands “south of the border” presented a clear and present danger, even after the end of the Cold War, to American influence in Latin America. By posing as benevolent theologians linked (at least on the surface) with the popular papacy of John Paul II, the Catholic neoconservatives hoped they could stop the spread of a theology that, more than it upset traditionalist or conservative Catholic theologians, threatened America economic and geopolitical interests in the region. With the late twentieth and early twenty-first century explosion of conservative Catholicism around the world as well as the lingering post-Cold War American hegemony that has lasted until recent years, the Catholic neoconservatives could consider their project complete.

Now, however, as the Catholic Church appears divided into increasingly polarized camps, consisting of traditionalists, on one hand, and progressives, on the other, the Catholic neoconservatives, who attempted to find a theological via media between the two camps, have found themselves increasingly isolated. Furthermore, in the realm of geopolitics, seemingly amorphous forms of populism appear to be gaining support among large swathes of the population from Brazil, to the United States, to Italy, and to even countries like Japan, thus threatening the neoconservative project of global liberal world order under American hegemonic rule.

While the future of religion, politics, and political theology remains wide open, the immediate past, including the influence of the Catholic neoconservatives throughout the Americas and the world, is coming into clearer focus.