SPSP 2016 Report: The state of religion in social and personality psychology

This past January, the Society for Personality and Social Psychology had its biggest turn out to date for its 17th Annual Convention in San Diego, California. Despite religion, as a broad category of research, all to often being missing in action in the psychological sciences, researchers embracing the study of religion were hard to miss throughout SPSP 2016. Conference report for The Religious Studies Project by Adam Baimel, University of British Columbia. 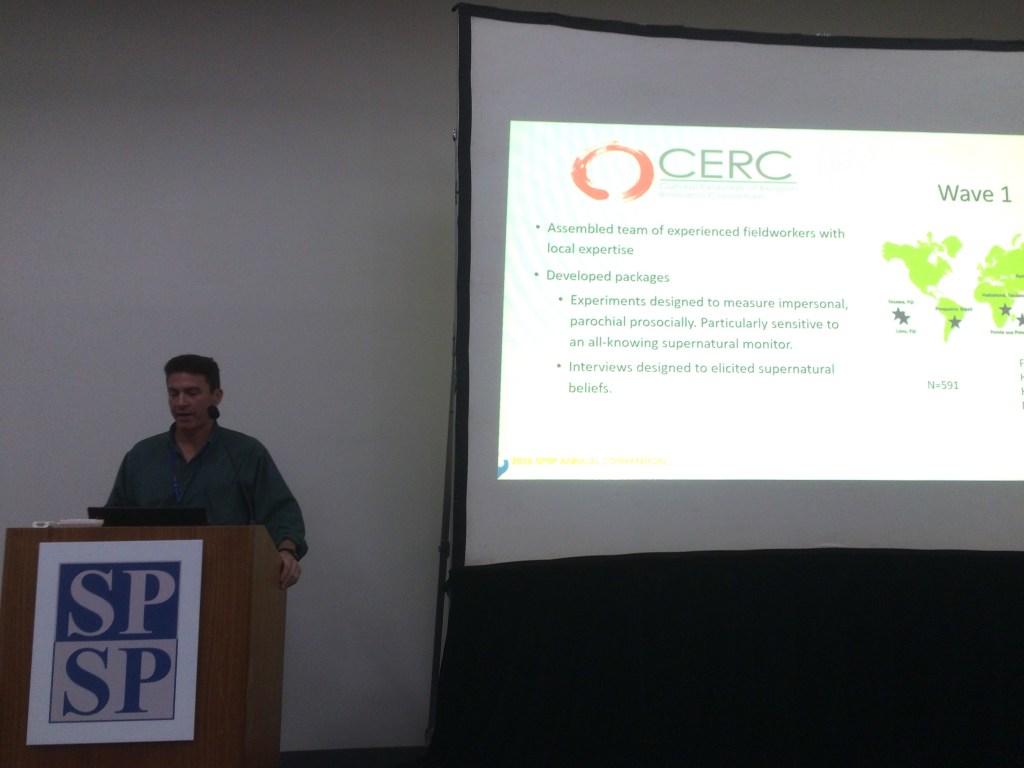 Adam Baimel is a PhD student in Psychology at the University of British Columbia in Vancouver, Canada. His research interests are varied but all circle around the broad topic of religion. His MA work explored how ritualized, specifically synchronous, behaviours can foster perspective taking in small groups of individuals. More recently, Adam has become interested in the experience of awe - and why it is that feeling awe makes individuals feel like they've experienced something meaningful. Adam is from Montreal, Quebec and completed his BA in Psychology and Religious Studies at UBC. Email: adambaimel@gmail.com

Adam Baimel is a PhD student in Psychology at the University of British Columbia in Vancouver, Canada. His research interests are varied but all circle around the broad topic of religion. His MA work explored how ritualized, specifically synchronous, behaviours can foster perspective taking in small groups of individuals. More recently, Adam has become interested in the experience of awe - and why it is that feeling awe makes individuals feel like they've experienced something meaningful. Adam is from Montreal, Quebec and completed his BA in Psychology and Religious Studies at UBC. Email: adambaimel@gmail.com

This past January, the Society for Personality and Social Psychology had its biggest turn out to date for its 17th Annual Convention in San Diego, California. Despite religion, as a broad category of research, all to often being missing in action in the psychological sciences, researchers embracing the study of religion were hard to miss throughout SPSP 2016. Conference report for The Religious Studies Project by Adam Baimel, University of British Columbia.

The Religion and Spirituality Preconference meeting kicked off as Aiyana Willard presented her work on the cognitive foundations of belief. Much ink has been spilled as to what sorts of cognitive processes make supernatural beliefs ‘easy to think’ – Willard’s work demonstrates how we can actually test these theoretical and causal models in the minds of real believers (for more on this, see here). What this type of work demonstrates is that what we need, as psychologists, to understand religion in any sort of systematic way, is access to empirical data.

Representatives from the Association of Religion Data Archives (the ARDA) drove this very point home by presenting both the existing (and quite impressive) database that they have built and what sorts of features users can expect from the ARDA in the near future.  The ARDA currently offers researchers a large collection of international and national survey data on the broad topic of religion – and they have recently made mining through these surveys by topic and specific questions of interest all that much easier. Joining in on the benefits of open and transparent science – the ARDA has made a call for researchers to publish their data sets of all varieties (experimental, ethnographic, etc.) on the website in the hopes of the ARDA becoming the premier location of all that is empirical data on religion. Best of all, their databases are open-access – so get digging, I know I will be.

The remainder of this year’s Religion and Spirituality Preconference emphasized how (1) the psychological sciences can add to our broader understanding of religion as well as (2) how believers can be an important population of individuals to study in furthering our understanding of more typical social psychological hypotheses. For example, Zhen Cheng and Kimberly Rios presented their work on the how stereotype threat – feeling at risk of confirming a stereotype of one’s social group – might play an important role in keeping religious believers from pursuing interests and performing in scientific domains.  This is important to consider given the demographic majority of liberals, and atheists (or at the very least less-fervently devoted) amongst psychologists. Speaking to the complexity of how ‘religion’ manifests in human psychological processes and behavior, Joni Sasaki presented her lab’s work exploring how interactions between genetic differences in oxytocin receptor genes and social contexts moderate the strength of religious reminders in promoting self-control (full paper here). The theme of this bi-directional interest and value in exploring religion in the psychological sciences persisted throughout the remainder of the conference. 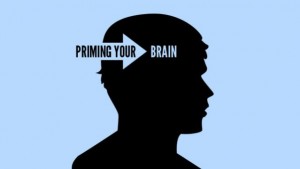 The issue of replicability (and non-replicability) is currently a pressing concern for researchers in psychology, and was a topic of a number of presentations at SPSP 2016 (for more info see here). At the forefront of this ‘crisis’, and of particular interest to those who study religion, is work on priming. Psychological priming, the method of exposing individuals to some stimulus (often done outside of the individual’s awareness) to detect its effects on a later stimulus, is used in all sorts of psychological research. For example, Shariff & Norenzayan (2007), in their now foundational study, had participants complete a sentence unscrambling task that either involved god-related (e.g., blessed, divine), government (e.g., jury, contract), or neutral words. The mere presence of these words serve as a prime, making the concepts of god or government more readily accessible to the minds of their subjects. What they demonstrated is that activating god or government related concepts shifted the norm from being selfish (not giving much at all), to being more fair – as participants, on average, gave up just under half of their allotted windfall of money in a dictator game. These findings have served as the bedrock for continued exploration into the role of religion in sustaining human cooperation.

Despite its varied applications (not just in the study of religion), recent efforts to replicate priming studies have lead psychologists to understand how complicated (finicky) these methods really are. However, as part of a symposium organized to demonstrate important examples of how and when priming is useful – Aiyana Willard presented the results of a meta-analysis (a statistical approach to studying an effect over a number of studies – in this case, 93 studies) that suggests that religious priming is indeed an effective method for studying the effects of activating ‘religion’ on a number psychological processes and behaviors. This effect holds even after statistically correcting for publication bias (the reality that there are many an unpublished study hiding in the physical and virtual file-drawers of researchers around the world).

The psychological sciences face another important problem in understanding religion and more broadly, the psychological foundations of human nature – the over-representation of WEIRD (Western, Educated, Industrialized, Rich and Democratic) populations in our studies. Religion is by no means a monolithic phenomenon, and our understanding of religion should reflect the rampant theodiversity that exists across cultures today, and has existed throughout our collective cultural histories. In one symposium session, researchers representing the Cultural Evolution of Religion Consortium (CERC), with its home at the University of British Columbia, demonstrated how the study of religion is an ideal test case for breaking through this boundary.

Michael Muthukrishna introduced the audience to the Database of Religious History and its goals of becoming a premier source for quantified religious history. This database is being built with the help of religious scholars and historians from around the world whose knowledge of diverse religious beliefs and practices is being mapped and quantified in order for history to move off the page and become subject to statistical inquiry. Edward Slingerland spoke to the value of moving beyond the laboratory and seeking answers to our questions about religion in what he called the untapped population of ‘dead minds’ in the process of quantifying and statistically mining the literary corpus at the core of many religions.

Joseph Henrich and Coren Apicella presented results from a cross-cultural study exploring the relationship between big moralizing gods and prosociality in eight diverse societies around the world. Henrich spoke to the broader goals of such a massive undertaking, in that understanding cultural variation is key to understanding anything about human nature. Apicella presented her work on this project with the Hadza – indigenous hunter-gatherers in Tanzania who serve as an interesting case study for questions regarding religion and morality given that previous ethnographies have indicated that they have no religion at all. In (very) brief, this study supports the hypothesis that belief in omniscient, punishing, moralizing gods extends the bounds of prosociality to distant others – and thus may have played an important role in the expansion of human societies. For the complete report of the work presented at SPSP, check out Benjamin Purzycki et al.’s recently published piece in Nature.

The work highlighted here is just beginning to scratch the surface of what was on offer at SPSP 2016 on the study of religion. However, what is clear across the board is that the general interest in religion as a psychological phenomenon is growing – with the countless poster presentations by the next generation of researchers as evidence. Furthermore, there is a growing consensus in the field that religion is not only an interesting phenomenon to study – but an essential one to explore in furthering our understanding of human psychological processes and behaviors.