The Research Excellence Framework (REF) is something which I have been commenting upon since and constitutes the core of one of my arguments about what it is to do “social science” in my forthcoming The Idea of a Genuine Social Science (Springer, 2018).

A response to “The BASR and the Impact of Religious Studies”

The Research Excellence Framework (REF) is something which I have been commenting upon since 2013 and constitutes the core of one of my arguments about what it is to do “social science” in my forthcoming The Idea of a Genuine Social Science (Springer, 2018). So when the BASR held a panel on the Impact of Religious Studies – a reference to one of the main criteria of REF – I could not help but abuse editor’s privilege and be the one to respond.

(Please note: the views expressed here are my own and do not represent the views of my fellow editors, the RSP in general, or the views of our sponsors. Much as I might like them to.)

For the benefit of the non-British audience who may be unfamiliar with the REF, this is a government “exercise” (as they refer to it on the official website) which, every 8 years or so, determines the level of funding universities shall receive. Universities are assessed according to the quality of their research on a basis of one-star (nationally recognised) to four-star (world-leading), with individual academics assessed based on four contributions from within the period of assessment. Commonly these are research articles in journals or monographs.

Officially, each “profile” which is submitted to REF is assessed on the basis of originality, significance, and rigour. But one of the noticeable things about the 2014 REF was how poorly and vaguely these main criteria were defined and much more effort was invested in explaining HOW these criteria are to be assessed. And this became the true metric for determining the quality of research: Outputs (65%), Impact (20%), and Environment (15%). The most significant was the introduction of “Impact” which was lacking in previous iterations.

At the time I warned (possibly in the voice of semi-hysterical PhD student) of the dangers of Impact, especially for those of us advocating a Weberian-inspired “social science” centred around knowledge for the sake of knowledge or disinterested research (and their various iterations). At the time I was shot down by fellow academics on the basis that Impact only amounted to a small portion of the full profile.

Yet, these responses ignored two important details. First, in 2009 when Impact was first being introduced, a petition by 17,500 academics to have Impact removed was summarily ignored by the HEFCE. To put this in perspective, that was a tenth of the total academic staff at the time in Britain. Meanwhile, the government if it receives 100,000 signatures (out of a population of 65 million) is legally obligated to both formulate a response and discuss the issue in Parliament. Second, in the build up to 2014 there was a sudden growth in university jobs for which the main hiring criteria was the ability to demonstrate Impact, a trend which continues to this day. So, if Impact, is not such a significant aspect of REF, why do the university administrators – mostly businessmen these days – place such emphasis on it? What is that they saw that we missed?

The answer is alarmingly simple, for something that officially amounted to 20% (and soon to be 25%), Impact actually determines how the remaining 80% is to be understood.

For example, if we look at the Outputs portion of REF, the Social Science division (and this is true of the humanities also) tells us that “significance” is: ‘the development of the intellectual agenda of the field and may be theoretical, methodological and/or substantive’ (REF 2012, 67). But what is utterly vague here is just what this agenda refers to. On the surface many assumed that this agenda was to be the standard production of articles, monographs, etc., which we have been engaging in for years. But the reality of the matter is that this “agenda” is in fact entirely determined by Impact. According to which: ‘The sub-panels will assess the “reach and significance” of impacts on the economy, society and/or culture that were underpinned by excellent research conducted in the submitted unit’ (2012, 6). Note here the cross-over of the term of significance, but now with the appended reach.

By reach and significance, REF ‘wishes to encourage the submission of a wide range of types of impact outside academia’ within the spheres of ‘creativity, culture and society; the economy, commerce or organisations; the environment; health and welfare; practitioners and professional services; public policy, law and services’ such that the ‘beneficiaries of impact may include (but are not restricted to) community/ies, the environment, individuals and organisations’ (2012, 68). It continues, in no uncertain terms now: ‘HEIs [Higher Education Institutes] are reminded that impacts on research or the advancement of academic knowledge within the higher education sector (whether in the UK or internationally) are excluded’ (2012, 68). That is not my bold by the way – that is how it appears in the actual document.

To be clear: the intellectual agenda which is to be furthered by Outputs is an agenda which is actually defined by Impact as the ability to engage and influence the public. Now, much of what was discussed in the BASR panel fits within this framework, understanding how the work of Religious Studies may now extend beyond HEIs. And on the surface there may not be anything problematic with this. It fits with a categorisation of sociology I mentioned in my response to James Spickard, Michael Buroway’s idea of public sociology: ‘conveying sociology to a wide lay audience through sociological interventions that set a new agenda for the discussion of public issues’ (2005b, 71).

But while the members of the BASR may feel that they are engaging in public sociology, or something similar, this rests on the implicit assumption that we, the academics, get to decide the sort of impact we wish to make. The clearest example of this being Stephen Gregg’s discussion of RS academics being muted voices. We are muted voices because, as Gregg points out, journalists want black and white sound-bites not complicated responses. But such a response is only indicative of the wider issue: Impact and the REF does not promote nor want public intellectuals. What is really desired is policy experts or policy sociology: ‘sociology in the service of a goal defined by a client. Policy sociology’s raison d’etre is to provide solutions to problems that are presented to us, or legitimate solutions that have already been reached’ (2005a, 9). The closest, in this regard, is Suzanne Owen’s discussion of academic involvement in supporting Druid Network and Pagan Federation attempts to gain charity status as religions.

On one level this may not be too problematic either: we at least have the choice to pick our clients – to decide for ourselves whose practical concerns are worth our attention. However, the REF is far more incipient in this regard.

Back in 2006 the Warry Report, which was one of the precursors that led to the current formulation of the REF, advocated that Impact should be articulated in terms of how universities can stimulate economic growth. Consider also the draft statement for the Knowledge Exchange Framework (KEF) which is widely considered a duplicate of Impact on a grander scale. According to KEF: ‘research is to support further improvements in universities and promote accountability, responsiveness to economic and societal needs and effective use of public funds.’

What we have here is a situation in which, under the surface of Impact in which we have clients in the plural, KEF points us to the fact that there is in reality only one client that matters: the government. 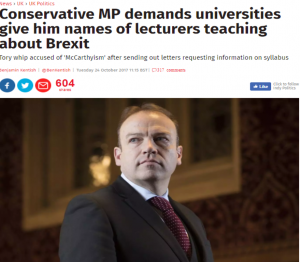 And this was made no more acutely clear than when Tory Whip Charles Heaton-Harris requested vice-chancellors send him details of anyone lecturing on Brexit. A request which, to date, has failed to be adequately explained when it was shot down. It was a “request” that indicated how the government only wants politically palatable research.

This was also made clear by the responses to the so-called benign request. In the words of the Universities and Colleges Union: ‘our universities and colleges must lead the way in defending academic freedom, where received wisdom can be challenged and controversial ideas debated.’

But so long as “exercises” like REF and Impact continue to exist, whether we wish to be Weberian or public academics, none of us are free. The emphasis will always be away from what we want to research/promote and toward what they want to research/promote – a system already in their favour considering they control the money that is making research possible. So, to return to Gregg’s examples (including the one detailed in the BASR Bulletin), the government does not want a critique of the PREVENT strategy. What they want from us is to propose a solution to the “problem” of Islam, they want us to be policy experts giving them a more effective version of the Prevent strategy.

As I argued in my chapter in The Idea of a Genuine Social Science, in the mid-1940s, many academics were concerned by how Nazism and fascism had undermined the possibilities for doing social science – leading to racist, and ultimately fatal, conclusions. Out of this derived the assumption that democracies, particularly liberal democracies, are necessary for “protecting” social science. But it has just been that, an assumption that universities and the democracies they exist in will protect our interests rather than their interests. REF, however, reveals our naivety and complacency on this score. So we are faced with a question, a question we must face with more severity than perhaps we have, is this a game we should be playing?

Burawoy, Michael. 2005b. The Return of the Repressed: Recovering the Public Face of U.S. Sociology, a Hundred Years On. Annals of the American Academy of Political and Social Science 600: 68-85.