Santa Muerte is a death saint with a rich history and reflects the deep interplay of cultures and devotional practices in Mexico. 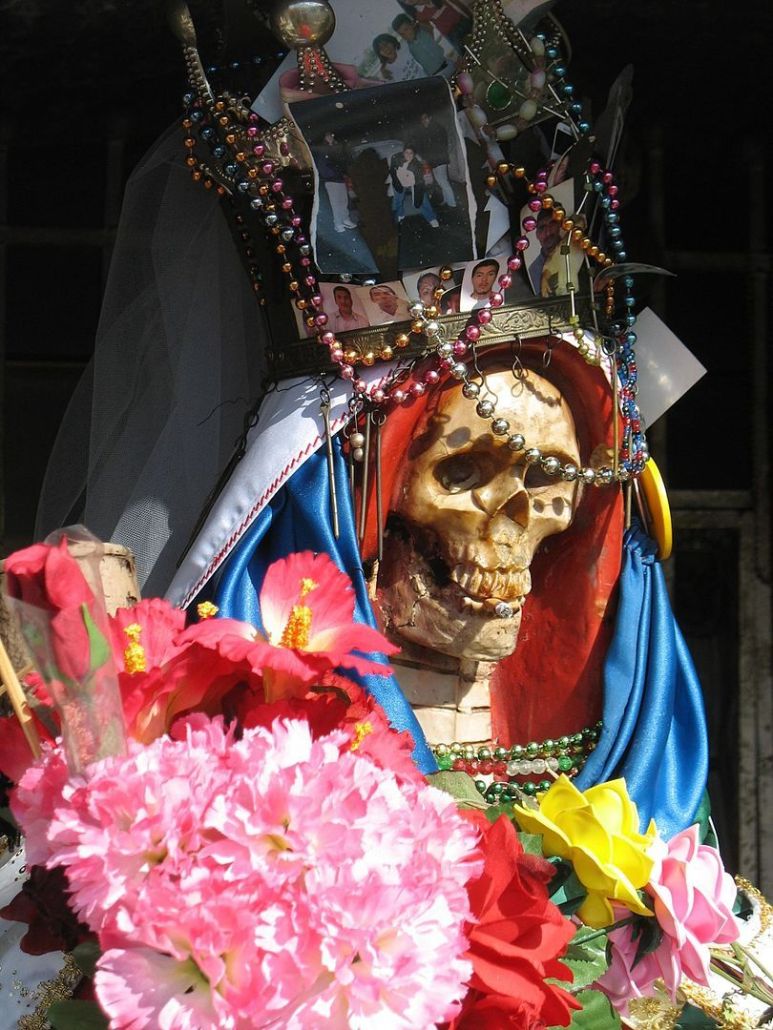 Lady Death and the Pluralization of Latin American Religion

In today’s podcast, Professor R. Andrew Chesnut connects Brazil’s colonial past to its pluralist present and explains why folk saint devotion to Santa Muerte or Lady Death is one of the fastest growing religious movements in the world.

In Mexico, it may appear to outsiders that there is a trifecta of death. After all, there is the Day of the Dead, La Catrina and Santa Muerte. But these are distinct from one another, although often conflated by outsiders.

Day of the Dead, or Dia de los Muertos is celebrated on the 1st and 2nd November. This is a time when Mexicans reminisce about their ancestors, honouring the deceased and in many ways keeping them alive through memories and altars that they build to commemorate them. The famous French sociologist and contemporary of Durkheim, [Robert] Hertz postulated that through mortuary rites, such as funerals, people come to accept the new status of the deceased as a departed member of society, someone who will no longer participate in the activities of the living; someone who no longer has any social effect. Still today in the Western world, when we lose a family or friend, the idea is to grieve and let go. For Westerners, the funeral is a mortuary rite of transition to accept this dramatic transformation in status. However, the Day of the Dead contradicts Hertz’s theory and attests to a starkly different stance in Mexico towards the deceased when compared to the Western attitude.

The dearly departed in Mexico play an active part every year in the lives of the living on the Day of the Dead. Mexicans do not let go of the deceased but rather recall them. The dead, if not honoured correctly, according to some Mexicans, in particular in rural locales, may even pose a threat to the living by bringing them bad luck, potentially cursing them and their ventures. This belief substantiates the social force of the deceased in Mexico and the effect they continue to have on the living long past their demise. Time, money and energy is invested in the deceased, despite their lack of a physical presence. Indeed, a tangible manifestation appears that symbolises the dead when altars are fabricated for them.

Altars constructed to honour the deceased are symbolic expressions or representations of the departed and the love that the living still have for them. They signify the undying bond between living and dead. These altars consist of a photo of the dead surrounded by their favourite objects which are given as ofrendas, offerings, to welcome them and show these souls that they have not been forgotten. Children typically receive toys, candy, sweet tamales, fruit, and other such victuals. Adults receive libations of their favourite alcoholic beverages, their preferred dishes and possibly cigarettes. Sugar skulls, known as calaveras de azúcar, also celebrate the dead. They are inscribed with the name of a deceased relative and placed on altars. A sweet bread is baked called pan de muerto which is gifted to the dead and also eaten by the living, particularly at gravesites where the dead are commemorated.

The Day of the Dead is a hybrid tradition that meshes Indigenous death worship and Catholic practice. Veneration of ancestors was at the fulcrum of many Indigenous people’s religious praxes, as was worship of death deities, and not only for the Aztec, as Dr. Chesnut points out in the interview. In my research, I have encountered a wide range of beliefs in death deities and rites of ancestor veneration amongst to name but a few the Maya, the Zapotec and the Mixtec.  For example, the Maya regularly held blood-letting rituals. The Mayan King, and other nobles would be bled, often by piercing their tongues or ears with a serrated stingray tail and other jagged objects. This loss of blood ensured possession by what was known as the serpents of vision. These serpents, depicted in iconography as gargantuan snakes, served as a gateway from the physical world to the realm of spirits, that is to say ancestors, who were called on for advice. Still today, Mexicans converse with the dead during commemorations and may ask for their blessings in their future endeavours.

Many Indigenous Mexican peoples had special days of the week or a month dedicated to death deities in the pre-Hispanic era, as Dr. Chesnut points out in reference to the Aztec. The Catholic Church sought to annihilate these Indigenous religious activities, but soon realised that they could not exscind them entirely thus instead focused on finding paths of accommodation, enforcing Church rites and beliefs where there was enough contiguity with Indigenous customs for Catholic conventions to be adopted zealously. One of these events was the Catholic holiday, All Saints Day, which rather than becoming simply assimilated, was re-mapped according to Indigenous choreography thus blooming into a syncretic rite of cultural concrescence.

Santa Muerte also hails from the Mexican cultural tradition that relates to death deities and death worship. Some devotees, as Dr. Chesnut points out in the podcast, have linked her to Aztec death goddess Mictecacihuatl, nevertheless we must go beyond the obvious link with the Aztec, as I have stated, and consider the wider cultural importance of death veneration across many of the variegated Indigenous peoples of pre-Hispanic Mexico. Furthermore, although Santa Muerte has Indigenous origins, she is very much a modern death deity who once again must be understood in terms of her hybridity and as an example of the fact that faith is always in perpetuum mobile, altering to fit the zeitgeist, sine qua non it would not survive.

Following on from [Fernand] Braudel, I believe that culture although continually being reinvented in new guises in line with l’air du temps, is characterised by the longue durée, and moreover, even if there is continuity there is also alteration. Thus religion, like most cultural phenomena, is marked by a dialectic of permanence and change as I argue in my forthcoming book ‘Daughters of Death: Female Followers of Santa Muerte’. Veneration to Santa Muerte must be seen through this optic. She is a symbolic complex and much as she hails in part from pre-Colombian mythic structures, she is also distinctly modern, or more aptly, post-modern given that she is amoral and there is no one single version of Santa Muerte. There is no single grand metanarrative that can explain the Bone Mother’s many facets, nor one answer that can elucidate the way in which she appeals to manifold groups of people, from narcos to lovesick housewives.

In her cloaks of many colours, which Dr. Chesnut has described in the podcast, she may provide favours of all sorts to a wide demographic of devotees. In her black gown, she is known for bringing death to enemies, and in her red mantle she aids women with the return of an errant husband, whilst dressed in white, the Bony Lady brings peace and cleansing. Santa Muerte is even protean in her many iconographic depictions. There is sexy Santa Muerte, who dressed in a miniskirt, with a generous bust somehow seems at odds with her cadaverous qualities, incarnating the Hollywood-inspired male fantasies of narcos. Then there is Aztec Santa Muerte who with flamboyant feather headdress incorporates pastiche components from an imagined pre-Hispanic past that is neither spurious nor genuine, but an invention of the past, presupposing past symbolisms and creatively reinterpreting them in a dialectic of continuity and change.

Ultimately, we must understand Santa Muerte as a death saint who is the product of history and the interplay of cultures. She is the fruit of a multitude of relations and events that over time continue to this day to propel the incessant development of an ever-mushrooming group of devotees, which now stretches across the globe.