Resisting Conformity at the Margins of Marginal Christianity

Acknowledging the difficulties surrounding the identification and definition of a subject of study that is not only deliberately diverse but also intentionally resistant to definition, Ganiel and Martí nonetheless discern within emerging Christianity a distinct religious orientation built around the practice of deconstruction. In what her interviewer has reckoned to be the first Religious Studies Project podcast to focus solely on the study of an expression of contemporary Christianity,... 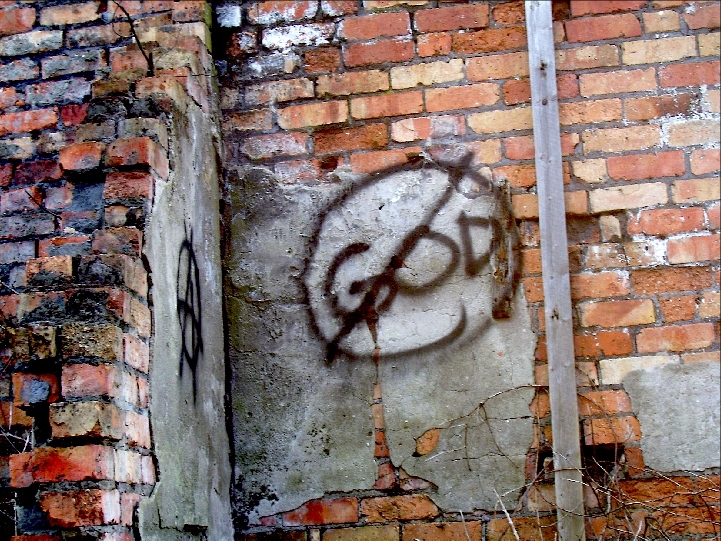 Dr Katharine Sarah Moody (PhD, Lancaster University) is currently a Research Associate in the Department of Philosophy at the University of Liverpool, where she is working as part of the Philosophy and Religious Practices Network. Her research focuses on the intersection of contemporary philosophy of religion, radical theology and the empirical study of Christianity. She is the author of Radical Theology and Emerging Christianity: Deconstruction, Materialism and Religious Practices (Ashgate, forthcoming) and Post-Secular Theology and the Church: Truth, Tradition, Transformation? (Wipf and Stock, forthcoming). She is also co-editor (with Steven Shakespeare) of Intensities: Philosophy, Religion and the Affirmation of Life (Ashgate, 2012). Follow her on Twitter at @KSMoody.

Dr Katharine Sarah Moody (PhD, Lancaster University) is currently a Research Associate in the Department of Philosophy at the University of Liverpool, where she is working as part of the Philosophy and Religious Practices Network. Her research focuses on the intersection of contemporary philosophy of religion, radical theology and the empirical study of Christianity. She is the author of Radical Theology and Emerging Christianity: Deconstruction, Materialism and Religious Practices (Ashgate, forthcoming) and Post-Secular Theology and the Church: Truth, Tradition, Transformation? (Wipf and Stock, forthcoming). She is also co-editor (with Steven Shakespeare) of Intensities: Philosophy, Religion and the Affirmation of Life (Ashgate, 2012). Follow her on Twitter at @KSMoody.

Resisting Conformity at the Margins of Marginal Christianity

In what her interviewer has reckoned to be the first Religious Studies Project podcast to focus solely on the study of an expression of contemporary Christianity, Gladys Ganiel introduces listeners to a modern religious orientation that deserves sustained scholarly attention. The Emerging Church Movement (the ECM) might be numerically small but it is, she suggests, far from insignificant.

Despite a growing number of ethnographies of individual emerging church congregations, as well as critical overviews of the emerging church conversation as an identifiable form of religious discourse, many scholars of religion have either never heard of the ECM or claim, as Josh Packard suggests, that emerging Christianity must ‘join the mainstream or die out’.[1] It is assumed that it is merely a ‘transitional reaction’ against modern evangelicalism that will merge with the liberal mainstream, especially if, as Robert Warner declares, ‘post-evangelicals define themselves negatively and seem unlikely to develop a sustainable and distinct theological agenda’.[2]

But against such assessments, as I have argued elsewhere, emerging Christianity is structured around identifiable sets of values, beliefs and practices that lend it cohesion and relative stability whilst also enabling divergence.[3] Ganiel’s book, The Deconstructed Church (co-authored with Gerardo Martí), is an important academic analysis that also takes the ECM seriously as a phenomenon that is organised around a clear (albeit contested and continually ‘deconstructed’) set of activities.

Acknowledging the difficulties surrounding the identification and definition of a subject of study that is not only deliberately diverse but also intentionally resistant to definition, Ganiel and Martí nonetheless discern within emerging Christianity a distinct religious orientation built around the practice of deconstruction. The Deconstructed Church illustrates in particular how these practices encourage the creation of pluralist congregations and of what Ulrich Beck calls ‘cooperative egoism’,[4] facilitating a strategic form of religiosity through which participants undertake ‘meaning work’ that maintains tensions between individualism and collective identity. Such practices are driven by what Ganiel and Martí call ‘the religious institutional entrepreneurs’ who seek to resist the institutionalization of this orientation under pressures to conform to inherited forms of Christianity – primarily what participants see as the ‘Seeker Megachurch’ and the ‘Solemn Mainline’ models. As James S. Bielo has observed, the emerging church is therefore a particularly rich research site for the empirical study of interacting Christianities, since its religious and cultural critique is dependent upon prevailing traditions as interlocutors.[5] The question of this deconstructive orientation’s ultimate sustainability is, as Ganiel acknowledges, open to debate. But it is also ripe for scholarly study, and for critical consideration from a variety of disciplinary perspectives.

My own research has focused on understanding how the identifiable social or cultural imaginaries that structure what I call the emerging church discursive milieu interact with continental philosophy and radical theologies.[6] As Charles Taylor has noted, when theory ‘penetrates and transforms’ an imaginary, new practices are either taken up or improvised.[7] It is the innovative communicative practices and expressive acts of an emerging church imaginary, which is transformed when emerging Christians engage with the philosophical traditions of deconstruction and materialism, that most interest me – and I see emerging church figures like Peter Rollins (a founder of Ikon, Belfast) and Kester Brewin (a founder of Vaux, London) as catalysts for such an engagement.

In The Deconstructed Church, however, Ganiel and Martí focus on deconstruction as a sociological process that enables the ECM to ‘establish competitive arenas in response to pressures for conformity’ whilst nonetheless continuing to conceive of God in the ‘relatively concrete terms’ of conventional Christian theism.[8] This means that Ganiel and Martí are better able to more adequately represent the mainstream of the ECM than I am, for entrepreneurs like Rollins and Brewin push the emerging church conversation in more radical directions as they engage the work of thinkers like John D. Caputo and Slavoj Žižek. Popular figures in North American emerging Christianity would not understand crucifixion and resurrection in the ways that Rollins does and would not state their disbelief in a personal God or divine salvation as Brewin has.

‘What makes emerging Christianity “Christian”?’, Ganiel is asked in this interview. In her response, she sympathises with those within the ECM who treat this question as one that deflects from more primary issues of concern. She refers to an instance – recounted more fully here – that also recalls the response Rollins gives to the question of the historical resurrection of Jesus. He says, ‘Without equivocation or hesitation I fully and completely admit that I deny the resurrection of Christ’, by which he means that he does so every time he fails to ‘serve at the feet of the oppressed’ and yet also affirms that resurrection in those ‘few and far between’ moments when he stands up ‘for those who are forced to live on their knees’.[9]

Such an apparently evasive answer frustrates not only researchers seeking clarity about the beliefs held by emerging church entrepreneurs like Rollins, as Ganiel notes, but also those who wish them to conform either to traditional theistic belief or to modern atheistic belief.

Rollins’ critique of religious idolatry and ideology is intended as more than a corrective to conventional Christianity that would enable Christians to discover the God beyond the idol ‘God’ and a richer faith beyond instrumental religion without challenging more fundamentally their continued reliance on what he might call – following Žižek – ‘a subject supposed to believe’ on their behalf; namely, priests, Christ, God, the community of believers, the church structures themselves (the buildings, the liturgies, the statements of faith), etc., that sustain the fantasy of the presence and coherence of meaning, purpose, value and truth. On the other hand, however, the experience of the death of such a subject does not result in conventional atheism, since it is not only God that dies (i.e., that does not exist) but a transcendent source of or an absolute justification for any universal principle or set of principles, including those provided by reason as well as by revelation.

Rollins and Brewin are on the margins of a numerically marginal expression of Christianity. However, just as the significance of the ECM lies not in its relative size but in its manifestation of a religious orientation that seeks to resist conformity with inherited models of Christianity, the significance of these two marginal figures lies in the ways in which they seek to resist conformity with both modern western theism and modern western atheism. Rollins and Brewin are, therefore, two of the ‘expert theorizers’[10] within the ECM whose engagement with continental philosophy and radical theology is contributing to the construction of what I call an emerging a/theistic cultural imaginary.[11]

Both Rollins and Brewin propose that there is revolutionary political potential in the kinds of spaces that they advocate, and I am interested in exploring how to measure that claim, even if, as Ganiel notes, there are methodological difficulties in determining the impact of emerging Christianity on society more broadly. I would especially like to examine further the discursive motif of suspension in their work and to investigate empirically the communal practices that enable such a suspension of belief and identity. These religious (or, rather, ir/religious) spaces are imagined to be individually and collectively transformative, temporarily subtracting participants from their social roles and relations and allowing them to envision new forms of interaction and association: ‘we not only affirm one another in excess of our culturally given identities but expose these identities as contingent’, Rollins writes, concluding that thereby ‘we can more productively engage in exploring how to transform society’.[12] But the efficacy of these practices of suspension has yet to be documented. What kinds of sociality are exhibited in and encouraged by participation in ‘suspended space’? And what is the relationship between such spaces and participants’ wider social, political and economic lives?

Beck, Ulrich, 2010, A God of One’s Own: Religion’s Capacity for Peace and Potential for Violence, Cambridge: Polity Press.

Ganiel, Gladys, and Gerardo Martí, 2014, ‘Northern Ireland, America and the Emerging Church Movement: Exploring the Significance of Peter Rollins and the Ikon Collective’, Journal of the Irish Society for the Academic Study of Religions, 1/1, pp. 26-47.

[4] See Beck, A God of One’s Own and Beck and Willms, Conversations with Ulrich Beck.