Report: 2015 Joint Conferences of the New Zealand and Australian Associations for the Study of Religion

The biennial conference of the New Zealand Association for the Study of Religions (NZASR) and the annual conference of the Australian Association for the Study of Religions (AASR) were held together in Queenstown, New Zealand from December 8-10 2015. Interdisciplinary perspectives and theoretical approaches across the humanities and social sciences were evident in the wide-range of papers presented. Islam, and Asian religions more generally, were the most consistent objects of focus, perhaps unsurprising given Australasia’s proximity to Asia and recent increased media attention to the Islamic State. 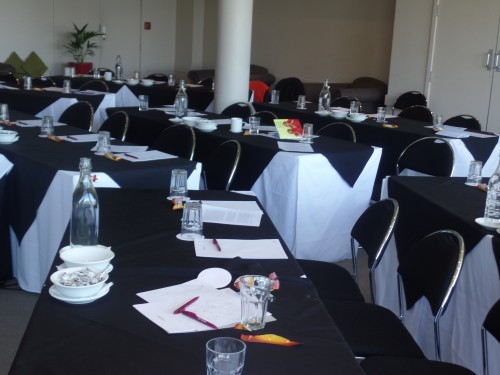 Bruno Shirley is a postgraduate student in the Religious Studies Programme at Victoria University of Wellington. He is interested in the intersection of religion with politics, identity, and violence, particularly in South Asian Buddhism. Email address: brunomshirley@gmail.com

Bruno Shirley is a postgraduate student in the Religious Studies Programme at Victoria University of Wellington. He is interested in the intersection of religion with politics, identity, and violence, particularly in South Asian Buddhism. Email address: brunomshirley@gmail.com

John Shaver is a Royal Society of New Zealand Marsden Postdoctoral Fellow in the Religious Studies Programme at Victoria University of Wellington. His research is concerned with understanding how and why religions unite and divide groups of people, the effects of inequality on decision-making, and religious change in Oceania. To investigate these issues, he has conducted research in the Czech Republic, Fiji, Mauritius, New Zealand and the United States. Email address: jhshaver@hotmail.com

John Shaver is a Royal Society of New Zealand Marsden Postdoctoral Fellow in the Religious Studies Programme at Victoria University of Wellington. His research is concerned with understanding how and why religions unite and divide groups of people, the effects of inequality on decision-making, and religious change in Oceania. To investigate these issues, he has conducted research in the Czech Republic, Fiji, Mauritius, New Zealand and the United States. Email address: jhshaver@hotmail.com

The biennial conference of the New Zealand Association for the Study of Religions (NZASR) and the annual conference of the Australian Association for the Study of Religions (AASR) were held together in Queenstown, New Zealand from December 8-10 2015. Interdisciplinary perspectives and theoretical approaches across the humanities and social sciences were evident in the wide-range of papers presented. Islam, and Asian religions more generally, were the most consistent objects of focus, perhaps unsurprising given Australasia’s proximity to Asia and recent increased media attention to the Islamic State.

The conference’s emphasis on Asia and Islam were evident in the keynote lectures. In a talk entitled “Creativity and Ethical Life in India,” Tulasi Srinivas (Emerson College) described religious innovations in Bangalore and the sense of “wonder” that they often inspire. She argued that scholars ought to take emerging religious practices seriously, rather than as anomalies or deviations from established, textually-based understandings of religion. Turning to Japan, Douglas Ezzy (University of Tasmania) argued that Shint­ō is best considered a “religion of practice” in contrast to those traditional conceptions of religion as belief-oriented. He suggested that while a non-Christian can attend mass at a Christian place of worship and not be “doing Christianity,” a tourist at a Shint­ō shrine participating in its various ritual practices might be said to be “doing Shint­ō.” For many Japanese Shint­ō is not associated with doctrinal belief (shūkyō), which allows people to engage with Shint­ō ritual practice while not accepting its cosmology. Some in the audience disagreed with Ezzy’s analysis of Shint­ō and its relationship to shūkyō, but his call for a renewed focus on religious practice was generally appreciated. Sally McAra (University of Auckland), looked at one traditionally Asian religion, Buddhism, in the Australasian context. She discussed the problems facing an anthropologist conducting ethnographic research among their own group, principally a difficulty in carrying out objective analyses, due to a positive bias towards group ideals.

The final keynote lecture, from Gary D. Bouma (Monash University), turned to Islam and to Western discourses about the “threat” that each other poses. Bouma argued that both anti-Western and anti-Muslim narratives shared several key features: both narratives assert that the “other” is incorrect in some way; each is reinforced due to media bias; and both narratives are responsible for the perpetuation of conflict. Bouma’s most significant point was that Religious Studies scholars have a responsibility to discredit these discourses – particularly anti-Muslim narratives in the West, such as those put forth by Trump or Abbot. These narratives, Bouma argued, serve to legitimise attempts to gain power at the expense of civil liberties, and/or to divert attention from their own violence (including structural violence, domestic violence, or even climate change).

The panel “Contemporary Religions” continued the central foci on Asian religions and Islam. A paper by Douglas Osto (Massey) (based on his forthcoming book, Altered States: Buddhism and Psychedelic Spirituality in America, Columbia UP, 2016) outlined the history of “Psychedelic Buddhism” from the 1950s into the present, and the changing attitudes of American Buddhist practitioners towards mind-altering drugs. Osto described how some practitioners used psychedelic drugs as a “door” to advanced states of mind, before graduating to “pure” meditation practices, while others (notably Joan Halifax) continued to use drugs to supplement their meditative practices. Although psychedelia has been investigated before, Osto’s study represents the first serious examination of psychedelic Buddhism as a non-systemic religious movement, and is sure to lead to further studies of other hybrid Buddhist practices in the West. Buddhism was also the focus of a panel on “Buddhist Tales and Territories,” which featured a paper by Chaisit Suwanvarangkul (University of Otago) on the relevance of dharmakāya and the tathāgatagarbha doctrine to Therāvada Buddhism, as well as to the Mahāyāna. Suwanvarangkul’s paper was partially in response to an earlier paper by Michael Radich (Victoria University of Wellington), presented at the 2007 Australian Association of Buddhist Studies conference, entitled “There is no Dhammakāya in the Pāli Canon.” Suwanvarangkul’s inclusion of the Chinese Āgama as Theravāda was the subject of some controversy, as Osto pointed out that, despite parallels to the Theravāda nikāya, the Chinese āgama contain several key differences from the Theravāda texts. The panel also included papers by Anna Halafoff and Matthew Clarke (both of Deakin University) on the role of Songdhammakalyani monastery (Thailand) in promoting gender equality; Chiew Hui Ho (University of Sydney) on Chinese tales about the Diamond Sutra and their role in encouraging faith; and Phra Akbordin Rattana (University of Otago) on the model of Buddha devotion expressed in the Mārabandha chapter of the Paṭhamasambodhi-kathā.

Papers in the panel “Religion and the State” shared a common theme of distinctions between “religious practice” and “political actions” breaking down, in cases drawn from China, Japan, and Sri Lanka. Melissa Inoue (University of Auckland) discussed China’s True Jesus Church and its “miraculous” discourse. She argued that by directing attention to this-worldly affairs, the discourse indirectly both critiques and affirms contemporary Chinese society and the stewardship of the party-state. Ben Schonthal (University of Otago) turned to Sri Lanka and the (legal) case of a Buddhist monk who was denied an application for a driver’s license on the grounds that it was not appropriate for monks to drive. He argued that this was fundamentally a problem of contested authority over religious practice in Sri Lanka, arising from an ambiguous constitutionalising of religion. Bruno M. Shirley (Victoria University of Wellington) called for a post-secular rethinking of “religious violence” using the case study of Sri Lanka’s Bodu Bala Senā. Shirley suggested that explanations for religious violence, generally and in Sri Lanka specifically, have tended to assume a secularist dichotomy of “religion” and “politics” that is inadequate for dealing with the relationship between Buddhism, politics, and violence in Sri Lanka. Shirley suggested instead that we might reconsider this relationship within a framework of identity politics.

The panel “Naming Islamism,” was by far the most controversial of the conference. Will Sweetman (University of Otago), Christopher van der Krogt (Massey University), Douglas Pratt (University of Waikato), William E. Shepard (University of Canterbury), and audience members debated whether or not the Islamic State could be considered an authentic iteration of “Islam.” Van der Krogt argued that such a debate represents a misunderstanding of religion, and Islam in particular, while Sweetman argued that there is no basis for denying the Islamic State’s self-identification as Muslim. Several audience members disagreed with this assertion, instead arguing that Islam did indeed have some core norms and values with which the Islamic State does not conform. This panel also included less controversial papers by Shepard (University of Canterbury), on the development of Sayyid Qutb’s views on gender relations, and Pratt, on the Islamic State’s “theological ideology.”

Not all of the panels at the conference focussed on Asia or on Islam, and of these the New Zealand Attitudes and Values Study (NZAVS) panel is particularly notable for being the most empirically-oriented of the conference. The first NZAVS talk was delivered by the director of the study, Chris Sibley, a psychologist from the University of Auckland. Sibley described the breadth of the study and some of the many challenges inherent to large-scale longitudinal data collection. Joseph Bulbulia (Victoria University of Wellington) then detailed a few of the more significant findings pertaining to religion that have emerged from the NZAVS, including his work on the distinct “faith signatures” that span and defy traditional denominational categorization. Following these talks, Geoffrey Troughton (Victoria University of Wellington) described the history of the “Christian Not Further Declared (NFD)” designation in the New Zealand census, and then used NZAVS data to describe the demographic characteristics of those individuals that have recently come to identify with this tremendously growing group. The panel concluded with John Shaver (Victoria University of Wellington) describing the complex, but unique, picture of religion and prejudice/ tolerance in New Zealand. Although highly religious New Zealanders are more tolerant of many social groups (including ethnic and religious out-groups) than their secular counterparts, they are also less tolerant of some other groups (e.g., homosexuals). Shaver interpreted this pattern as a result of the differential flexibility of human values. He argued that those values associated with conservatism are necessary for the cultural transmission of religion and are therefore less free to vary across cultures, while those that are less relevant to transmission are subject to greater environmental influence.

Perhaps due to the University of Otago’s excellent choice to host the conference in scenic Queenstown, the conference was relatively well-attended by NZASR standards, and a strong Australian presence was a welcome addition to the conference’s academic and social events. While Asia and Islam were focal, the range of perspectives and disciplinary approaches made for interesting discussions, both in panels and informally. The conference demonstrated that the study of religions in New Zealand and Australia continues to broaden its interdisciplinary focus.