Putting an Umbrella Over a Bridge

Author’s cat demonstrating the utility of having an overarching framework for discussing topics pertinent to religious studies within interdisciplinary contexts. Trying to squeeze “(non)religious and/or (non)spiritual identifications, beliefs, and/or practices are important to [psychology topic] because…” into a 150-word abstract for a conference paper is cumbersome, at best. 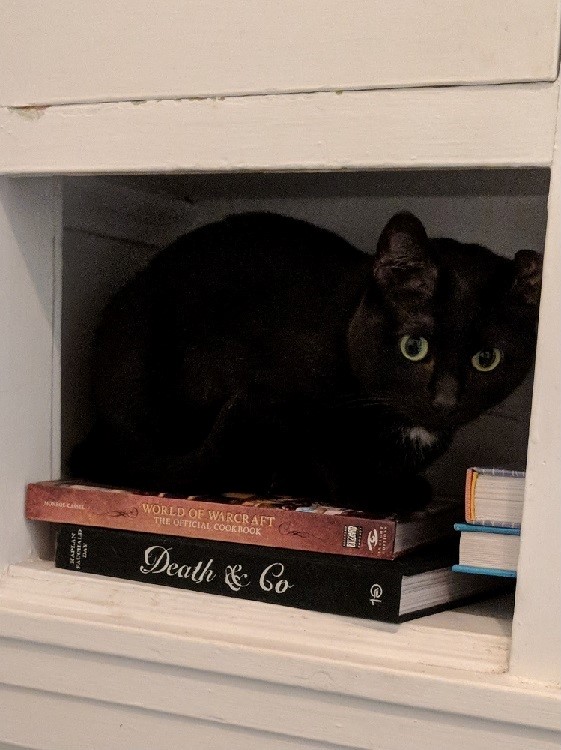 Ann Taves joins us to discuss her work arguing that we should study religions under the broader rubric of "worldviews" and "ways of life". This ambitious interdisciplinary project aims to place a micro-level analysis of individual worldviews into a broader evolutionary perspective.

A Response to “Worldviews and Ways of Life”

Trying to squeeze “(non)religious and/or (non)spiritual identifications, beliefs, and/or practices are important to [psychology topic] because…” into a 150-word abstract for a conference paper is cumbersome, at best. That’s partly why I’m so excited about Dr. Ann Taves’ (among others) work on “Worldviews and Ways of Life”. After all, that frees up twelve words for the abstract!

Having access to a model that has some promise for bringing parity and parsimony to researching and talking about belief and unbelief[1] would also be pretty great, sure. What are even better are the parallels between Dr. Taves’ formulation of worldviews and ways of life and the ideas about global/situational meaning making currently used in psychology research (Park, 2010). In trying to bridge different disciplines within (non)religious studies, it’s helpful to start building where the gap is particularly narrow.

Even more helpful? Clarifying[2] what all these terms are before digging further into the response. From the podcast, my understanding is that a “worldview” is the holistic package of “identifications, beliefs, and/or practices” containing the answers to the Big Questions[3] (What’s the meaning of life? What’s good? Etc.) held by an entity. As Dr. Taves explained, “entity” can be an individual, a group, or a formal organization; the model can be used regardless of which layer of the biopsychosocial onion you happen to be interested in. Her example of analyzing Alcoholics Anonymous’ “spiritual” worldview in the latter half of the podcast was particularly good. My understanding of “Way of life” is still somewhat fuzzy, but I picked up that it’s effectively what it says on the label: a broad term used to sum up what a given entity is actually doing.

Bridging over to psychology, global meaning systems seems to map onto the “worldview” concept of being a catch-all term for the totality of identifications, beliefs, and/or behaviors fairly closely (Park, 2005). The major difference here seems to be that a global meaning system has an explicit purpose in being used to cope with a life stressor of some kind, whereas a “worldview” is more all-encompassing. This difference is mirrored when looking at situational meaning-making versus how Dr. Taves described an enacted worldview. The system by which people either assimilating a stressful life event (i.e. cope with an event without changing their global meaning model) is a reaction to an event that’s a specific way of enacting a worldview.

Where things diverge in an interesting way is at “accommodation”: needing to change the global meaning model in the face of the event as part of the coping process. Dr. Taves hits on the idea that people might have a specific context in which their worldview/way of life becomes somewhat self-contradictory. She uses the example of a chronic pain patient who very much has a pro-science secular-sounding worldview, but turns to “alternative” medical approaches to try and reduce their pain. In the podcast, this idea doesn’t get fleshed out very much,[4] but seems to be an area that the meaning-making approach can add something. The assimilation vs. accommodation model might provide a good start as a hypothesized mechanism for how worldviews change or get enacted differently in different contexts, both within and between entities.

Going back to the Alcoholics Anonymous example, Dr. Taves highlights how AA’s official worldview can be constructed as almost generically “spiritual” and tries to avoid being religious so that nonreligious people can also participate. In reality, however, this might not work out in practice. The examples Dr. Taves lists in the podcast could be construed as ways individuals and sub-groups of AA assimilate the “official” worldview into their own worldviews and ways of life. That is to say, they adapt AA’s worldview to fit their own rather than vice versa.

So, there’s the bridge; now for the umbrella. “Worldviews” seem to work rather well to side-step the belief vs. unbelief issue, at least for those of us in the applied and “outcomes on measures of health and well-being” end of religious studies. At least for right now, using the language of worldviews and ways of life would likely be just as much of a kludge solution as having roughly fourteen thousand[5] different sub-terms for “(non)religious and/or (non)spiritual identification, beliefs, and/or practices.” But in accepting that kludge as an umbrella rubric to contain both secular and nonsecular[6] studies[7] it’ll provide more room for arguing over minute phrasing differences in a wide variety of other areas.

[1] My response builds, in part, on the response I wrote for the podcast “From Non-Religion to Unbelief? A developing field…” from Drs. Lois Lee and Christopher R. Cotter. If you’re interested in learning a bit more about unbelief research and how it applies to what Dr. Taves talked about, I’d strongly recommend Dr. Lee’s podcast as well.

[3] Feel free to use whatever Douglas Adams reference best floats your boat, here. My preference is to just think about towels.

[6] From now on I’m going to refer to “religious studies” as “nonsecular studies” whenever I’m wanting to be snarky while talking to other people in the field. “The Psychology of Nonsecularity,” HAH! Oh man, that’s great….

In this podcast, Chris Cotter is joined by Dr Stacey Gutkowski to discuss what it means to be a ‘secular Jewish Israeli millennial’.

Yoga, in its modern form, should be of great interest to scholars of religion. While it certainly has roots in Vedic culture, the vast majority of Western practitioners do not see it as "religious", but rather to do with health or "well-being". Yoga's status as religious has been in court, ...

After the World Religions Paradigm…?

In this week's podcast, We discussed some of the problems with the World Religion paradigm, most notably its colonial heritage and Christocentrism. Given its dominance in the public perception of "Religion", however, can we as teachers get away from it? Is there a pedagogical approach which focusses on issues of power and domination, and challenges, rather than reinforces, ...