"Climate change demands intellectual adaptation by scholars of all disciplines, religious studies included," writes Evan Berry in response to our interview with Robin Veldman on evangelical opposition to climate action. 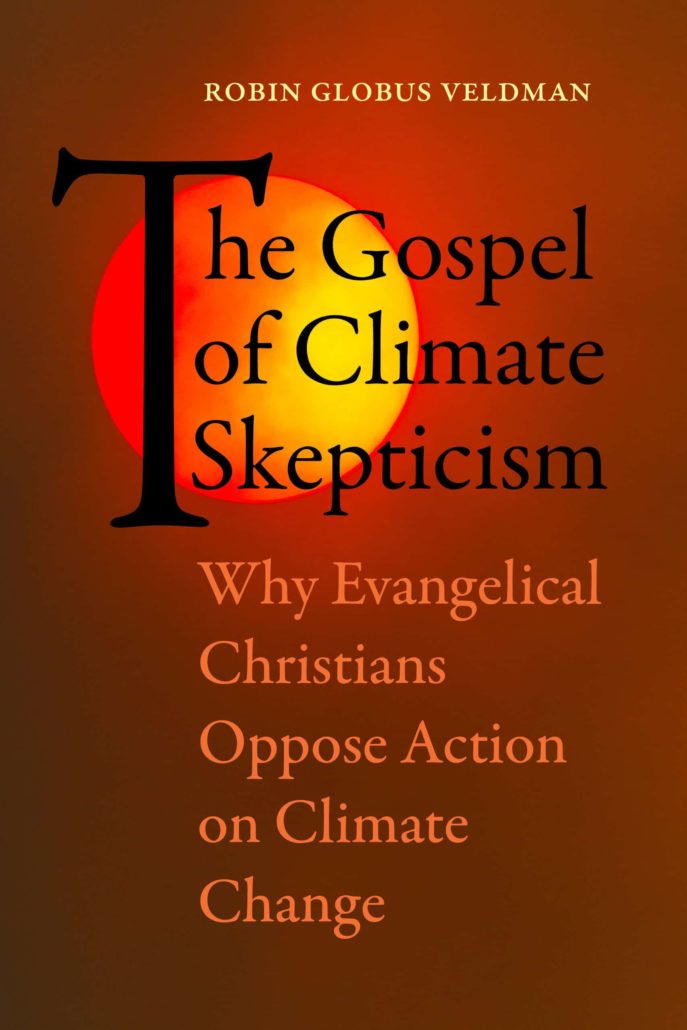 Evan Berry is Assistant Professor of Environmental Humanities in Arizona State University’s School of Historical, Philosophical, and Religious Studies. Berry is the author of Devoted to Nature: The Religious Roots of American Environmentalism (University of California Press, 2015) and editor of the forthcoming Climate Politics and the Power of Religion (Indiana University Press, 2022). He also serves as the President of the International Society for the Study of Religion, Nature, and Culture.
Twitter: @ecothought

Evan Berry is Assistant Professor of Environmental Humanities in Arizona State University’s School of Historical, Philosophical, and Religious Studies. Berry is the author of Devoted to Nature: The Religious Roots of American Environmentalism (University of California Press, 2015) and editor of the forthcoming Climate Politics and the Power of Religion (Indiana University Press, 2022). He also serves as the President of the International Society for the Study of Religion, Nature, and Culture.
Twitter: @ecothought

Evangelicals don't oppose climate activism for the reasons you think. Listen to expert Robin Veldman and find out why "embattlement" matters more than eschatology when it comes to rejecting climate science.

What is the impetus for scholarly research about religiously-inflected climate denial? It seems obvious that there is value in understanding how and why religion is and has been an obstacle to meaningful action to address climate change. But what is that value, exactly? Understanding the complex interface of religious life and climate politics is an important scholarly undertaking, one in which I, like Professor Veldman, have invested significant intellectual energy. Acknowledging the explicitly normative orientation of scholarship on religious climate denial raises many thorny questions about the ethics of ethnographic research, the impossibility of objectivity in religious studies, and, perhaps more interestingly, about how to elaborate modes of religion research that aim to be publicly impactful and socially transformative.

These questions are treated very directly in the outset of this episode of The Religious Studies Project. David McConeghy frames Robin Veldman’s work as “really informative for trying to understand how we can work with Evangelicals in the ways that they do think about the environment in order to enact the major changes that are going to be needed going forward… I think we all agree here at the RSP that climate change is a really big issue and that understanding the different factors that go into evangelical opposition to climate change are going to be really important to building coalitions and cooperations in the future.” Breann Fallon concurs, stating that “it’s only by understanding other points of view that we’re going to be able to tackle climate change from all directions.”

These are honest statements that closely parallel sentiments I frequently encounter among peers. Claims like these suggest a constellation of motives and assumptions animating scholarship on religious climate denial, which might be articulated as follows:

There is also a converse, yet largely unspoken, set of motives and assumptions that operate in parallel to these more transparent calls for climate-related efforts to advance the “public understanding of religion.” My attunement to these tacit features of scholarship on religious climate denial are indebted to recent publications by Erin Wilson (i.e. her forthcoming chapter on “Secular Climate Fear”) and Anna Gade (i.e. her sharp critique of environmental studies in the introductory chapter of Muslim Environmentalisms). These include the axioms that:

As a scholar who works in this area, spelling this all out explicitly brings into focus the theoretical and methodological quagmire that is religion and environment research. Speaking candidly, the climate crisis has become for me such an urgent, omnipresent matter that it calls into question my adherence to the norms that constitute the academic study of religion: from conference travel to the topics for introductory level undergraduate classes, from social taboo against collaboration between scholars and governments to the genteel conventions around ‘taking religion seriously.’ What good is it to play by the informal rules of institutions that are quite literally on fire? Crises precipitate change. Climate change is not just a problem to be solved, but a condition that we will live with for a very long time; and climate change demands intellectual adaptation by scholars of all disciplines, religious studies included. What does climate change portend for theory and method in our field?

First, as the work of decolonial scholars becomes more widely appreciated, our theories and methods increasingly acknowledge that the academic category ‘religion’ has never been neutral or objective. ‘Religion’ is a normative term, and we share with the discipline’s forebearers the temptation to differentiate between ‘good’ and ‘bad’ religiosities. What distinguishes our challenge today is a commitment to global justice and a strategic de-centering of North Atlantic Christianities. Rather than retreat into a comfortable discourse of scholarly objectivity, research on religion and climate change should compel us to articulate and defend the normative impulses guiding our work.

Second, we should take greater pains to elaborate the public dimensions of scholarship on religion and climate change. Research methodologies are the subject of extensive consideration, but the ‘public impact’ of research in the humanities and social sciences is a less developed area for theoretical reflection. Broader coalitions are quite often politically advantageous, but the work of broadening coalitions for climate action may require scaling back from the ambition necessary to secure the well-being of future generations. Work that engages white Evangelicals (or other groups that may oppose mitigation and adaptation policies) is tactical, not strategic. Seeking collaboration and cooperation is appropriate in some situations, but the broader strategic aim for work on religion and climate change should be explicitly stated: decarbonizing the economies of all the nations of the world in an economically equitable, and ecologically sustainable way and doing so rapidly enough to protect the maximal possible degree of well-being among living things, human or otherwise. Knowledge about religiously-inflected climate obstructionism can serve the purpose of coalition building, but it can also serve the purpose of pressuring, de-platforming, and delegitimization. This line of analysis may make many scholars of religion uncomfortable, but in this brave new world, we have little choice but to wrestle honestly with what it means to study religion as it intersects with a moral crisis.