Getting Less Precious About Parish Studies

Susan Bigelow Reynolds, in her response to our Season 10 episode with Alyssa Maldonado-Estrada, calls attention to how Catholic devotionalism is frequently essentialized and limited in its understanding. She argues instead for a "more expansive consideration" of Catholic ritual ecology. 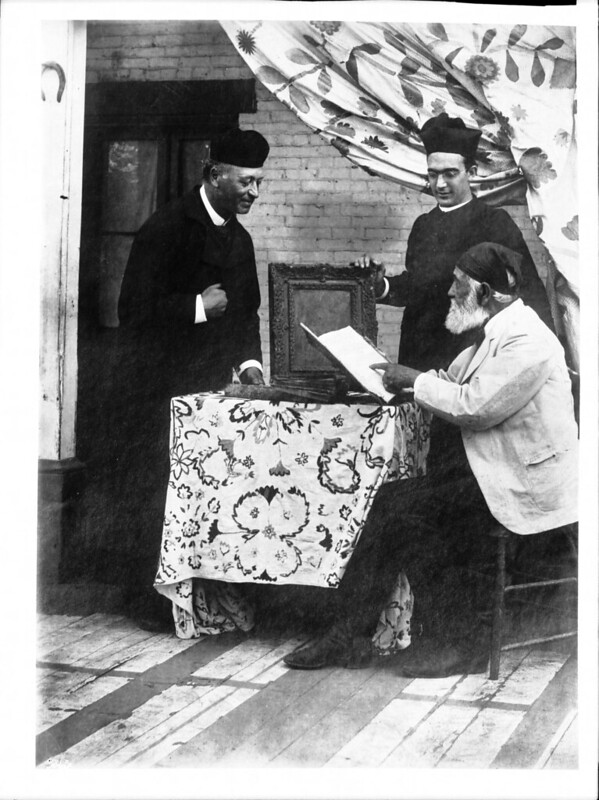 Susan Bigelow Reynolds is Assistant Professor of Catholic Studies and Interim Director of Catholic Studies at Candler School of Theology at Emory University. Her forthcoming book, People Get Ready: Ritual, Solidarity, and Lived Theology in Catholic Roxbury (Fordham University Press, 2022), is based on a five-year ethnographic study of St. Mary of the Angels Catholic Church in Roxbury, Boston.

Susan Bigelow Reynolds is Assistant Professor of Catholic Studies and Interim Director of Catholic Studies at Candler School of Theology at Emory University. Her forthcoming book, People Get Ready: Ritual, Solidarity, and Lived Theology in Catholic Roxbury (Fordham University Press, 2022), is based on a five-year ethnographic study of St. Mary of the Angels Catholic Church in Roxbury, Boston.

Getting Less Precious About Parish Studies

A Response to our interview with Alyssa Maldonado-Estrada

As a Catholic theologian and ethnographer of parishes, my research plays with the boundary line between theology and religious studies, between “lived religion” and “lived theology.” No single scholar has been more influential on my work than Robert Orsi, whose commitment to reading the devotional lives of Catholic city-dwellers on their own terms is unparalleled. Alyssa Maldonado-Estrada’s masterful, exuberant study of Catholic men’s devotional lives in Williamsburg, Brooklyn, deepens and broadens this commitment, upending Orsi’s understanding of gender and the body in the devotional ecology of a parish. Neither Maldonado-Estrada nor Orsi are theologians, but in many ways that makes them more, not less, willing to affirm the traces of divine presence where it lies—in basements and cash boxes, tattoos and papier-mâché, muscles and sweat, and above all, in the relationships that comprise the networks of everyday holiness.

In this response, I want to focus on one of the things I find most valuable about Maldonado-Estrada’s work, which is her ability to dispense with the “preciousness” with which scholars tend to approach devotional practice. Even as generations of lived-religion scholars have sought to upend the infamous sacred-profane binary, there is still a tendency to write off or misread the dimensions of parish life that appear most thoroughly “secular.” What is significant about spreadsheets? About schedules? About jokes? About money—not the social and economic imaginations that money represents, but about actual, physical dollar bills?

In one chapter of my forthcoming book, People Get Ready: Ritual, Solidarity, and Lived Ecclesiology in Catholic Roxbury (Fordham University Press, 2022), I tell the story of how, after Vatican II, laity at St. Mary of the Angels parish in Roxbury, Boston, seized on the Council’s notion of the parish pastoral council to place their parish into a relationship of solidarity with the surrounding neighborhood. Vatican II recommended the incorporation of laypeople into parish leadership in an advisory capacity, particularly with respect to its pastoral and apostolic work. Apostolicam Actuositatem, the Decree on the Apostolate of the Laity, laid the groundwork for structures of cooperation and collaboration between clergy, religious, and laity. But what exactly these new parish councils were supposed to do and how they were to be organized was not yet well-defined. Parishioners—most of whom were working class or impoverished Black and Caribbean Catholics—saw that ambiguity as an opening for the exercise of lay power. The first thing their newly established Parish Council did was to transfer the parish’s accounts to Boston’s only Black-owned bank, an act of concrete solidarity that was both financially and politically costly. The Parish Council also voted unanimously to request archdiocesan permission to celebrate the Sunday Mass on Saturday evenings during the summer, “on the basis of pastoral experiment.” Like the parish pastoral council structure, the anticipatory Saturday liturgy was an outcome of Vatican II whose implementation was still under development at the time. The change would address a “pastoral-liturgical problem which seems very evident during the summer season each year,” they wrote in a letter to the chancery—that was, “the unfortunate conflict between Sunday Mass participation and legitimate recreation outside the city on the one day when this is possible.” Sunday was the only day that working-class parishioners could get out of the city: “most of our people do not have the pleasure of a summer cottage or the luxury of weekends away from home. Economically, this is out of their reach. The only opportunity for any relaxation away from the oppressive pace and heat of the city is a day trip on Sunday.” (The Parish Council also offered an alternative plan: perhaps they could simply begin Sunday Mass at midnight instead!) While the chancery was incensed by the headstrong lay council, Cardinal Cushing eventually applied to Rome on their behalf for the dispensation necessary to celebrate the Sunday liturgy on Saturday evenings. The Vatican granted the dispensation, giving Cushing the authority to allow the accommodation at any parish in the archdiocese that requested it. In other words, Saturday evening Mass came to Boston as a lay-initiated response to the pastoral needs of a working-class, city-dwelling community.

In both of these cases, liturgical and structural change was as much tied to money, banking, labor, and the basic human desire for a weekend as it was to top-down institutional directives. The outcomes of Vatican II were transacted at the parish level in relationship to grassroots material, economic, and social realities. Yet within ecclesiology (the theological study of the church), things like parish finances and committee work are largely relegated to the realm of “pastoral concerns.” Indeed, parishes themselves are often juxtaposed rhetorically against spaces of serious theological thought—the so-called “people in the pews” are typically invoked to imply the distance between scholarly ideas and matters of everyday concern. I read Maldonado-Estrada’s call to “de-precious” scholarship on devotionalism as an invitation to think more generously and rigorously about the whole of parish life, beyond liturgy and the Eucharist.

I admit I’m weary of the descriptor “messy” to describe the lived practice of communities on the ground, but I’m not sure there are better synonyms. Devotional practice is messy. It’s dusty and junky and funny and weird and irreverent. Maldonado-Estrada’s work resonates so deeply in part because I trace my own religious formation to basement work. (Like any good ethnographer, I should situate myself reflexively, which in this case involves an admission of my profound pro-parish-basement bias). As kids, my siblings and I would spend summers with our great-aunts in the tiny Slovak-Catholic midwestern town of Streator, Illinois. There, we would pass entire days working alongside the ladies of the Altar and Rosary Society in the summer-long parish rummage sale. Gleefully, as though we were opening treasure chests, we would sort through boxes and boxes of donations—crocheted tissue box covers and Depression glass and dusty faux flower arrangements in sticky green foam, glow-in-the-dark Rosaries and promotional notepads emblazoned with cigarette brand logos, puff-sleeved prom dresses and men’s ties and heavy tan suitcases. We learned to count change from the cash box into the hands of shoppers and darted back and forth through the mysterious series of tunnels connecting church sanctuary to school cafeteria-turned-marketplace. These memories smell like humid concrete and dust and hairspray. My summers among the Altar and Rosary Society—and the accompanying sense of being admitted into the secret, backstage world keeping the parish alive—sparked a lifelong love affair with Catholic stuff, a fascination that still drives my parish-based research.

Theologians often appeal to notions of sacramentality to explain the distinctive Catholic approach to material culture. But appeals to sacramentality, even the most capacious, still miss something vital about the devotional work that takes place in basements. The basement work of sorting, discarding, folding, arranging, selling, and counting wasn’t ancillary to the Society’s more overtly pious tasks (washing and ironing and mending altar linens and the like). The embodied, communal work of the rummage sale was itself devotional. The money raised from the sale went to support the parish, but the sale wasn’t just a means to an end. I have to imagine that if one of the ladies suddenly came into an unlikely fortune and donated it all to the St. Stephen’s Altar and Rosary Society, the rummage sale would have gone on anyway. The women would still have gathered to re-home the community’s blouses and vases and planters for fifty cents or a dollar. The sale was an act of faith and community in ways that aren’t well captured by heavy-handed discourses on consumerism or by nebulous elaborations of “sacramental imagination.”

Within theological studies, discourses on lived religious practice, materiality, and economics often default to discourse about the Eucharist. This, too, is in its own way a legacy of Vatican II—in naming the liturgy as the source and summit of the Christian life, the Council deemphasized devotional practice (and, lamentably, a vital realm of lay agency). As a result, theologians expend tremendous (and frankly excessive) energy making the case that various dimensions of Catholic life, thought, and practice are somehow “Eucharistic” or “liturgical.” The implication is that such subjects are only worthy of serious consideration if one can prove their proximity to Eucharistic practice—and, by extension, to the exercise of clerical authority. In my work, I argue for turn from this myopic focus on liturgy and Sacrament to a more expansive consideration of the entire ritual ecology of a community. I see Maldonado-Estrada making a similar case from her place just on the other side of the porous religious studies-theology boundary.