By: Essi Mäkelä, University of Helsinki

A parody of religion will include elements that are accepted as religious within the society. This makes sure the parody is recognized as being targeted towards religion. Hence, a parody of religion will tell us what is accepted as a legitimate part of religion in the society where a parody or a joke on religion would be at home. Intuitively this includes nonreligious, irreligious or ”indifferent” people who have not found the official religion(s) to attend to their needs in interpreting life and the world. From this perspective it is understandable such parodies of religion would spur to life on a university campus, among students.

As with other religious activities, there are different levels of participation in this parody. At one end, some find beauty in the cermonies of the local church so they get married, baptize their children and bury their relatives using the services the church provides. Some find meaning in these practices and will pray and think about religious texts and meanings while occasionally participating at the church. At the other end lies complete devotion , with religion being a way of life and consuming most of the participants’ time and interest. This is also true for ”alternative” religiosity, such as paganism or ”Witchcraft” (McGuire, 2002: 122) – why not for ”fiction-based” or ”invented religions” (Davidsen, 2011; Cusack, 2010) too? For some, the parodies and sci-fi narratives are simply entertainment and fun. However, others seem to contemplate more deeply, finding a seed of truth in the parody and so come to refer to these narratives more often and more (or less) seriously.

In Principia Discordia, the book of Discordianism, there is a concept of The Law of Fives. Principia claims that there is a memo in ”The Erisian Archives” from Mal-2 (Greg Hill) to Omar Ravenhurst (Kerry Thornley) which says: “I find the Law of Fives to be more and more manifest the harder I look.” Come to think of it, this applies to all things in life. If you are concentrating on something, you will tend to notice a connection between almost anything and the subject you are meditating on. If you find a joke or a fiction good enough – ”so good it should be true” as Cusack puts it (podcast 14:00-14:35)– you will probably start seeing it manifest in the world more often than not. Even if it begins as a joke, the more a joke is told and applied to incidents in real life, the closer you may come to accepting the narrative as true.

This process can be analogised to the process of converting to any other religious (or, indeed, explicitly ”nonreligious”) group, where individuals build new narratives for their past life and explain experienced incidents from the point of view of the new religious community of conversion. In the case of Discordianism or the Church of the Flying Spaghetti Monster, the community might be no more than a collection of texts on the Internet. But the simple act of reading about someone who has – even jokingly – been reflecting on the original joke ”as if it was true”, might start a process of coming to believe in its literal truth.

For my Master’s Thesis, I have interviewed people who put a lot of emphasis on the philosophical worldview of Discordianism. According to questionnaires and face-to-face interviews conducted by myself and a student colleague, Hanna Lehtinen, in the winter of 2010/2011,  these individuals claimed to reflect on Discordianistic philosophical thought, and to utilise it in their everyday lives. When things get too tough, for example, a Discordian might find peace in the thought that this is just one point of view in the ultimate chaos within which everything is true, even false things… you just have to deal with it.

The terminological discussion surrounding these kinds of religions is indeed an interesting one. As Cusack points out (podcast 22:30-24:01), both invented and fiction-based religion have positive and negative connotations as definitions of a certain group of religious behaviours. Alternatively, David Chidester (2005) has used ”authentic fakes” as a description for religious behaviour which draws its inspiration from popular culture and which may be authentic religious behaviour but isn’t ”really” religious in the traditional sense – for example the First Church of Jesus Christ, Elvis. He takes Discordianism as an example of orchestrated fake religion which might bring about some authentic religious experiences. Having said that, ”authentic fakes” fails to describe these religions as well as ”invented” or ”fiction-based” religions, and includes the pejorative word ”fake”  which implies that these are merely parodies of religion.

As Discordianism is somewhat different from the religions that are explicitly built on an existent fictional narrative, in my thesis I don’t yet discuss the definition of the other religions. According to our small-scale study, Discordianism is more or less religious in its ”counter attack” on religious thought. Hence Hanna Lehtinen calls Discordianism a ”counter religion” in an article yet to be published. Starting from these building blocks, and the ongoing discussion surrounding ”invented religions”, I am sure it will be possible to derive new definitions for new religious behaviour, and bring the study of religion into the new millenium. 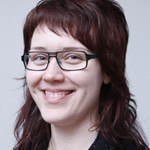 Essi Mäkelä is a Master of Arts student in Comparative Religion at the University of Helsinki. She is writing her thesis on how Discordianism fits into the theoretic framework of “liquid religion” as developed from Zigmunt Baumann’s “liquid modernity” by Teemu Taira, a Finnish scholar of religion.