"As the cognitive science of religion matures, there will no doubt be creative and exciting approaches to the current debates and to questions that are only beginning to arise in the field, such as how thinking about malevolent agents differs from thinking about benevolent ones. It is an exciting time for the study of religious cognition." In Armin Geertz’s recent interview with the Religious Studies Project, he provides an excellent overview of the methods and challenges in the cognitive study of religion and provides examples of some interesting theories and findings from the field.

Getting into Graduate School, and What We’re Learning from the Cognitive Study of Religion.

Getting into Graduate School, and What We’re Learning from the Cognitive Study of Religion.

Cognitive Approaches to the Study of Religion

The cognitive study of religion has quickly established itself as the paradigmatic methodology in the field today. It’s grounded in the concept that religiosity is natural because it is well adapted to the cognitive propensities developed during the evolution of our species. In this episode, Professor Armin Geertz tells Chris why it deserves its prominent profile, and how it is developing.

By Erika Salomon, University of Illinois at Urbana-Champaign

In Armin Geertz’s recent interview with the Religious Studies Project, he provides an excellent overview of the methods and challenges in the cognitive study of religion and provides examples of some interesting theories and findings from the field. I would like to delve a little further into this latter part by providing a brief review of some of the interesting and important work that has resulted from the cognitive approach.

As Geertz’s interview suggests, researchers in this field have largely focused on the idea that supernatural agents (beings with minds that can think and plan), are a central feature of religious cognition. Such beliefs take many forms and are found throughout the world—from the God of Christianity to the ancestor spirits of the Fang. Two of the most active areas within the cognitive approach to religion are explaining why such beliefs are so widespread and studying how they are like or unlike other kinds of thoughts.

The general consensus among researchers in this area is that humans are “cognitively prepared” for belief, even before they are capable of understanding the complex ideas of any given religious or supernatural belief system. Evidence from developmental psychology suggests that adult religious cognition may develop from a series of underlying cognitive biases displayed by children. Deborah Kelemen’s (1999) research, for example, suggests that children have a tendency (termed promiscuous teleology) to see natural objects as serving some kind of purpose—for example, that trees are for climbing. Lurking behind such statements is the premise that purposes are given by an agentic mind. Thus, this kind of teleological reasoning indicates an underlying belief in some being that intends objects in the natural world to serve some purpose. Similarly, in studying why adults and children both struggle to reach a scientifically-accurate understanding of evolution, Margaret Evans (2000) has found that, regardless of religious and educational background, children tend to develop towards creationist explanations for the origins of organisms up until about 10 years of age, only after which does background seem to influence these beliefs. These and a host of other biases (e.g., Jesse Bering’s simulation constraint hypothesis; see Bering & Bjorklund, 2004) seem like good candidates for precursors to religious thought in adults. The exact form that religious thought takes, of course, depends on the culture in which a person lives.

Cognitive scientists of religion are not just interested in how religious ideas originate in development but also in how such ideas work within adults’ minds. Geertz points out his own research, which suggests that at least some forms of religious thought are neurologically similar to non-religious thought. Such findings are compatible with the dominant theory in the cognitive science of religion—that religious concepts are constrained by the cognitive architecture of the human mind. Pascal Boyer (2001) has advanced the theory that humans have an innate ontology, a set of basic categories onto which all of our concepts are mapped. This ontology includes categories like human, animal, plant, and natural object, and each is associated with a set of properties. We attribute psychological, biological, and physical properties to humans, for example, whereas natural objects possess physical properties but not biological or psychological ones. Supernatural concepts are those concepts that violate the normal, intuitive properties of these categories. Thus, the concept ghost is based on the human category, but deviates from it by not possessing biological properties (i.e., ghosts do not need to eat, sleep, or perform the normal biological functions of humans). Experimental research by cognitive scientists such as Geertz and Justin Barrett has started to confirm that there are many similarities in how people reason about humans and supernatural agents. In a particularly clever set of studies, Barrett and Frank Keil (1996) found that, under cognitive load, participants seemed not to account for the counterintuitive properties of God. Instead, they reasoned that the supernatural deity would have to obey the normal laws of physics, despite explicitly believing that God need not follow such laws. For example, when asked to retell a story about God’s saving a drowning boy, participants who believed that God does not follow the normal rules of space and time inserted the detail that God finished answering a prayer somewhere else in the world before he began saving the boy, despite this detail’s not being in the original story. Like Geertz’s research, this suggests that human thinking about God and other supernatural agents is very similar to thinking about other humans.

One of the most active ongoing debates within the field involve the origins of religious thought, not just in individuals, but in humans as a species, and especially whether religious thought was selected for in the course of evolution. Many researchers, including Dominic Johnson, Azim Shariff, and Ara Norenzayan, adhere to some form of the supernatural punishment hypothesis (see, for example, Shariff & Norenzayan, 2011)—the idea that the threat of punishment from morally concerned supernatural agents helped humans increase cooperation and live in larger societies—though there are several version of this hypothesis and not everyone buys into it. This debate is exploding within the field and driving much new research into when and how religious thinking inspires cooperation.

Although cognitive scientists have begun proposing answers to questions about religious thinking, the field is quite young and there is still much to be studied. As the cognitive science of religion matures, there will no doubt be creative and exciting approaches to the current debates and to questions that are only beginning to arise in the field, such as how thinking about malevolent agents differs from thinking about benevolent ones. It is an exciting time for the study of religious cognition. 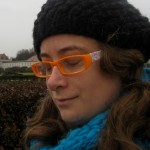 Erika Salomon is a graduate student studying social psychology at the University of Illinois at Urbana-Champaign. She has an MA in Cognition and Culture from Queen’s University Belfast and a BA in English from the University of Maryland. Her research focuses on religion and self-consciousness, religion as a social identity and moral community, and naturalistic thinking. She occasionally blogs about religious cognition at A Theory of Mind.