Conference report by Nathaniel J. Morehouse, PhD, University of Manitoba Between Thursday May 22 through Saturday May 24, the North American Patristics Society held its annual conference in Chicago. Attendance this year was an all-time high with nearly 400 members attending, and roughly 300 paper presentations over 75 sessions. It was also the first time that I had attended this conference. 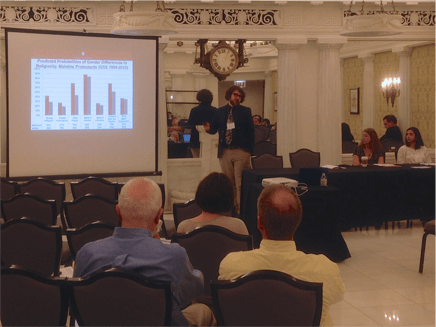 Between Thursday May 22 through Saturday May 24, the North American Patristics Society held its annual conference in Chicago. Attendance this year was an all-time high with nearly 400 members attending, and roughly 300 paper presentations over 75 sessions. It was also the first time that I had attended this conference.

Included in the sessions were two plenary lectures, the Preseditial address, and an after dinner address. The first of the plenary lectures was given by Christoph Markschies, Professor of Ancient History and Patristics at Humboldt-Universität zu Berlin. Professor Markschies’ lecture, “God’s Body: A Neglected Dimension of Ancient Christian Religion and Theology,” reminded his audience that while much of Christian theology supports the notion that God is formless this was far from universal in ancient Christianity.

David Brakke, the Joe R. Engle Chair in the History of Christianity and Professor of History at Ohio State University, will be stepping down as the editor of the Journal of Early Christian Studies, the journal for NAPS. Dr. Brakke also gave the second plenary lecture: “The Gospel of Judas: The Beginning and End of Sethian Gnosticism.” This presentation convincingly argued that the presence of the Gospel of Judas may require scholars of “the phenomenon formerly known as Gnosticism” to rethink what is commonly known as “Sethian Gnosticism.” The Gospel of Judas seems to fit into that group, however where it fits is a matter of considerable debate; is it early or late? Brakke, suggests that rather than attempting to shoehorn the text into the construct of Sethian Gnosticism we remember that it is precisely as construct based on the textual evidence. Consequently when we have new textual evidence that doesn’t fit into that construct, rather than attempting to make the evidence fit the reified construct, we should rethink the construct.

Robin Jensen, Luce Chancellor’s Professor of the History of Christian Art and Worship at Vanderbilt University, and outgoing President of NAPS, gave the Prudential Address. Dr. Jensen’s address, “Compiling Narratives: The Visual Strategies of Early Christian Art,” sought to demonstrate the was that early Christian art – especially sarcophagal art – differed from other contemporaneous art. In essence rather than depicting a large scene with deep relief on the sarcophagus, Christian sarcophagi tended to be much shallower in relief and was made up of a series of individual images (often in two layers as the image here depicts) which stood in for a much larger narrative. This became a sort of meta-narrative through the visual short hand of these unrelated images.

After the banquet conference attendees were treated to a presentation by Philip Rousseau, the Andrew W. Mellon Distinguished Professor at Catholic University of America. Professor Rousseau’s talk, “Intentio and memoria: Looking Ahead and Looking Back,” was a reflection on NAPS as a whole. While, he observed, “we are no longer North American or Patristics,” as there were attendees and presenters from beyond the geographical limits of North America, and there were sessions covering topics that have not traditionally been considered Patristics (as is my own work on martyrs), “we are still NAPS.” This is a commonality shared by all present and Rousseau urged the assembled scholars to remember that connection and take the time to meet each other informally.

Next year there will be no NAPS conference as members are encouraged to attend the XVII Conference on Patristic Studies in Oxford, U.K. which takes place August 10-14 2015. The North American Patristics Society will reconvene their annual conference May 26-28 the following year (2016) in Chicago.