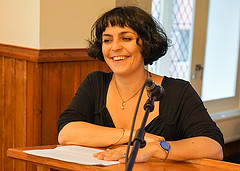 Véronique Altglas is a Lecturer in the School of Sociology, Social Policy and Social Work at Queen's University Belfast.

Her main research interests lie in the globalisation of religion, new religious movements, religious exoticism, responses to cultural and religious diversity in Britain and France, and anti-Semitism. She completed her PhD at the Ecole Pratique des Hautes Etudes (Sorbonne) in 2004, on the ways in which practices such as yoga and meditation have spread beyond Indian frontiers and been appropriated by westerners. She showed that the transnational diffusion of neo-Hindu movements was closely associated with a process of westernisation, because of their adaptive strategies and the way in which Western disciples appropriated neo-Hindu practices and values. In addition, this interpretation of the religious interactions between Western Europe and the ‘East’ revealed attitudes towards religion in contemporary western societies and contributed to a sociological understanding of processes of globalisation.