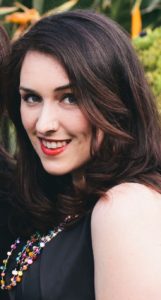 Venetia Robertson is a PhD candidate and Teaching Fellow in the Studies in Religion Department at the University of Sydney, Australia, where she teaches units in the history of religion, new religions, atheism, fundamentalism, and 'world religions'. Her PhD thesis analyses other-than-human identity subcultures as a nexus between spirituality, popular culture, and the Internet, and draws on her fieldwork with the Therianthropy, Otherkin, and Transhuman communities. This project expands on her interested in the mythologies and ontologies of otherness, and in particular animal, supernatural, and machinic subjectivities.

She has written numerous journal articles and spoken at conferences and on radio on a wide variety of topics including medieval and modern art, technology, digital cultures, fandom, religion, mythology, death, sexuality and gender. Popular papers of hers include 'Of Ponies and Men: My Little Pony: Friendship is Magic and the Brony Fandom' for the International Journal of Cultural Studies, and 'The Beast Within: Anthrozoomorphic Identity and Alternative Spirituality in the Online Therianthropy Movement' for Nova Religio. She was previously a guest editor for the Journal for the Academic Study of Religion and production editor for the Literature & Aesthetics in 2014. She is currently the Social Media Manager for The Religious Studies Project.

Conference report for The Religious Studies Project by our very own Venetia Robertson, RSP Editor and a PhD candidate at the University of Sydney. The University of Leicester hosted the Fandom and Religion conference this July 28-30 in affiliation with the Theology, Religion and Popular Culture network. A reasonably small conference with just over 30 presenters and 50 attendees, organisers Clive Marshall and Isobel Woodcliffe of Leicester’s Lifelong Learning Centre ran the event smoothly

Reflections on the 1st International Conference on Contemporary Esotericism

"What is important to remember is that esotericism cannot be essentialised – it is an emerging and expanding phenomenon and field of study. What one scholar does not investigate or consider becomes the domain of another as our scope progressively widens and diversifies."

Ends and Beginnings: A Reflection on the 2012 EASR Conference

"If I had to choose I would say my favourite thing about these conferences was seeing young and vibrant postgraduate students presenting their craft. I was continuously impressed and excited by the high quality scholarship, ideas, and conversations presented and stimulated by my peers." To open the 2012 conference for the European Association for the Study of Religions (in conjunction with the International Association for the History of Religion)...