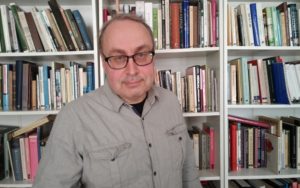 Ülo Valk is the Professor of Estonian and Comparative Folklore, University of Tartu. His publications include The Black Gentleman: Manifestations of the Devil in Estonian Folk Religion, and two edited volumes: Vernacular Religion in Everyday Life, and Storied and Supernatural Places. During 2003-2004 he was Fulbright Fellow at the Center for Folklore and Ethnography, University of Pennsylvania. During 2005-2009 he served as president of the International Society for Folk Narrative Research (ISFNR). His recent research has focused on belief narratives, place-lore, folklore in the social context, and vernacular Hinduism.

In northeast India, beliefs are more fluid than fixed, argues Ülo Valk in this week's episode. What are the consequences when what we believe changes over time and how does that impact the stories we tell about the world?