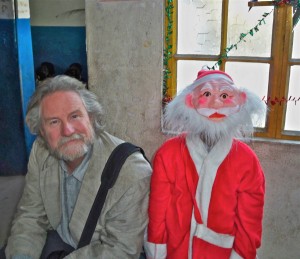 Stephen Jenkins is Professor of Religious Studies at Humboldt State University. He received his doctorate from Harvard University in 1999. Much of his career has been spent in Asia serving study abroad programs in India, Tibet, Nepal, Sri Lanka, and Japan. His research has been primarily focused on Indian Buddhist concepts of compassion, their philosophical grounding, and their ethical implications. Some recent publications include: “A Review Essay on The Taming of the Demons: Violence and Liberation in Tibetan Buddhism, by Jacob P. Dalton,” Journal of Religion and Violence, forthcoming, 2015; “Waking into Compassion: the Three Ālambana of Karuṇā,” in Moonpaths, Cowherds, Jenkins etc., New York: Oxford University Press, 2015, forthcoming; “Benefit of Self and Other: The Importance of Persons and their Self-Interest in Buddhist Ethics,” Dharma Drum Journal of Buddhist Studies, 2015, forthcoming; “On the Auspiciousness of Compassionate Violence,” Journal of the International Association of Buddhist Studies, Volume 33, Number 1-2, 2010 (2011), 299-331.

Of Demon Kings and Protestant Yakṣas

The disappointment of Western pacifists here is not unlike the reaction of early Orientalists who, disappointed by the ritualism and deity-worship they found in living Buddhist cultures, described a degenerate Buddhism. Let me begin by saying that this is not a critique, but an effort to contribute to a conversation about issues that have affected me personally as a scholar. In particular,...